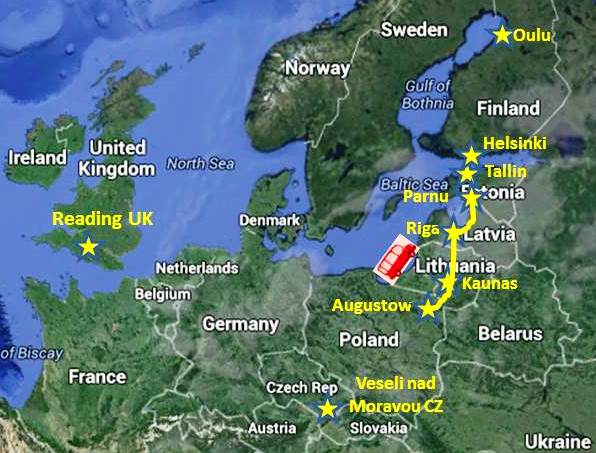 OK, day three of eXtreme botany on tour finds our eight intrepid barmy botanists (and a driver) heading out of Poland into Lithuania, Latvia and ending up (more by luck than judgement) at a forest campsite on the Baltic coast of Estonia, near the town of Parnu.

At around 600 km (ca 370 miles) this is not as eXtreme as day 1 but bearing in mind we had stop-offs in Kaunas (Lithuania) and Riga (Latvia) and got lost in Estonian forest (!) still not a bad distance!

Things not to do in Lithuania:

Setting off from Augustow, Poland and once over the border into Lithuania we stopped off at a service station. Immediately we were confronted with a number of notices outlining the do do’s and dont’s of comfort breaks and pointing out the photographic consequences naming and shaming of any such misdemeanors!

Of course we had been planning no such wild behaviour and politely utilised the appropriate facilities in the service station at a cost of one small bit of local coinage per person (In Lithuania currency is measured in Litas conveniently similar to the currency of beer – Litres!) , or free to all in the adjacent McDonalds! 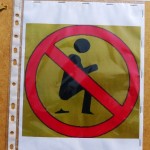 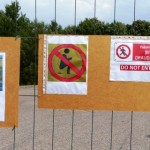 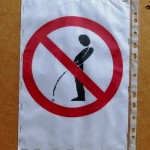 Comforting over, the group headed into Kaunas one of the major towns in Lithuania. Finding it not too busy, our driver was able to make an easy parking in the town centre and we headed out for a short walk in the old city guided by our very own Dignified Professor and historyphile.

Kaunas is the second-largest city of Lithiania (the first being Vilnius to the east) and is a leading centre of Lithuanian economic, academic, and cultural life.  Kaunas is located at the confluence of the two largest Lithuanian rivers, Nemunas and Neris.

In the main square we saw the very beautiful Town Hall building which is known as the White Swan due to the purest white and elegance of design.

In the old town we heard a young girl in national costume singing folk songs. According to our guidebook, there is a long history of folk song in the Baltic states and especially in Lithuania where no fewer than 800,000 folk songs have been noted. This remarkable vocal fact resonated both with Dr M and his colleague Karel F both being avid singers. 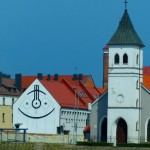 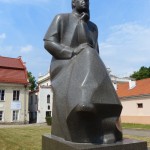 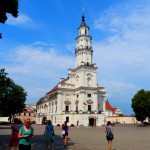 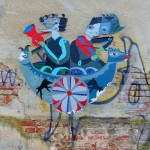 Just a bit of fun 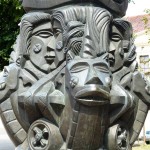 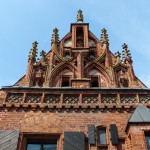 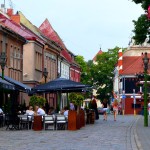 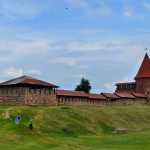 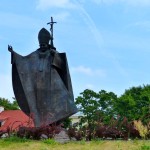 Some botany in Kaunas

Dr M checked out the flora of the town finding many familiar plants including common ruderal species in the bare and disturbed ground around the town. But Dr M also spotted a few less familiar plants including Herniaria glabra (Smooth Rupturewort – Caryophyllaceae) which was frequent on cobble stones in the main square and looking very dry in the recent unseasonally hot and dry Lithuanian weather.  Also Medicago falcata (Fabaceae) a native of the Mediterranean basin but found throughout Europe. Finally, Dr M was struck by the rather striking dock is Rumex thyrsiflorus (Polygonaceae) with conspicuous long, almost fluffy looking inflorescences and with foliage not unlike the UK native Rumex acetosa. 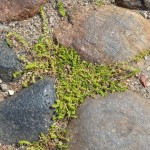 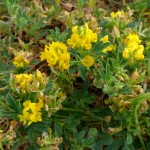 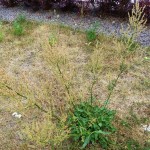 Later afternoon we entered Riga this is a big city and we found traffic conditions definitely less conducive than in Kaunas. Eventually, our driver irritated with the traffic jam pulled over into an available parking area giving us surprisingly easy access to the town centre.

Very hungry by now, we weren’t so fixated on old buildings and the numerous sculptures around, but quickly settled on a local fish restaurant. Here we found our driver in mid feast and very happy to provide a photo-opportunity for Dr M by jingling a little mermaid bell souvenir.

Thirst quenching beers and locally caught fish dinners followed. Possibly we dallied a tad too long over this bearing in mind this was the one day of the trip where accommodation had not been booked and we were reliant on finding somewhere for the night on spec. Better get a move on then! 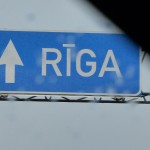 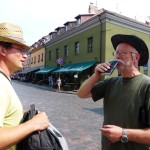 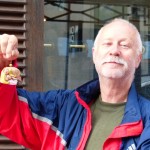 Mermaid for a driver 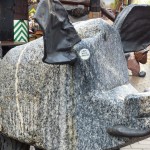 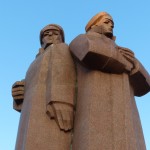 After dinner the plan was to drive from Riga out of Latvia and find a hotel in adjacent Estonia since we had a guided walk in the famous wooded meadows booked for the next morning. So we drove across the border into Estonia and started looking for suitable hotels for the night. Turned out not quite as easy at it seemed!

Yes, there were plenty of campsites overflowing with tents and caravans, but hotels? Not exactly thick on the ground! Eventually, we were encouraged to see a sign indicating a hotel down a side road. So, we turned off down this forest road, passing many tents and caravans and with sight of the lovely Baltic sea, but did we find a hotel? No such thing! And our driver was getting increasingly and audibly rather exercised and concerned on the matter!

A passer by advised us to continue to the next town and en route we finally found a camp site not only with tents and caravans but also with wooden cabins, hope at last? Well we found several such camps in fact, but all were full to the rafters with happy campers and no room for eight barmy botanists, not to mention a driver!  We learned from the camp owners that a regional festival was in full swing and we could expect everywhere to be filled to the brim!

At last one camp owner pointed us in the direction of another campsite owned by a friend of his where, he suggested, we might just find beds for the night.  We relished this glimmer of hope and drove on, following the directions, and soon we found the camp and indeed there WERE vacancies!

Exactly one vacancy in fact; one cabin with 2 bunks and 3 beds sleeping a total of just seven, and we, of course, were a grand total of nine – eight barmy (and now exhausted) botanists and a driver (even more exhausted).

Well beggars, and barmy botanists, cannot be choosers, and so of course we snapped up the cabin and our Dignified Professor and Kamila one of our hardy post-grad students, agreed to sleep outside (yes with sleeping bags!) on the long table and on the ground respectively! A hardy breed the Czechs!

Dr M amused the now very sleepy crowd of barmies by singing some new verses of his recently composed “eight barmy botanists in a bus” song and insisting on a verse going something like: “there were eight barmy botanists in a bus (and a driver) all sharing one bed…” and only adding the word “room” after a dramatic pause! Oh how they laughed, but they laughed quietly as it was late, and they did not want to disturb all the other campers! A very well behaved bunch of barmies!

Even though it was going to be very cosy sharing one bed (room!) we were highly relieved  having settled ourselves in and a sub-set of the eight barmies (i.e. Dr M,  Karel F, Ivana and our Dignifed Professor) decided there was only one thing for it, a nightcap!

So the hardcore subset of barmies sampled from the bottle of Teachers whisky Dr M had brought from UK for just such an occasion.

Interesting late-night discussion ensued, mainly, it must be said, on the subject of alcohol. Our Dignified Professor related a story from his travels in the extreme north of Europe where the mix of locally distilled alcohol and peach juice goes by the vernacular name “Sperm of Polar Bear.” apparently that’s exactly what it looks like! But I suspect that’s where the similarity ends, 100% alcohol was never great for procreation. 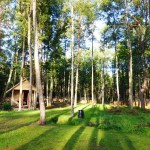 Forest camp in Estonia near Parnu 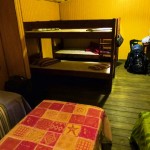 Room for 8 barmy botanists (and a driver) inside? 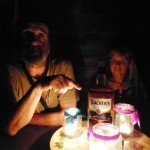 Here are some more verses (more or less scanning!) of the eight barmy botanists song composed by Dr M to relate the adventures of the day driving through the Baltic states of Lithuania, Latvia and Estonia: