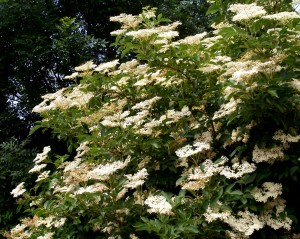 Earlier this year Dr M wrote posts on two beautiful white flowered shrubs or small trees common in the British countryside and which tend to bloom in sequence from spring into summer.  Blackthorn (Prunus spinosa) starts in April, followed by Hawthorn (Crategus monogyna – flowering in May. The final plant in this trio is Elder (Sambucus nigra) usually flowering from June into July, but due to the recent warm weather has been spotted in full flower from mid-May! 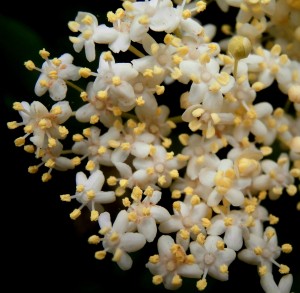 Identification: Flowering time (though very weather-dependent) helps separate these three white-flowered shrubs.  Elder is in the Caprifoliaceae or  Honeysuckle family and bears creamish-white flowers with 5 petals fused into a tube and arranged in a saucer-shaped inflorescence (a corymb). The flowers are pollinated by flies probably attracted by the gross cat-pee like Elder odour!  Elder is also easily told apart from the other two white flowered plants by its opposite leaves (Blackthorn and Hawthorn have alternate leaves) its grey bark with prominent lenticels (breathing pores) and extensive soft white pith (split the twigs to reveal this).

The Elder tree is bounteous and the flowers are used throughout Europe to make a refreshing cordial or sparkling wine or even Elder flower fritters.  The black berries ripen in Autumn and are used to make a variety of preserves, soup, champagne, wine, snaps or brandy – depending on your taste and geographical locality as well as various medicinal uses e.g. for respiratory ailments!

Of course these are just the three commonest of the white flowered shrubs in Britain, there are plenty more, how many can you spot?