Home   Dicots   White flowered trees in the hedgerow 2: The May Tree! (Crataegus monogyna)

White flowered trees in the hedgerow 2: The May Tree! (Crataegus monogyna) 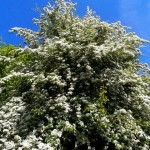 Hawthorn or May Tree 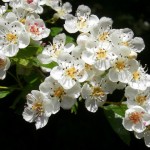 Earlier this year Dr M wrote a post on the beautiful Blackthorn, Prunus spinosa one of the several white flowered shrubs native to Britain which tend to bloom in sequence from spring into summer.  Blackthorn usually kicks off the year being at its best in April, the clear white flowers of Hawthorn usually follow in May (indeed ‘May’ is one of the common names of Hawthorn).  A third white-flowered hedgerow shrub, Elder (Sambucus nigra) adorns our hedgerows after the May Tree (Crataegus) in June and July.

Identification: Atypical years apart (when Spring is especially late or early) flowering time helps separate these three white-flowered shrubs, but Elder (in the Caprifoliaceae) is easily told apart from the other two by its grey bark with prominent lenticels (breathing pores) and when you split the twigs there is an extensive soft white pith and the whole plants reeks with that characteristic rather gross, cat-pee like Elder odour!  Blackthorn  and Hawthorn are both in the Rosaceae and so are more similar to each other, but it is still pretty easy to tell them apart.  Hawthorn, has greenish brown or dark grey twigs with lateral thorns, angled, not perpendicular and with no buds on them, the shiny leaves are characteristically deeply and variously lobed. Blackthorn, on the other hand, has dark, even black twigs, bearing perpendicular lateral spines and also terminal spines, the spines themselves may bear buds and flowers, the leaves are narrowly oval and toothed.  Later in the year the fruits are very diagnostic being purplish ‘sloes‘ in Blackthorn and red ‘haws’ in Hawthorn.