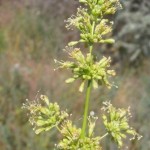 Dr M is busy surveying in Romania north of Constanta on the Black Sea coast, nice work if you can get it, although the swarms of ferocious Mosquitoes are something else!  The vegetation I have been surveying includes coastal sand dunes, marshes and steppe grasslands. From my botanising, I find that the plant families are generally familiar here (loads of Asteraceae and Brassicaceae for example!) but there are lots of species new to me (obviously as we are in the confluence of several biogeographical regions this far east in Europe!*). So let’s take as an example, Silene (Caryophyllaceae) are the Catchflys – so called because many of them have sticky bands on their flower stems which may ensnare small flies!  There are about 13 species of Silene considered native to the UK (according to the book of Stace) compared with about 40 for Romania.   Another notable thing is how frequent, or even common, are some plants here which are very rare in the UK.  Two examples, again from the genus Silene:

Firstly is Silene conica (The Sand Catchfly), a nationally scarce plant in the UK where it is an annual of open habitats on free-draining sandy soils. It’s a diminutive plant but I have found it many times and have been admiring it’s characteristic features of opposite decussate-leaves, 5 notched rose-coloured petals and (as the Latin name suggests) the calyx becomes conical surrounding the seed-bearing capsule in fruit.  Here in Romania I have found this quite frequently and prettily in the coastal dunes and steppe grasslands.

Secondly, is Silene otites (The Spanish Catchfly), nationally rare in the UK, where it is pretty much confined to the shallow, well-drained, light calcareous soils of the Breckland grass-heaths in East Anglia, but here I have been seeing it in droves! So frequent in places and such robust plants that at first I had to check what it was to be sure! It has again, the familiar opposite-decussate leaves of Caryophyllaceae, the flower stalk is indeed sticky as befits a catchfly, and the flowers are dioecious (quite common  Caryophyllaceae) which means there are separate male and female flowers, and the petals are greenish-yellow and rather inconspicuous and so a bit atypical for Silene!

*To be precise: Romania has elements of all the following biogeographical zones: Arctic, alpine, Western and Central European, Pannonic, Pontic, Balkanic, sub-Mediterranean, and even Eastern Colchic, Caucasian and Thuranic-Iranian regions.