Your starter for ten and no conferring: what is the closest score line you can imagine for Botanical University Challenge?!  Well read on to find out!

On Wednesday 20 February 2019 the second ever Botanical University Challenge in the UK was held at the University of Reading.  Six intrepid botanical teams travelled to Reading for a botanical contest in the style of the well-known BBC TV Quiz show.

From left to right below the teams were: Back row: Manchester Metropolitan (MMU) and Edgehill, Front row: Liverpool, Reading, Southampton and Kew.

Botanical University Challenge was the brainchild of Drs John Warren from Aberystwyth and Dr Jonathan Mitchley (aka Dr M) from Reading and between them they launched the very first challenge at Kew Gardens in 2016 with James Wong as Chairman(check it out here).

Botanical University Challenge 2019 was the official launch of Reading Botany 2019 – a year of events celebrating 50 years of master’s botany at Reading (check the other events here).

The format of the contest was decided by drawing names from the hat, or rather from the bespoke gong – a sonorous aluminium mixing bowl provided by Dr Alastair Culham – and the first round heats saw Reading pitted against Kew, Liverpool against Southampton and MMU against Edgehill. 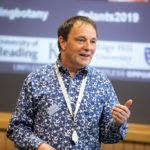 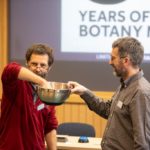 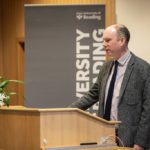 Our Chairman was Dr Chris Preston from CEH Wallingford and the first heats included questions on such diverse topics as botanical terminology, Chinese medicine, plant ecology and habitats, Shakespeare’s flowers, commercially important plants and plants and alcoholic beverages in which the team from MMU seemed to excel!

Picture rounds added extra interest and included apple varieties, grasses, leaf shapes, winter twigs, plant families and houseplants. One novel round was called “fragments of floras” in which small sections cropped from the covers of well-known plant ID books were shown from which contestants had to identify the whole book, sounds easy but actually proved quite a challenge!  The victors in the first round heats were Reading, Southampton, MMU and Liverpool who went through as the highest runners up. 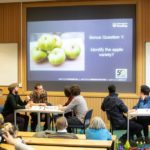 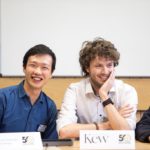 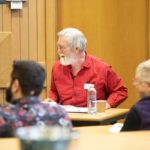 After a well-earned break came the semi-finals: Southampton against Reading and MMU against Liverpool.  Semi-final questions saw the level stepped up a notch with questions on famous botanists, spices, plants as indicators, poisonous plants, alien plants and a round on plants and beverages, but this time the teams did less well, possibly since the examples here were non-alcoholic beverages!  Picture rounds included seeds and fruits and recognising plant families from flowers and from vegetative rosettes.  All teams put up strong fights but in the end it was Reading and Liverpool who went through to the final!

The final saw the tension build as was witnessed right at the outset when Reading incorrectly anticipated a question putting Reading into negative position!  Liverpool capitalised on their early lead with rapid buzzer action and questions on cladistics, Greek mythology as well as some light relief in a round entitled “Carry on Botany” (sex and innuendo in botany!).

But undeterred Reading fought back answering questions on plants and fungi, Sphagnum (bog mosses), sedges and a round based on the festive social media series #AdventBotany. It was not long before the teams were neck and neck and as the final gong sounded the score line was: Liverpool 120 – Reading 120! 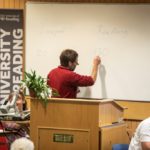 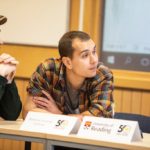 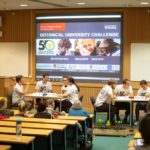 So, the final resulted in a draw for which the only solution was to move into a sudden death tie-breaker. Chairman Chris Preston, took a moment to compose himself and then when an expectant hush had fallen across the room he set the first question for the tie break: “how many vice counties are there in Britain?”  A deceptively simple question if you know the answer!  But the two teams fell long and then short of the correct answer which was 112!

So onto the second sudden death question continuing the county theme: “which was the very first country flora to be published?”  A very confident buzz from Reading and the one line answer – C A M B R I D G E S H I R E – and it was all over! Reading had won the auspicious title Botanical University Challenge Champions 2019.  But a win by a whisker with Liverpool the very worthy runners up!

You couldn’t make it up and, as Dr M said in his closing words, “it really doesn’t get any closer than that!” 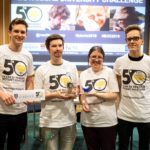 The worthy runners up – Liverpool 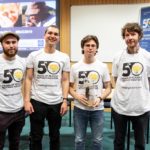 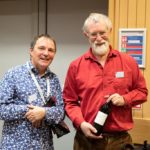 Dr M thanks our chairman

It remained for everyone present to offer huge applause and hearty congratulations to the winners and the runners up and the award of the trophies especially designed and made by Dr Alastair Culham.

The general consensus was that the audience and botanical teams had been treated to a great afternoon celebrating the beauty, fascination and importance of plants and the botanists who study and teach it.

This was a fantastic start to Reading Botany 2019 celebrating 50 years of masters teaching at Reading and an overall and outright victory for BOTANY!

Dr M says: We look forward to the next contest, and we can confirm – you heard it here first – that Botanical University Challenge 3 will be held next year, 2020, at the home of our awesome runners-up Liverpool!  Watch this botanical space for more details!

Our contestants with their BUC2019 collectors-item T-shirts!