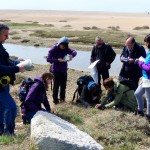 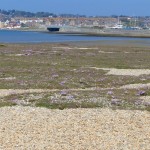 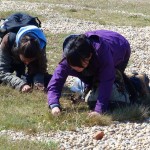 …and the adjacent great shingle spit of Chesil beach – fascinating geomorphological form comprising 18 miles and 180 billion pebbles (allegedly!) – but not much vegetation there! 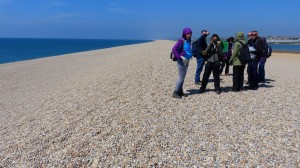 Then after lunch the group moved along the Jurassic coast to the stunning geology of Lulworth Cove and adjacent chalk grassland. 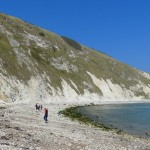 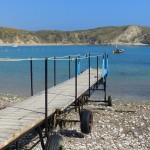 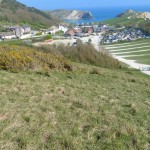 Dr M says:  I remember a BBC film “Nuts in May” directed by Mike Leigh where a middle-class couple called Candice-Marie and Keith go camping in Dorset for some peace and quiet close to nature, but they find none of it and get heartily upset!  You’ll recognise some of the landmarks, such as Lulworth Cove (which is what set Dr M remembering), and some of the characters were definitely there too! It’s a hoot, check it out here and sing along (there is a song, and it’s all about nature!).

Next stop the Eden project: watch this space for a report from England’s major botanical theme park!