Home   Dicots   Boys and girls come out to play!

Boys and girls come out to play!

We’ve had bluebells galore, so about time for some other woodland plants.

Dog’s Mercury (Mercurialis perennis) is a member of the Spurge Family (Euphorbiaceae) and as with other members of this family the flowers are dioecious, i.e. there are separate male and female flowers. And in Dog’s Mercury this is taken a step further and the male and female flowers are actually on separate plants, i.e. there are separate boy and girl Mercury plants!

So with boys and girls separated, is it a case of never the twain shall meet?  Well obviously never say never, there must be at least a little botanical hanky panky or the whole mercury species goes down the pan, thank heavens for wind-borne pollen!

Dog’s Mercury is a rhizomatous perennial plant, with opposite, toothed leaves and forming dense monospecific stands in woodland, especially on calcareous soils, and although you can fine Dog’s Mercury and Bluebells the same wood, the Mercury is usually somewhat separated from the Bluebells which favour the more acid soils.

In fact there may be several degrees of separation even for the Mercury itself.

Some have suggested that the clonal patches of the male and female Mercury plants are spatially separated. The idea is that the boy Mercuries occur in the more open areas where there is plenty of fresh air to blow their pollen about, while the girl Mercuries huddle in the more sheltered places, because, well because they’re girls and need sheltering and nurturing?

Actually Dr M is not convinced that the boy and girl Mercuries really play in different playgrounds so to speak.

In fact the pictures below were taken in a wood where the boy and girl Mercuries were in close proximity. But it’s a nice story and there ‘aint nothing like a nice story! 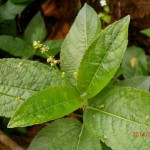 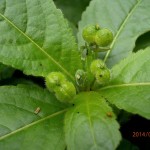 Anyway why not check it out for yourself next time you are in a Mercury wood, and here are the botanical details to help distinguish boy and girl Mercuries, it’s easy once you know how:

The male flowers occur in erect, catkin-like spikes in leaf axils, each with 3 green sepals and 8-15 stamens.

Female flowers occur in groups of 1-3 on long stalks each with 3 sepals and rounded ovary that forms a 2-celled hairy fruit. The leaves on the female plants are often somewhat wider than on the male plants.

Contact Dr M with your observations on the distribution of Dog’s Mercury in your patch!