Day 3 of #Botanybus2015  – University of Reading MSc Plant Diversity field course headed toNational Trust Studland beach to investigate the plants and vegetation of the sand dunes which have developed over the past 3 or 4 centuries forming a large part of the South Haven Peninsula, near Poole Harbour, Dorset. 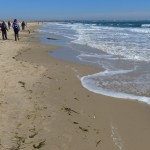 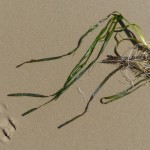 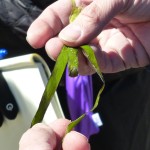 After parking the #Botanybus2015 in the carpark the group walked the length of Studland beach from the car park to reach the dunes and during this walk it was Dr Alastair Culham who first noticed a green plant washed up on the shore. Could it be a seaweed?

Well it did have linear green leaves like some seaweeds, but the leaves bore conspicuous parallel veins and there were obvious roots, and these were not just a seaweed holdfast, but proper vascular plant roots. Neither of these are features of green algae, so what was this mystery plant?

Well, this was no seaweed but a vascular plant, Zostera marina a Seagrass (though NOT a true grass but a member of the Zosteraceae) and one of only a very few true marine vascular plants and which grows in dense beds (Seagrass beds) in shallow water.

The washed up plants along the beach had perhaps been disturbed by fishing activites or by storm damage. A number of specimens, including some with developing flowers, were collected for the University of Reading herbarium (RNG).

Moving on, the group reached the fore dunes where there is Leymus arenarius (Sea Lyme Grass) and Elymus atherica (Sand Couch) on the seaward edge, giving way quickly to the dominant cover of Ammophila arenaria (Marram Grass). 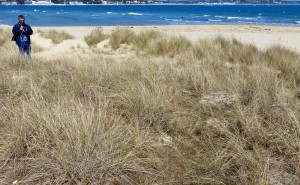 The dune system is composed of highly acidic sand and behind the stabilised dune vegetation there is dry heathland in which Calluna vulgaris (Heather or Ling) is dominant. There is a very conspicuous heathland lichen community with Cladonia portentosa and many other species. 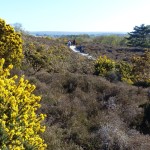 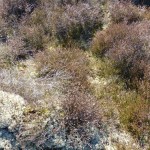 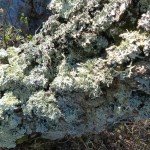 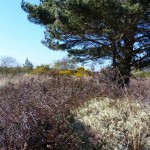 The intervening dune slacks occur on lower ground with a high water table and here the conditions are conducive to development of dune slack vegetation and wet heath with acid mires and bog pools and here grows the rare Erica ciliaris (Dorset Heath) and Lycopodiella inundata (Marsh Clubmoss). 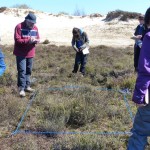 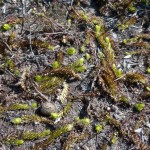 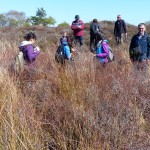 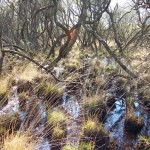