Home   eXtreme botany   Dr M Lizard Diary Day 1: To quadrat or not to quadrat that is the question…”

Dr M Lizard Diary Day 1: To quadrat or not to quadrat that is the question…” 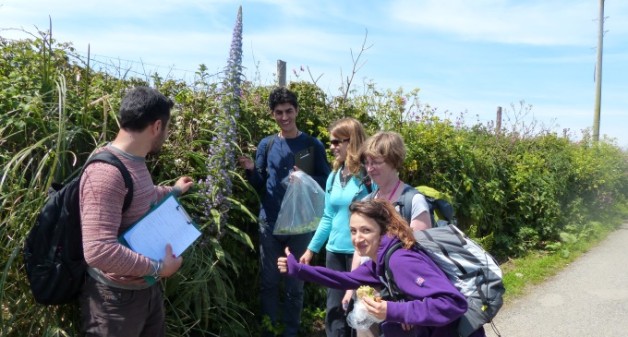 Sunday 18th May: First day at the Wonderful Lizard!

Botany starts early with this group, and barely was breakfast over than the group was off in search of Ranunculus parviflorus (Small-flowered Buttercup) in the barer, scuffed areas of the camp site lawns. A species of special interest to this group as it had made a brief appearance on University of Reading campus last year, though sadly its rapid demise in the same year was probably due to rather over-zealous use of herbicides by grounds staff!

The Ranunculaceous exercise over, the group bundled into Dr M’s Botany-Express and set off for the  Lizard village car park.

‘Tis a well-known fact that drop a group of botanists in a car park, and they will spend a literal age checking the diminutive, trampled and dwarfed plants there, and this group was no exception!

Indeed a goodly long period was spent right by the Botany Express checking a little white and very trampled clover – Trifolium ornithopodioides (Bird’s-foot Clover), Trifolium being one (of many!) botanical speciality of the group’s resident botanical magician: Wizard Carter. 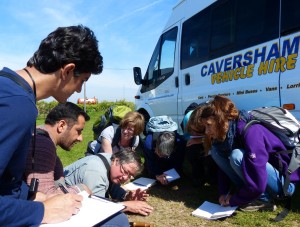 Once extricated from the car park (and heavens it wasn’t an easy job!) the botanical group headed down the lane in the direction of the cliffs, but only in the direction thereof, as again much time was needed to examine the native and naturalised plants in the garden walls.

During which Dorothy (previously a self-confessed Poaceae-denier) excelled herself by identifying five Poacaeae pretty much in one go! The Lizard has this effect on botanists!

In amongst the Poaceae was also spotted Valerianella doing very well indeed (i.e. growing big!) which we refrained from IDing in-situ. Instead a sample was bagged up to take back to check the species with the aid of the book of Stace, who Wizard Carter assures us, offers a very fine (even amusing) line in couplets for distinguishing the main Valerianella species from the characteristics of the ripe fruits. More of that in a later post!

On the lane towards the cliffs a Fabaceae was noted in a hedge and both Lathyrus or Vicia were offered as likely genera, the plant having just a couple of pairs of leaflets and branched tendrils.  So which genus was it? Well, Dr M recalled a neat trick for separating these two on the basis of the form of the stigma and styles, which are arranged toothbrush-like in Vicia, and bottle brush-like in Lathyrus. 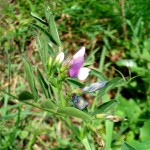 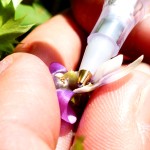 A little further down the road a large Mediterranean Echium (Boraginaceae) was looking splendid and, despite the very pressing need for her sandwich, got the cheerful thumbs up from Ms Higginbotham, also our resident Mediterranean personage.

Eventually and inevitably, the group did reach the cliffs and the sight of the sea brought palpable expressions of joy and delight! Indeed, even more joy and delight than seen when confronted with a new Poaceae.

There followed an al-fresco lecture on the National Vegetation Classification from Wizard Carter explaining the range of  plant communities of sea cliffs and related types. And then abundant opportunities for quadrating ensued in cliff crevice, cliff-grassland, cliff Bluebell and cliff-top scrub vegetation. 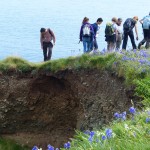 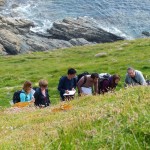 Have an NVC lecture instead!

A rock outcrop in this area offered up decent specimens of the diagnostic crevice (MC1) species Spergularia rupicola (Rock Sea-spurrey) and alongside was experienced our first Sagina alert, indeed a rather blunt Sagina and only shortly mucronate, yielding the very real possibility of  Sagina maritima (Sea Pearlwort). 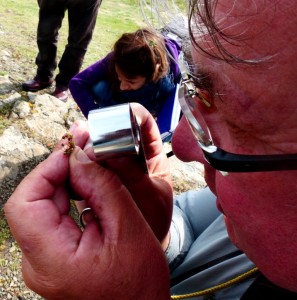 Further on past the Lizard Lighthouse and the conversation took on a decidedly Shakespearean turn:

“to quadrat or not to quadrat, that is the question, whether ‘tis nobler to suffer the species and Domins of a quadrat in the MC5 maritime therophyte community or… or to head to the tea shop pdq for a well-earned cuppa!”

In the end eXtreme botany prevailed (of course!) and a decent 4m x 1m quadrat was done above the path yielding no fewer than 26 species including frequent occurrences of the rare Trifolium incarnatum ssp. molinerii (Long-headed Clover), the nationally scarce Lotus subbiflorus (Hairy Bird’s-foot-trefoil) and the uncommon Trifolium scabrum (Rough Clover) 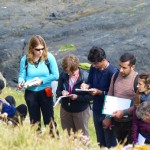 All keen on quadratting – bar one! 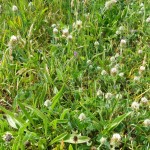 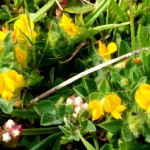 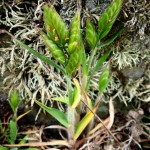 Quadratting done, tea was loudly calling and more careful investigation for some of the other Lizard rarities (such as the remainder of the clover species under the Rev. C.A. Johns wide-brimmed hat for example) was postponed and the group headed off  in the very specific direction of the tea shop reaching record speeds of at least ten times normal botanical pace for the first time this day!

Tea and conversation over and the last botanical leg of the day, the walk back to Lizard village, including a very essential stop in the middle of  the road to check the Erodium maritimum (Sea Stork’s-bill) somewhat breaking the Geraniaceae ID rules by having entire rather than pinnate leaves!

Getting up close and personal with Erodium maritimum

Back to the Botany Express and with hardly a glance towards the trampled car park flora, and post haste back home to Sunnysands and to a well-deserved dinner and then to contemplate and collate the ample results of the long and botanically rewarding day, with Wizard Carter’s list overtopping most others at an impressive 172 species! 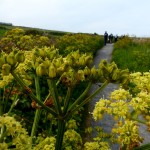 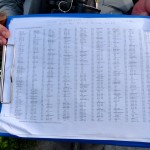 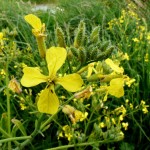 In summary, day 1: An eXtreme botanical day indeed! Lots seen and lots more to come no doubt, but also a need for more practice using the keys on familiar and unfamiliar plants, to keep the eXtreme botanical skills on the up and up.

Good night one and all, and if you have been, thanks for following!