From Arthur Tansley to John Rodwell: Dr M on the NVC

Dr M is teaching his MSc students at University of Reading about Phase 2 surveys and The National Vegetation Classification (NVC).

The NVC was developed at Lancaster University in the 1980s when Dr M was a post-doc researcher there working with Andrew Malloch and John Rodwell (the editor of the NVC) during the writing of the NVC and so it is all rather close to his heart.

There are are a number of different habitat classifications in the UK, they all have different aims, objectives and parameters and so are not strictly comparable one with another:

The UK National Vegetation Classification (NVC) is based on the methods of Continental Phytosociology developed in France and Switzerland in the 1930s by botanists such as Braun-Blanquet (1928) and Tuxen (1937).

But as Professor Mick Crawley has put it (Plant Ecology, Chapter 14, p.479): ‘For a modern approach to the description of plant communities…the five volumes of British Plant Communities (Rodwell 1991-1997), which describe the National Vegetation Classification (NVC) and provides an exemplary mix of history, biology, geology and human influence in the determination of botanical composition.’

The idea of a national vegetation classification can be traced back to the 1970s and Derek Ratcliffe, Director of the statutory conservation agency at the time, the Nature Conservancy, who was concerned about the lack of any comprehensive classification of UK vegetation types.

Then in 1974, the British Ecological Society endorsed plans for project and in 1975 work began under the leadership of Dr John Rodwell and based at the University of Lancaster and with involvement of plant ecologists at the Universities of Cambridge, Exeter and Manchester.

The NVC also draws explicitly on later work such as McVean & Ratcliffe (1962) Plant Communities of the Scottish Highlands and a whole range of monographs on British vegetation including:

In addition to existing published works and data from unpublished PhD theses etc the NVC commissioned new survey data and around 13,000 new samples were collected over 4 seasons between 1975-1980.

The approach to data collection was pragmatic, choosing representative quadrats located in stands (areas) of vegetation judged by eye to be homogenous in species composition and structure.

Quadrats of various standard sizes were used appropriate to the scale of the vegetation (see below) and all vascular plants, bryophytes and macrolichens were recorded and their percentage cover estimated using the ten-point Domin scale (see below).

Sample location, altitude, slope and aspect were noted as were solid and drift geology and soil type together with information on management (burning, grazing mowing etc) and other human impacts. 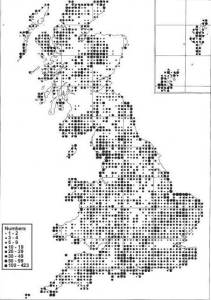 The aim of the NVC was to provide an objective classification based on vegetation data which could be used as a basis for scientific nature conservation.

The quadrat data were analysed using statistical methods such as TWINSPAN (Hill 1979) and sorted into distinct communities and sub-communities based on species composition.

Environmental data collected (e.g. soil data) was used later to aid interpretation of the factors affecting composition of the different communities and sub-communities.

The aim was to provide comprehensive coverage of the country England, Scotland and Wales and later the methods were extended to Northern Ireland (Cooper et al. 1992).

The aim was also not just to focus on rare or interesting vegetation types but to include nearly all natural, semi-natural and artificial habitats excluding only short-terms grassland (arable leys).

To gain support from a wide range of academics and practitioners it was also important that the final classification should be more than a list of communities for mapping and inventory.

It was important for the classification to help understand how vegetation works and how particular communities are related to climate, soil and management factors and how they change from place to place (zonation) and how they change through time (successional dynamics).

It is important to appreciate that the NVC is not set in stone, it is not the last word on the classification of British Vegetation, on the contrary and in the authors own words “a first approximation, essentially reliable, but with some deficiencies in coverage and much unexplained variation.” (Rodwell 2006).

The National Vegetation Classification (NVC) was published as a five-volume series entitled British Plant Communities by Cambridge University Press and appeared between 1991 and 1996.

The NVC volumes classify British vegetation into 286 different plant communities and  each community is given an alphabetical code and number according to the type of vegetation:

The structure of each volume is similar starting with a general introduction to the NVC and with keys to help determine vegetation types from your own quadrat data and then the main part of each volume is a set of community accounts.

Each community account is written with the same format, so once you get used to using the NVC you know exactly where to look for different bits of information:

Well, there is a standard NVC Survey Protocol which you need to follow and this is detailed in the National Vegetation Classification Users’ Handbook by John Rodwell and published by JNCC (2006) and brief details are given below. 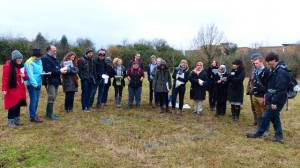 The objective here is to delimit vegetation areas (stands) which are relatively uniform in species composition and structure. It is not quite as esoteric and mysterious as it sounds but it does take good visual skills and practice and experience to achieve.  A key lesson is don’t be hasty! Spend time walking the site to get a feel for the whole range of variation in the vegetation and then delimit areas which seem to be related in terms of species and structure. If in doubt sub-divide areas.

The surveyor chooses ideally a minimum of 5 quadrats from each homogenous stand, the selection is subjective (i.e. not random as in other survey protocols) but avoid discontinuities and anomolous areas e.g. footpaths and avoid the temptation to choose areas because they have unusual species or structure, that defeats the object of being representative!

Dealing with boundaries and ecotones (2a, 2b ad 2c in the diagram below)

Boundaries are where one vegetation type stops and another starts. NVC sampling needs to avoid boundaries where possible because these will not conform to NVC types by definition. In some sites, e.g. in a grassland with uniform management and soils there may be only one vegetation community and so no issue of boundaries.  In other cases there may be more than one community and the boundaries are obvious e.g. a pond in a field. In other cases there may be more than one community but the boundaries between them may be much more diffuse with one type passing almost imperceptibly into another.  In these cases it is necessary first to identify one more or less homogenous vegetation type and then to walk first in one direction and then another direction and work out how and where the changes between types occur. The job then is to sample just the homogenous areas of the main vegetation types and avoid the diffuse boundaries.  If this is impossible then there may be no alternative but to sample a regular grid of quadrats and determine the communities post-hoc from the phytosociological table.

Ecotones are directional sequences of different vegetation types which are usually clearly related to environmental factors like soil or water gradients or gradients of sea spray on a maritime cliff. This is an extreme case of the boundary issue above, except that the direction of variation should be more evident. In this case walking a transect in the direction of the gradient should allow you to determine how and where one vegetation type grades into another. Again if in doubt then sample quadrats from a grid or a number of transects and determine the communities post hoc.

Dealing with mosaics (2d in the diagram above)

Mosaics are where patchworks of different vegetation types are intermingled over an area, often as a result of some kind of underlying environmental patterning.  There can be similar issue to ecotones, although it can be difficult to decide on a sampling strategy if the scale of the mosaic is very fine-grained. It may be necessary to sample entire patches in the mosaic as a quadrat rather than force a square quadrat shape which might include more than one vegetation type.

Selecting size and shape of quadrats

NVC quadrats are usually square but this is based on tradition not necessity, rectangular or circular quadrats are fine too. Where vegetation stands are small then the quadrat can be irregular in shape covering the whole patch.

The following quadrat sizes are standard in NVC survey and result from pragmatic response to the scale of different vegetation types:

Sampling vegetation with a pronounced 3-dimensional structure such as woodland requires a special approach as does sampling linear vegetation features (e.g. hedgerows) and aquatic vegetation and further details are given in Rodwell (2006).

For best practice NVC survey you should record the following features for each quadrat on a standard NVC proforma shown below: site name, date, Ordnance Survey Grid reference (ideally to eight figures), altitude, slope, aspect, sample size, soil type and solid and drift geology. Include any information on management that is evident, e.g. burning, grazing or mowing, coppicing, dredging etc. 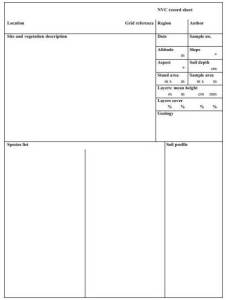 NVC requires a list of all vascular plants rooted in the quadrat plus as well as bryophytes and macro lichens. For woodland sampling separate lists of canopy layer  trees, shrub layer and field layer should be made. Authorities for species names should be given to avoid issue of taxonomic synonymy, current accepted floras are Stace (2010) for vascular plants, Hill et al for Bryophytes and Smith et al for lichens.

Estimate cover of each species using the Domin scale

Plant species abundance in NVC survey is estimated using the Domin Scale which is based on increasing fractions of the quadrat area:

Good question!  But we haven’t collected our data yet so it’s a question for next time! 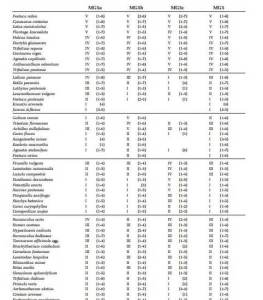 Watch Dr M’s eXtreme botany video on Master Quadrat here, you might not learn much about the NVC and the use quadrats but Dr M is rather proud of it, so go on, humour him, watch it!