Home   Botanical education   Dr M reaching out to the next generation with plants!

Dr M reaching out to the next generation with plants! 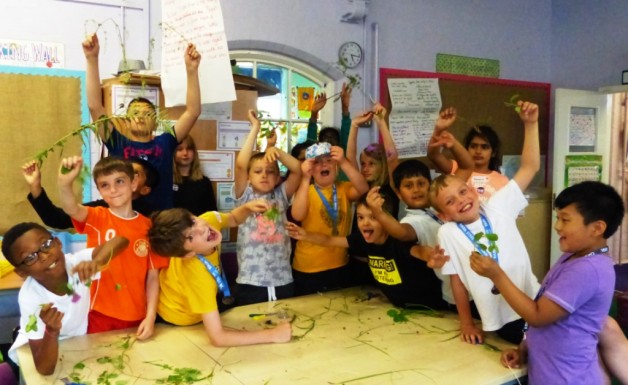 Following their successful visit to the University of Reading campus for Fascination of Plants day 2017, Oxford Road Community School and their teacher Mr Lyford invited Dr M to contribute to the school science club.

The theme was classification and Dr M took in three bin bags of plants gathered from the University campus and invited the pupils to think about how we can group and classify plants.

There are lots of plants in the world (around 400 000 different species) so classification helps us create some order out of this diversity and to better understand the plant world.

The science club class formed three groups and Dr M emptied the plants out and the whole group helped sort the plants into species and we found there were 21 different plant species and the group arranged seven on each of the three tables. 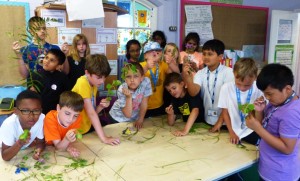 Dr M then asked how can we classify these into groups?

The first suggestion was to group the grasses and there were six different ones and these were put in piles on one of the tables, we called it the grass table.

The remaining plants all had brightly coloured flowers (unlike the grasses) so the next suggestion for grouping the remaining plants was flower colour, so one table was the yellow and orange table and the other was red and purple table.

Then Dr M invited the pupils to sit by their favourite table.  A big group chose the colourful flowers “purple is my favourite colour”, a smaller group favoured “the orderliness of grasses”.

Then it was time to observe, science is all about looking at the world carefully, and Dr M invited the pupils to select a plant and to spend time looking at it using eyes and magnifying glasses and to find something interesting about it. 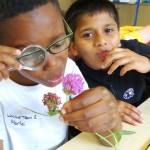 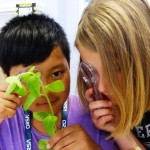 Dr M then witnessed loads of great observing and each pupil had a chance to tell the class what they had found out about their plant.

One pupil looked at a plant with flowers that she said looked like brown broccoli (they did!) and she found you could tear open the shoot and remove the inside as a long intact white thread.  Dr M told the class the plant is called soft rush (Juncus effusus) and in the days before houses had electricity the inside pith of the soft rush was used as a wick in oil lamps!

There were plenty of other fascinating observations, several pupils were very enthused about finding the seeds of yellow rattle (Rhinanthus minor) and love-in the mist (Nigella) in their inflated capsules. Others marvelled at the geometric beauty of the veins in a clover leaf, while the cactus-like buds of fox-and-cubs (Hieracium auranticum) attracted one pupil and another got really up close and personal with the beauty and softness of its plant hairs.

It was not long before the orderly pile of carefully grouped plants was reduced to compost by the eager young scientists looking at what interested them!

Dr M managed to salvage a few plants from the pile for the whole group to look at together. One of these was the zig-zag clover (Trifolium medium) and several pupils delighted in the sweet honey smell of the flowers (some found it too strong!) and others went so far as to enjoy the taste of the sweet nectar when an individual flower was plucked and placed on the tongue.

The second group plant was from the grass table and here the group noticed and admired the tiny flowers and questioned, being so small and with no colourful petals or sweet nectar to attract insects, how are they pollinated? Discussion ensued and it didn’t take the group long to realise wind pollination was the key to this conundrum. The idea of grass pollen floating abundantly on the wind was not wholly appreciated by the several hay-fever sufferers in the group!  They probably felt that Dr M had brought in these confounded Poaceae (grasses) to make them suffer!

Then Dr M dropped his final bombshell and revealed that all the six plants we had carefully grouped on the grass table at the beginning of the session were not all grasses!  Instead there were three quite distinct types of plants – only two of them were true grasses, two others were rushes (including the brown broccoli plant of course!) and the final two were sedges.

Dr M was able to use the old rhyme to help sort these out: “Sedges have edges, rushes are round and grasses have nodes all down to the ground”.

Some time was spent checking the stems of the sedges which were indeed triangular, and the grasses had knobbly knees (nodes) and the rushes were round.

Dr M ended the session with the promise of a chance to check their new knowledge when they come to University of Reading campus in a couple of weeks for Dr M’s big green plant hunt for which there was huge enthusiasm! 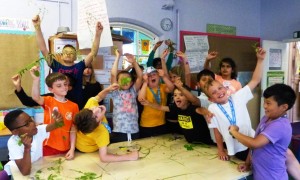 Dr M says: Watch this space for an account of the next of his botanical outreach events!