And with all this recent rain the bryophyte flora has really perked up again for its peak autumn season.

Mosses are of two main kinds: pleurocarps – branched and creeping for the most part, and acrocarps – unbranched and erect.  One of the commonest acrocarps in the lowlands, growing on base rich and calcareous rocks and walls, is Grimmia pulvinata (Grey-cushioned Grimmia).

And as the common name suggests this forms furry grey cushions 1-2 cm high. 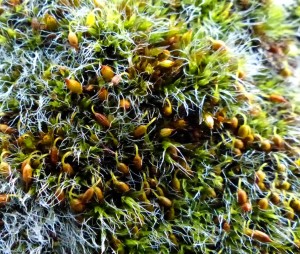 The narrow leaves are about 3-4 mm long (use a lens to see these) and ending in long white hairpoints  (a feature common to the order Grimmiales to which this moss belongs).

The capsules (spore containing organs) are oval and held on stalks (termed the seta) which is initially arched and bent back (see left) but straightening and holding the capsule erect with age (as in the featured image at the top of this post).

Keep your eyes open for more bryophytes there are lots about and they get everywhere!