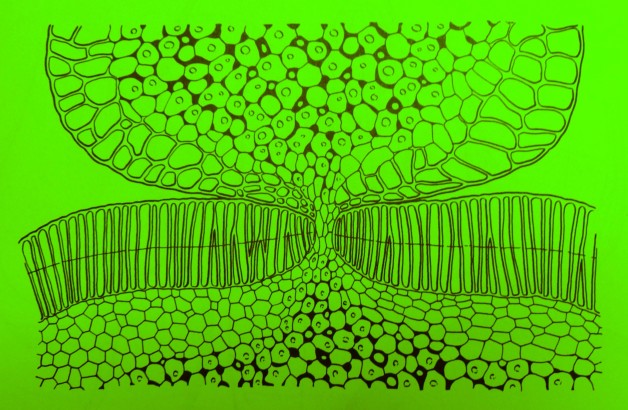 Dr M loves it when this happens! Stumbling upon some writing which leaves him speechless, thinking: “Oh my! What eXtreme creative botanical mind was at work there?”

One such moment occurred recently when Dr M was checking information on fruits and seeds for his World eXclusive botanical party game eXtreme Carpology.

Dr M visited the RNG herbarium and took down from the shelves the two volume magnum opus “The Seeds of Dicotyledons” (1976) by the late Eldred John Henry Corner (1906-1996), erstwhile Professor of Tropical Botany at the University of Cambridge.

OK, undoubtedly precise, but neither botanically spellbinding nor especially gripping!

But something very different occurs on page 162 et seq and one wonders what observation, research finding or happenstance stimulated the eXtreme botanical torrent that follows:

“Leguminosae are one of the great lines of dicotyledonous evolution. They far exceed the idea of an order or family, except within the artificial confines of nomenclature. They have progressed from doubly pinnate leaves and stipules to the simple, from polypetalous multistaminate  multicarpellary and actinomorphic flowers to the sympetalous, the oligostemonous, the unicarpellary, the zygomorphic, the unisexual and the apetalous, and in fruit from the many-seeded arillate legume to one-seeded drupes, nuts, samaras, and achenes.”

OK, so the terminology will likely baffle all but the carpologically conversant (see glossary at the bottom of this post), but Corner communicates with passionate prose, there is even poetry of a kind here!

“They have not achieved the epigynous construction though  most are variously, and even extensively perigynous. Pachycaul forms are scarce and seem confined to the saplings of trees. They have extended through the lowland tropics and the temperate regions with trees, climbers and herbs in greater abundance and variety than any other line of dicotyledons; yet, they have never become epiphytic, parasitic or saprophytic, and very few are aquatic. With such manifestation it is difficult to frame a definition. Genera are placed in alliances but there are intermediates, and the whole is one of the more remarkable concatenations of the plant kingdom. It is so vast that it has still to be explored microscopically, and this vastness, replete with evolutionary side-lines and relict genera, seems to have dismayed writers on the evolution of angiosperms who see, not a mighty contingent, but a standard family with zygomorphic flower, one carpel, and rosaceous or saxigragous parentage.  Yet there are living plants to explain how the diverse zygomorphy of Bauhinia and Vicia has arisen, how the holy Saraca has lost its petals and become secondarily actinomorphic, how Parkia has reverted to the primitiveness of Archidendron, how the bean has gained its hilum, how bats and moths play box and cox with birds and butterflies, how Inocarpus has lost most of its leguminous marks, why Trifolium has dentate leaves, Acacia and Lathyrus have phyllodes, and Bauhinia monandra has one stamen, like an orchid.

The neap-tide of modern botany never uncovers its riches. From arctic circle to tropics, desert to pergola, bacteria to plough, field to mouth, and legend to science, Leguminosae invest our lives, and a feeble backwash seeps through or Universities. We wait that treatise which will quicken the herbarium into that living tree of phylogeny.”

To which Dr  can only reel and wonder, whence that feeble backwash?

At very least there is the seed of an idea for another eXtreme botanical party game here, testing just how many of the numerous botanical terms – e.g. polypetalous, multistaminate, multicarpellary, actinomorphic, sympetalous, oligostemonous, unicarpellary, zygomorphic etc etc – that one can translate into plain English?!

According to one obituary: 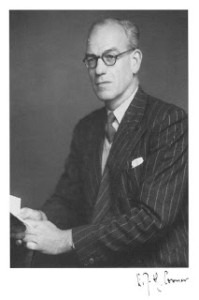 Corner spent the rest of his career as lecturer, as reader (1959) and finally with a personal chair (1966) in tropical botany. He took on the mantle of H. Gilbert Carter, to interpret the plant world to students, using the very rich University Botanic Garden, libraries and herbarium. He was a spellbinding lecturer and ran a memorable practical course in the garden. All botany students of whatever specialisation came to hear him. He made a lifelong impact and attracted to tropical botany some of today’s leading proponents. His lectures showed originality, insight and iconoclasm, as did his writings.

Certainly we can see ample evidence of this originality, insight and iconoclasm in the description of the Leguminosae above!

The featured image at the top of this post is of the anatomy of part of a Bauhinia picta seed and taken from The Seeds of Dicotyledons (Corner 1976).