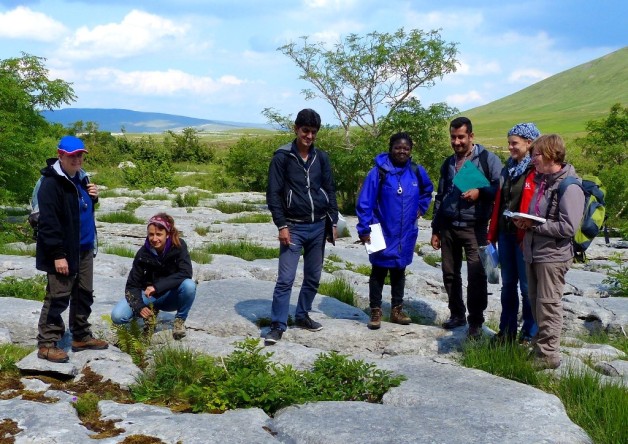 A day in which we witness Dr M’s gryke falls, hairy balls and eXtreme Apiaceae not to mention MalHam’s very own Wars of the Sedges, read on…

The walk in from the Ribblehead road took in calcicolous grassland and, since students had already spent many hours toiling in a quadrat of this kind of vegetation beside Malham Tarn yesterday, for now Dr M restricted activity to revised a few key species, especially the calcicoles (lime-loving) species such as Poterium sanguisorba (Salad Burnet) and Galium sterneri (Limestone Bedstraw) and the grass Helictotrichon pratensis (Meadow Oat-grass).

What was especially interesting was the observation that, just a few metres above the calcicolous grassland, in places where the soil was deep enough to reduce the influence of the underlying limestone, there was a completely contrasting grassland type comprised almost entirely of calcifugous (lime-hating) species.

Students took the opportunity (i.e. were told!) to record another quadrat which included the following species:

After this diversion into calcifugous grassland, and with permission from Natural England already granted, students walked on to the protected and ungrazed Limestone Pavement of Ingleborough NNR  and spent some fine and sunny hours examining the extraordinary limestone landscape with its deep grykes and fascinating mix of grassland, scrub, woodland and mire species in the range of microhabitats found there.

Limestone pavement is an inherently dangerous place with its uneven footfall and deep unforgiving grykes and Students were instructed to take special care.

But, ironically, or maybe predictably, it was Dr M in his keenness to see the grykes from the plants’ point of view and venturing a little too close to one of the wider and deeper of the grykes, lost his grip and tumbled into the gryke.

Students were alerted by his cries, and at first uncertain how to respond, should they push him further into the gryke, thereby gaining a free half day (for test revision of course)? Or should they help him out to live to endure another eXtreme botanical day?

In the end eXtreme botany (or insanity?) prevailed and Dr M was hauled out amidst cries and cheers (jeers?) of encouragement. 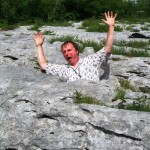 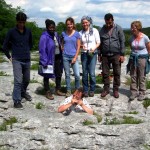 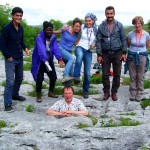 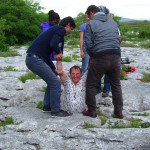 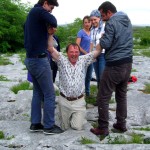 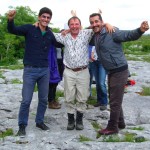 Soon after lunching on the sunshine-drenched pavement another curious incident took place, this time involving students Edwina Higginbotham and Count Ligule. According to eye-witness accounts there was an exchange involving a large dead and crispy stem of Apiaceae brandished by Edwina Higginbotham and cracked and waved in the face of Count Ligule.

To this day no-one is quite sure (i.e. no-one has any clue) what exactly provoked this curious incident, and this despite Edwina’s several attempted explanations begun several times but soon degenerating into fits and tears of hysteria. Probably (certainly) we will never know exactly what happened and why, and we will be none the wiser but probably none the worser for that! This is the inexplicable stuff that field courses are made of! 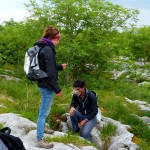 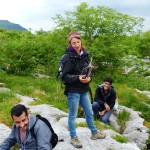 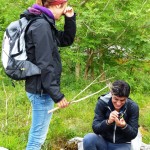 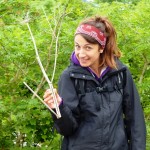 Limestone pavement, at least on this day, clearly provoked numerous incidents of near or downright botanical madness even eXtreme insanity.  This third (turd) incident counting among these. Dr M, seated on the pavement for lunch, espied a rather fine specimen of animal poo not far away which he examined, thinking it perhaps an owl pellet (well Dr M is no zoologist after all!). Examining the contents of said poo more carefully, he discovered conspicuous quantities of hair and bones, no doubt of small mammal origin. 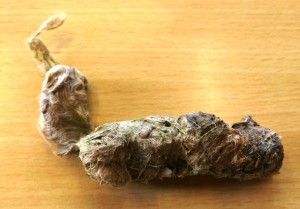 Sharing this coproloid discovery with nearby student Edwina Higginbotham, she at once exclaimed that this was very reminiscent of her cat when it chokes on its own hairy balls. Dr M, aware of Edwina’s origins as broadly overseas and from somewhere within the deepest darkest Spanish Continent, suggested that, whilst he fully comprehended the analogy, her exact expression was somewhat lost in translation, but certainly made Dr M laugh!

For the end of the day we took to the grazed limestone pavement and noted a big contrast here with a smaller number of larger trees in evidence and much less vegetation in and around the grykes due to activities of grazing animals (sheep).

This ungrazed pavement proved very convenient for spotting the rarer ferns which were more conspicuous in the grazed grykes being freer of grasses and other vegetation. Soon we (i.e. Dr M) found Dryopteris submontana (Rigid Buckler-fern) and Gymnocarpium robertianum (Limestone Fern) to add to the list of commoner ferns like Asplenium ruta-muraria (Wall Rue) already found on the ungrazed pavement. 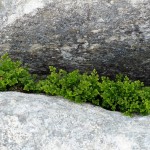 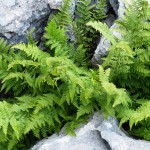 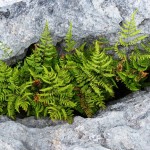 After dinner the class took to more ID’ing in the classroom. Evening work included the identification of the previously unidentified spiky Poaceae from Tarn Fen on day 1. Now this was a very handsome grass about a metre tall and with narrow, oblong panicle of purplish spikelets. 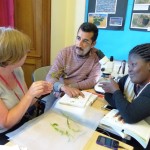 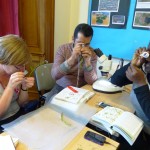 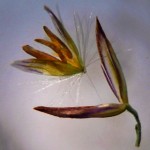 Dr M handed out a plant to each student and they examined their specimen carefully, dissected a spikelet and worked though the key in the Book of Stace.  Soon they noticed that there was just a single floret per spikelet (characteristic of Agrostis and some other genera), there was an awn arising from the back of the lemma (so fitting tribe Avenea), and there was a conspicuous tuft of hairs arising from the base of the floret.

These observations allowed students, with a few slips and trips here and there, toreach the genus Calamagrostis and the rare wetland grass Calamagrostis stricta (Narrow Small-reed) a bit of a speciality in the richer fen vegetation at Malham Tarn.

After this students worked on different plants and the sedge Queen and her colleague Edwina Higginbotham cracked on with some more sedges. Now this went very well and the pair managed to identify Carex appropinquata (Fibrous Tussock-sedge) and Carex diandra (Lesser Tussock-sedge). Similar but different sedges in which the growth form, vegetative characters and utricle shape are quite helpful for making the separation.

Dr M then handed them a further sedge to work on, this time it was Carex disticha (Brown Sedge). And this is where things began to go botanically pear-shaped (or do I mean utricle-shaped?). Anyway it went wrong!

Now you will probably have heard of the Wars of the Roses, fought in the 15th century between the royal houses of York and Lancaster, just down the road from MalHam in fact! But tonight it was definitely the Wars of the Sedges fought this time by the houses of Switzerland and of Spain versus the house of Reading!

It went something like this. The Sedge Queen (house of Switzerland) and Edwina Higginbotham (house of Spain) worked on this sedge methodically using the advanced key in the Book of Stace. But did they get a correct ID? No they didn’t!

In fact Dr M (house of Reading) was puzzled because these two who had worked so well on the previous sedges, were working on Carex disticha (Brown Sedge) but were getting not just slightly wrong, but eXtremely wrong answers, answer from the wrong sub-genus totally!

eXtremely baffled, Dr M asked what was going on here?

In the subsequent discussion, Dr M discovered that had both really taken exception to an early critical couplet in the sedge key.  It’s the couplet that separates sub-genus Carex (sedges with different spikes) from sub-genus Vignea and related sedges (with similar spikes).

This seems clear enough, and will be familiar to anyone who has keyed out a sedge using the Book of Stace and indeed most other of the more advanced keys! But not so to the now irate Sedge Queen and the angry Edwina.

Now, whether this misinterpretation stemmed  from a translation issue (like Dr M’s hairy balls above) – both the Sedge Queen and Edwina being from the abroad regions, or whether it stemmed from scientific difference of opinion, but the two sedge workers were adamant that the sedge they were working on Carex disticha (Brown Sedge)) had different spikes.

Dr M and guest tutor Hermione tried to convince them that no the spike in Carex disticha (Brown Sedge) were similar, but to no avail, at least to start with.

Probably this misunderstanding actually stems from the inflorescence of Carex disticha (Brown Sedge) which is narrowed in the middle sometimes giving the appearance of different spikes, though in realty these are clearly “more or less similar” as the couplet requires.

In the end agreement or at least a botanical truce was achieved. 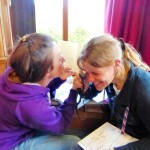 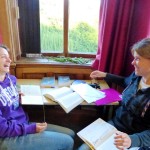 After todays foray into the limestone pavement, the number of sedges new for the field course totalled four:

In addition, the evening ID included the following sedges collected on day 1:

and, lest we forget, the attempted ID of Carex disticha (Brown Sedge) – that well-known sedge with similar spikes and the unwitting catalyst for the MalHam War of the Sedges!

All in all, and eXtreme botanical madness aside, this brought the total number of sedges (Carex species) seen on the MalHam field course to a Cyperaceously replete nineteen! 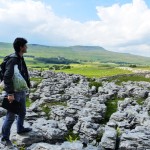 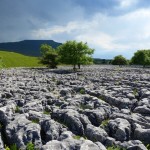 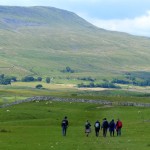 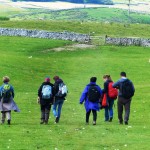 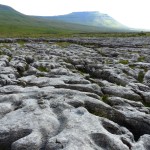