A very large order comprising most of the pleurocarpous mosses with perhaps 4400 species world-wide!

If you have forgotten how to distinguish pleurocarps from acrocarps check here!

In addition to Hypnales, the pleurocarps in Britain include only the Hookeriales – which is a fine order but one that Dr M will deal with in a future post.

The Hypnales are very variable in size and habit and habitat, but generally procumbent and much branched, pinnate or with irregular branches.

The leaves arranged in three main ways in Hypnales:

(1) in many rows spreading on all sides – e.g. Brachythecium;

The field key in the BBS Field Guide (page 50) uses these three types as the basis for separating different pleurocarpous mosses, so these are important characters to recognise

Leaves ovate or lanceolate, entire or serrate, usually with one nerve, sometimes two, sometimes with none.

Leaf cells in the mid-leaf region usually much longer than wide, sometimes with alar cells at the basal angles.

The calyptra is cap-shaped, smooth, on a long seta and more or less incurved or drooping.

The example of Hypnales here are divided into the three types of leaf arrangement:

(1) In many rows spreading on all sides

Brachythecium rutabalum is one of the first  mosses the beginner will find (along with the two others below).  Brachythecium rutabalum is a fairly robust pleurocarp moss (more robust than Kindbergia for example) and is abundant in many habitats such as on rocks, tree stumps and decaying wood as well as in semi-improved grassland. It is irregularly branched with bright green or yellowish shoots (the light shoot tips have been likened to Christmas lights and some find this a useful ID feature!). The leaves can be 2-3 mm long, broadly ovate, with denticulate margin (toothed), with tapering pointed tips and an obvious  nerve which extends just beyond the mid-leaf. Capsules are common and there  is no beak on the lid and the seta (capsule stalk) is red and rough with papillae (use a hand lens). 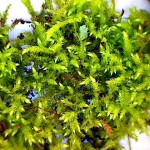 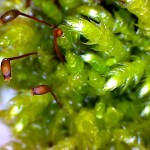 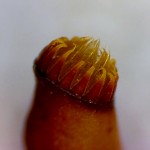 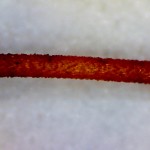 Kindbergia praelonga (synonym: Eurhynchium praelongum) is another very common pleurocarp moss forming deep green patches on shaded banks, tree bases and in grassland. Kindbergia praelonga is quite regularly pinnately branched and feather-like, hence the common name – Common Feather-moss. The main branches are relatively thick with broadly cordate leaves with an obvious nerve, while the secondary branches are more slender with lanceolate leaves, also nerved. The two leaf forms (dimorphic character)  are very characteristic of this species, so check this carefully with the hand lens. 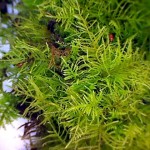 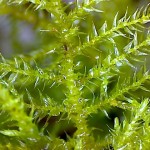 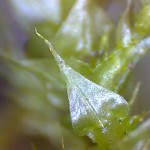 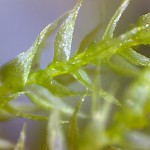 Rhytidiadelphus squarrosus is a common moss of moist grassy places forming patches or scatttered stems amongst the grasses. This is a really characteristic moss owing to the squarrose leaves (i.e. bent back on themselves) giving it a springy appearance and the common name Springy Turf-moss. The red stem is conspicuous and characteristic of the whole genus. The stems are irregularly branched and the leaves have a short double nerve, capsules are rare. 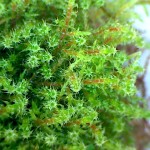 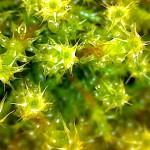 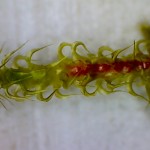 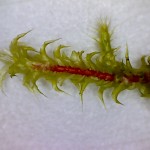 (2) Falcato-secund (leaves curved over to one side)

Hypnum cupressiforme is one of the most abundant and also the most variable British mosses. Prostrate and pinnately branched, this pleurocarpous moss forms mats on wall-tops, rocks and boulders, trees and decaying logs and on the ground. The specific epithet “cupressiforme” refers to the arrangement of the leave which is somewhat reminiscent of Cupressus (Cypress), also rather like rather neatly plaited hair hence the common name (used in the BBS Field Guide) Cypress Plait-moss. The leaves are nerveless (or very shortly nerved or shortly double-nerved but a microscope is needed to see this clearly) and pointed, and recurved and turned downwards in one direction (this arrangement is termed falcato-secund and can be most easily observed at the tips of shoots). Capsules are quite common and are curved-cylindrical with a beaked lid.

There are a number of closely related species which need to be checked for in different habitats, e.g. Hypnum jutlandicum in heathland often under Calluna vulgaris (Heather or Ling), Hypnum andoi in upland woods, Hypnum resupinatum on bark and rock in more base-rich situations and Hypnum lacunosum in chalk grassland 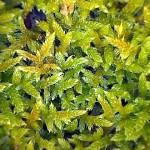 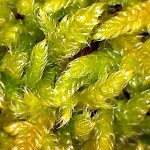 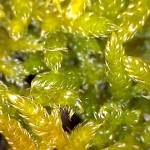 Falcato-secund leaves (curved over in one direction)

(3) Complanate (looking like the shoot has been ironed flat!)

Pseudotaxiphyllum elegans (synonym: Isopterigium elegans) a very common pleurocarpous moss forming prostrate, silky patches in moderate to deep deep shade on a range of acidic substrates. In amongst the flattened (complanate) shoots are slender, little-branched secondary shoots. The leaves are almost nerveless, narrowly ovate and tapering to a fine point.  Capsules are rare. There are a number of other com;ate moss genera to look out for, e.g. Plagiothecium and Neckera. 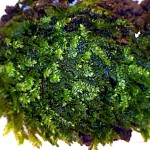 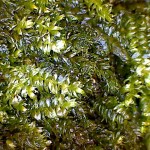 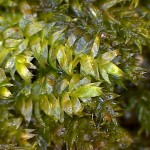 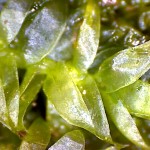