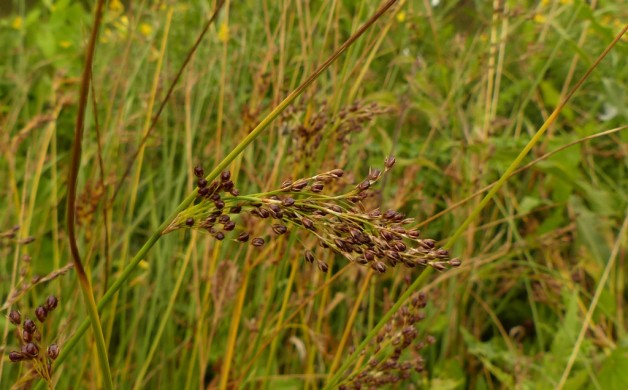 Juncaceae is the rush family, in Britain most commonly represented by Juncus (True Rushes) and Luzula (Wood Rushes). The common name “Rush” has been used for many unrelated plants of wet places with stiff, upright stems or leaves, such as  Sweet Rush (Acorus, Acoraceae), Flowering Rush (Butomus), Scouring Rush (Equisetum, Equisetaceae the Horsetails!) and Bullrush (Typha spp., Typhaceae) also the name Bullrush has been used to describe a number of different species in the sedge family (Cyperaceae) such as Bulboschoenus, Cyperus, Scirpus and Schoenoplectus.

The Juncaceae in brief:

Superficially Rushes resemble grasses but if in doubt check the flowers with a hand lens, in Juncus and Luzula the flowers are small but there is a distinct perianth of 3+3 tepals, whereas in grasses (and sedges for that matter) the flowers are much reduced with no obvious perianth.

Example of the Juncaceae: 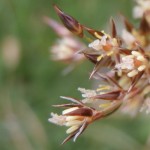 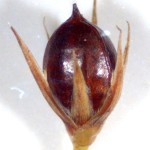 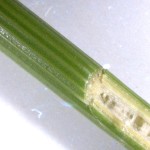 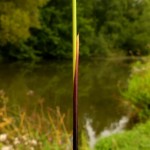 Juncus inflexus is a stiff, erect rush forming tussocks in grassland, heathland or waters edge, the glaucous stems (which is often referred to as a leaf but is actually a stem) are round in section (unifacial), with a small number of very obvious ribs and with the true leaves reduced to basal sheathing scales, the inflorescence is a branched panicle borne laterally from the stem.

The other two common tussock  forming rushes with lateral inflorescences are Soft Rush (J. effusus) and Compact Rush (J. conglomeratus).  Both of these have more compact inflorescences, while Compact Rush is dull green and has many fine ribs, obvious to the touch (but less so than Hard Rush) and Soft Rush is bright, shiny green and has many many but very fine ribs (not obvious to the touch).