I am… Alan Elliott, a final year PhD researcher at the University of Edinburgh and the Royal Botanic Garden Edinburgh working on a project looking the dynamics of speciation in the Himalaya.

I got into botany… by accident. I left school and went to the University of Abertay to study Computer Games Technology. I gave it up after three and a half years because it was becoming all consuming. I had no work life balance as a student and realised that there would be no hope of one while working in the industry.

I worked in a Garden Centre for a wee while to save some money so I could go on a jolly to New Zealand. I was massively impressed with their botanic gardens and being out and how “alien” the flora of New Zealand was to me. When I got back to Scotland I started studying for a National Certificate in Horticulture at Angus College, then went on to do an HNC in Horticulture at Elmwood College before moving on to Edinburgh to study an HND in Horticulture with Plantsmanship at the Royal Botanic Garden Edinburgh and Scottish Agricultural College.

I studied botany… through the Horticulture with Plantsmanship degree course at the Royal Botanic Garden Edinburgh and Scottish Agricultural College (now Scottish Rural University Colleges). There wasn’t anything specifically called “Botany” but it was there seamlessly throughout the various modules that were based at RBGE.

I have worked with plants… as a student at the National Trust for Scotland’s Branklyn Garden in Perth; I did student placements at RBGE digitally mapping the Living Collection. After I graduated I was lucky to get a job in the herbarium at RBGE for two years as part of the team working to digitise the Type specimens held in the collection. I also had a short contract identifying wild collected plant species growing in the Living Collection at RBGE that were unnamed. I then secured a BBSRC scholarship to start a PhD based at RBGE through the University of Edinburgh. 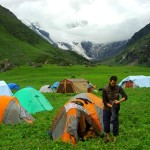 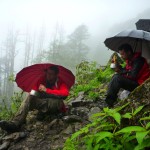 My research/interest area… Is very much the Himalaya. I think my Himalayan fascination probably started because of Michael Palin but then maybe Tin Tin had a hand in that too. I feel very lucky to have already done fieldwork in Bhutan and Nepal. I’m about to head off again to Nepal for another month in the mountains.

My PhD project is studying the role of the mountain building events that created the Himalaya and its influence on the evolution on plants that grow there. This is done using dated molecular phylogenies and GIS techniques. The project feeds into the wider Flora of Nepal project so I am also involved in a bit of taxonomy. My project has generated the taxonomic account of Clematis for the Flora.

I am also more generally I’m interested alpine plants, their survival strategies and abilities to survive in such harsh conditions is a source of endless fascination. Also I enjoy aspects of historical botany and the Scots who were part of it which comes from being at RBGE and its seeming endless botanical history.

The biggest challenge for botany today… has to be getting people to reconnect with plants. There is a complete disconnect between most people and nature. Also botany is severely undervalued as a disciple you only have to look comments from the government and lobbyists who see it as a “hobby” with no commercial worth – people who clearly suffer from that disconnect! 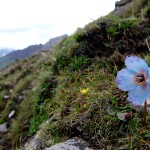 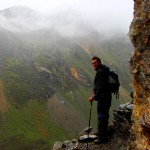 Field work in Bhutan above Tso-Phu 2009

My favourite plant to (admire/eat/use… ) Difficult! I do love Meconopsis, the Himalayan poppies. They are such a fascinating group, amazing plants to grow, their genetic story is very much linked to the evolution of the Himalaya and their cultural significance in the Himalaya, Tibet and SW China is equally as interesting.  I have been and still am on occasion referred to as “Meconopsis Boy” because I bang on about them so much.

I also get excited about alpine plants; I enjoy the challenge of cultivating them and am a member of the Scottish Rock Garden Club and the Alpine Garden Society. Both are great amateur botanical horticulture societies with a vast depth of knowledge in their memberships. I also enjoy growing veggies in the garden at home including landrace crops like Bere Barley from Orkney and Shetland Kale.

My botanical superhero… Probably David Don. He like me was from the small town of Forfar in Angus, Scotland. he was born at the beginning of the 1800s and went on to write Prodromus Florae Nepalensis, the first Flora of Nepal in 1825. He went on to become the librarian to the Linnean Society of London and then the 1st Professor of Botany at King’s College London. Not bad for a lad from a wee town.

I also admire plant hunters who spent months or years at a time out in the Himalaya, Tibet and SW China looking for plants; the likes of Roland Cooper, the collecting duo George Sherriff and Frank Ludlow and, if you have anything to do with RBGE, the ubiquitous George Forrest who all enriched botanical science as much as they did UK horticulture.

http://stories.rbge.org.uk/archives/author/aelliott – I post stories about my PhD and some other odd and interesting things I’m involved with that crop up at RBGE. Including the current Nepalese fieldwork which is about to begin.

www.floraofnepal.org – The Flora of Nepal projects portal. All taxonomic accounts, field records, herbarium records and images are available here. It is continually updated as more work is carried out as part of the project. It really is a great resource.