Home   Books   Lock up your daughters! eXtreme pornobotany is here!

Lock up your daughters! eXtreme pornobotany is here!

Erasmus Darwin was one of the first to revel in the sexuality of plants in his magnum opus “The Loves of the Plants” which was a popular rendering of Linnaeus’ works in English.

Written in highly sexualized language, it  can be described as a catalogue of the sex lives of plants, and was first published anonymously (the equivalent of the euphemistic “plain wrapper”) in 1789.

In 1791, “The Loves of the Plants” was republished as the second volume of “The Botanic Garden“.

Jenny Uglow, in her treatise on the Erasmus Darwin and his colleagues, “The Lunar Men“, illuminates the subject most vividly, even explicitly:

In his Systema Naturae he divided them into classes by the number of “male genitals”, the stamens (monandria, one stamen; diandria, two stamens), and then into orders by their pistils, the female “genitals”: the supporting structure, the calyx, became the “nuptial bed”.

This meant, of course, that some flowers had far more than a single male – and the sexual naming went further, with some structures compared to labia minora and majora, let alone a whole class of flowers named Clitoria.

There was no escaping the link between Linnaean botany and sex.

His system was as accessible to schoolgirls as to scholars.

And since botany was an accepted feminine subject, more prudish translators hunted feverishly for bland and inoffensive English terms to displace the sexy Linnaean language, much to the scoffing of Erasmus Darwin.

But Dr M says, please let’s not uninvent sex for the sake of plants, the plain truth is that plants have sex, and you don’t need a plain brown wrapper or the proverbial Private Shop to view it in all it’s glory!

So let’s not give plants a PG certificate, let alone an 18 certificate, and let’s not beat about the botanical bush but proclaim the glorious sexual activities of the plants with an appropriately clear, uncensored and uncensorious terminology!

This all being said, imagine then Dr M’s joy when The Poetry Society’s National Poetry Prize 2013 was announced, and bestowed upon Linda France for her poem “Bernard and Cerinthe” all about the surprising and voluptuous eroticism of this purple garden plant:

On what inspired the poem, Linda France has said: 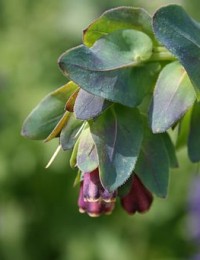 “I remember very particularly the day I wrote this poem, actually. I went to visit a friend of mine who has the most beautiful garden. It was the end of August and there was a plant I’d never seen before: Cerinthe major ‘Purpurascens’, and I was just astonished by it. It’s a very intense blue and the leaves are a silvery green… they’re quite thick, almost waxy, fleshy. That’s one of the things I’m drawn to about plants, they express this tremendous “Otherness”, but they just stay there and let you respond to them, unlike a bird or animal that disappears. A plant remains for you to give your attention to. I love that. I got absorbed in this flower and my sense was that it was very sexy, as many of them are. Cerinthe conceals and reveals at the same time, it has a flirtatiousness about it that’s very seductive. I don’t know how Bernard came into the story, but faced with this out-and-out flirt of a plant, he doesn’t know what to do. So that’s how it happened, really. Obviously it didn’t all come fully formed, but it arose from looking at the flower.”

So, throw wide the doors of the Private Botanical Shop and strip off the plain brown wrapper and enjoy:

If a flower is always a velvet curtain
onto some peepshow he never opens,

it’s a shock to find himself, sheltering
from the storm in a greenhouse,

seduced by a leaf blushing blue
at the tips, begging to be stroked.

He’s caught in the unfamiliar ruffle
of knickerbockers or petticoat, a scent

of terror, vanilla musk. If he were
not himself, he’d let his trembling lips

articulate the malleability of wax;
the bruise of bracts, petals, purple

washed up off Curieuse or Silhouette.
But being Bernard, he’s dumbstruck,

a buffoon in front of a saloon honey
high-kicking the can-can. Can’t-can’t.

He attempts to cool himself, thinking
about seahorses, Hippocampus erectus,

listening to the rain refusing to stop,
soft against the steamed-up glass.

Read: more about her work at Botanical: Poetry and Plants.

Up the Cerinthe: Read about the taxonomic and nomenclatural howlers surrounding the naming of the purple plant central to the poem at Plant Curator

Coco de Mer: kindly loaned by RNG Herbarium University of Reading (though not sure they wuold have done if they had known what I wanted it for).