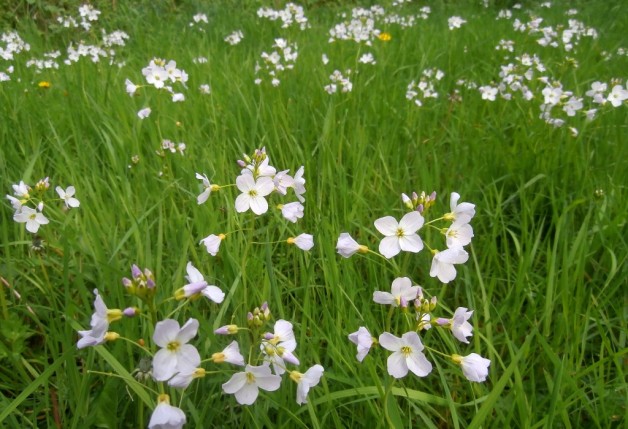 According to Ian Skelly on BBC Radio 3, Dr M’s radio channel of choice, the 15th of April seems to be a reliable date for hearing the first cuckoo of spring (in Dorset at least!), though not many get to actually see these extraordinary and rather elusive birds.

Well for Dr M, the first and most beautiful cuckoo is a botanical cuckoo of course, Cardamine pratensis (Cuckoo Flower). 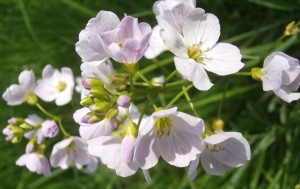 Known also as Milk Maids due to the skirt-like cupping of the creamy flowers as fresh, pure, clean and innocent as any milk maid!

So get out and get up close and personal with these Milk Maids, especially satisfying  in the early morning or evening light when her complexion is at its best!

And while your at it, don’t forget your eXtreme botany and check out her Brassicaceous characters!

Richard Mabey, in his Flora Britannica, devotes a nice few lines to these Milk Maids:

The plant is widespread in damp grassland roadside and ditches and river banks. The flowers vary in colour from pale pink to mauve and are slightly cupped or frocked. Though smock was a once less than complimentary slang for women, on a par with nice bit of skirt, and there may be allusions in the name to what went on in springtime in the meadows with or without a milkmaid or two! So you see dear reader, scratch things botanical and pornobotany is never far beneath the surface!

In some areas the flowers can be so dense as to colour the whole ground but the species has suffered from the widespread drainage and agricultural “improvement” that so beset the English (and much other) countryside in the latter half of last century.

The name cuckoo flower, at least at a local level, is not restricted to this species, there are many and in Cardamine pratensis the coincidence of flowers with the arrival of the cuckoo back from its overwintering grounds in Africa, is certainly no better (but no worse) than for many other spring time flowers.

In fact in many parts of lowland southern England at least, its first flowering long pre-dates that of the cuckoo, but interestingly, as you travel north (at least according to the data in Mabey’s volume) the coincidence gets better!