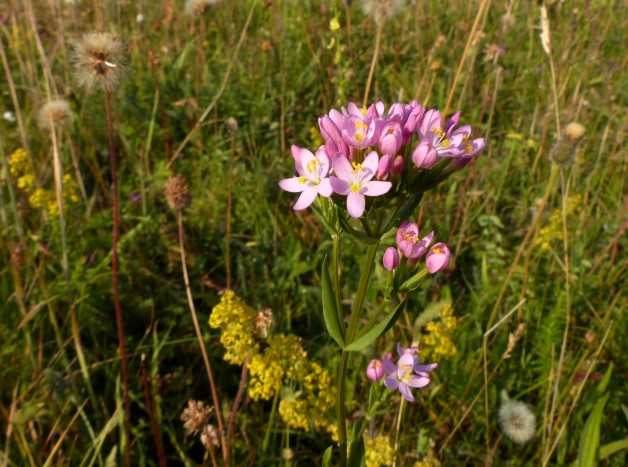 The Gentian family has an air of the exotic about it, all those lovely deep blue arctic alpines seen on holiday in the Alps! Gentianeaceae are quite easily recognised by their opposite, entire and glabrous leaves, 4-5 petals (famously blue of course in Gentiana, but other genera are white, yellow or pink) with the petals fused into a corolla tube with 4-5 stamens borne on the corolla tube itself and with the fruit a capsule dehiscing into 2 valves each with many seeds.

In Britain we have Gentians and one of the biggest and rarest grows in chalk grassland on the Aston Rowant National Nature Reserve in the Chiltern Hills.  Dr M visited the site in mid-July in search of the rare Chiltern Gentian (Gentianella germanica).  He found it but not yet flowering,  so a return visit in August is on the cards! But the visit was far from a disappointment, there were plenty of other flowers to be seen including two other members of the Gentianaceae: Blackstonia perfoliata (Yellow Wort) and Centaurium erythraea (Common Centaury). 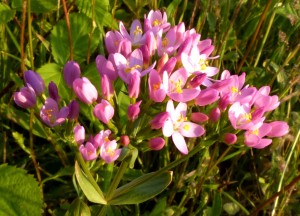 In Centaurium erythraea (Common Centaury) the flowers are unashamedly pink and in a rather dense, branched inflorescence called a dichasial cyme.  This is the botanical term for an inflorescence in which the first flower opens and subsequent flowers develop on axillary branches on both sides (hence dichasial) forming a more or less symmetrical inflorescence.

In common with many other Gentianaceae, Centaurium erythraea is biennial this means that its life cycle is completed over two years (in contrast to annual (1 year) or perennnial (many years) life cycles).  The tiny seeds are dispersed from the capsules in the autumn and those that germinate develop into a rosette which  (if it is lucky and does not die prematurely e.g. from drought) overwinters and in the second year develops a flowering stem and sets seed, after which the plant dies.  Persistence at a site is therefore dependent on successful regeneration from seeds and this plant is commonly found in grassy, open vegetation types on well drained soils like chalk grassland and sand dunes where there are plenty of small gaps in the turf for successful seedling regeneration.

Mycorrhizal associations are also common in Gentianaceae. This is a fascinating and ancient evolutionary adaptation and an intimate relationship between specialised fungal hyphae and the plant roots in the soil.  This is a true symbiosis in which both partners in the association benefit. The fungus benefits by obtaining sugars from the plant which “leak” out of the roots (fungi are saprophytic which means they digest sugars externally (using enzymes) and they cannot produce their own sugars (green plants can of course using the amazing process of photosynthesis). The plant (in this case the Centaury) benefits from the presence of the fungus in its roots by enhanced uptake of water and phosphorus, this helps the plant survive in periodically dry habitats like chalk grassland and sand dunes.

Common Centaury – a common plant with an uncommonly fascinating story to tell!