It’s bluebell time, get thee to a bluebell wood!

It’s bluebell time and there is nothing quite like the heady scent and radiant sky-blue vistas of a British bluebell wood in springtime.

The UK plant charity Plantlife is currently running a competition to choose the Nation’s Favourite Wildflower.  Britain is home to many beautiful wildflowers so there are plenty to choose from but it’s probably no surprise that so far, the number 1 position for England is the bluebell!

Plantlife’s competition runs until May so you still have a chance to vote in the Nation’s most important (botanical) election!

Britain is home to at least 50% of the world’s Bluebells (Hyacinthoides non-scripta) so definitely the place to enjoy the real bluebell experience!

If you have never seen it before, and even if you have, don’t miss out, just go get thee to a bluebell wood near you – while you have the chance!

If you live near Reading and are not sure where to go Dr M recommends Moor Copse National Nature Reserve.

But strolling through your favourite bluebell wood can you be sure all is what it seems?

There are several different types of bluebell in the UK.

There is also a Spanish Bluebell, Hyacinthoides hispanica, grown in gardens and has become naturalised in the countryside e.g. when garden rubbish is dumped there.  (BSBI map here).

Finally, The Spanish Bluebell can crossbreed with the Native Bluebell to create a fertile hybrid, Hyacinthoides x massartiana, which was first recorded in 1963 and is now widely naturalised and much more common in the countryside than its Spanish parent.  (BSBI map here).

So how to tell the Native Bluebell from the imposters? 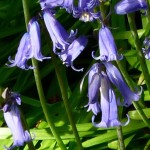 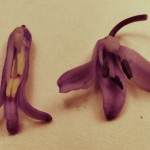 It is not always easy, but a good character is the colour of the young anthers and pollen, these are a cream colour in the Native Bluebell and blue in the Spanish Bluebell and in the hybrid (where there may also be a combination of cream and blue).

You need to make sure you check the young anthers because once the pollen is ripe the colour difference can be less obvious.  The upper flowers of a raceme will be the youngest and these are the ones to check.

Also make sure you check the blue flowers; white and even pink types can occur and these will all have cream anthers, but these flower colour variants are less common than the blue, and there will be blue flowers of the same species nearby so check these.

Other differences between the two are as follows:

The hybrids between these two (Hyacinthoides x massartiana) are very common, with a whole range of intermediate characters, so the hybrid can look like a Spanish Bluebell or like  the Native Bluebell or anything in between! The hybrids are often abundant in gardens and in woods near to urban areas.

Sources and further information on Bluebells: