Home   Books   Dr M meets a great 18th century polymath and botanist, but who is he?

Dr M meets a great 18th century polymath and botanist, but who is he? 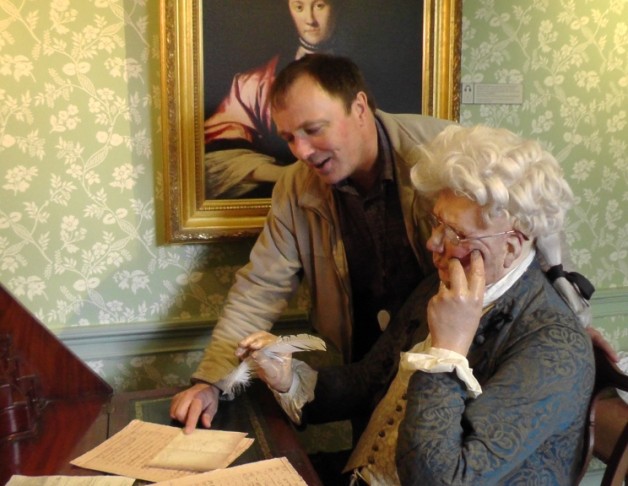 During the 71 years of my highly productive lifetime I:

Sadly, they don’t make them quite like me anymore, so who am I?

So who is this 18th century botanist and all round polymath?

Maybe you guessed Darwin? And you would be correct, but not the most famous Darwin though this one deserves to  be way more remembered and famous than he is!

Say the name Darwin and you immediately think of Charles Darwin. But Charles’s grandfather Erasmus was an even more remarkable figure, even laying some of the ground for his more famous descendant’s work on the origins and evolutionary development of life.

NB the following account is collated from the sources given below. 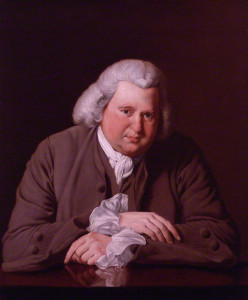 Born at Elston Hall, near Newark, Nottinghamshire, on 12th December 1731, Erasmus Darwin was the youngest of four sons who became one of the foremost physicians of his time.

Erasmus Darwin was one of the greatest polymaths of the 18th Century. It has been said that no one since has ever rivalled him for achievements in such a wide range of fields.

With interests extending from mechanics to fungi, Erasmus Darwin was a speculative thinker of real daring – a crucial link between the eighteenth-century Enlightenment and the 19th Century’s increasing embrace of industrial technology.

Erasmus Darwin, who studied both classics and mathematics at Cambridge, was never content to confine himself to a single discipline.

Among Darwin’s many talents was his extraordinary scientific insight in medicine, physics, chemistry, geology, meteorology and human biology, zoology and botany.

Erasmus Darwin came up with a coherent theory of evolution a full 70 years before his grandson Charles turned his mind to it.

Erasmus Darwin’s preoccupation with botany was probably prompted by William Withering’s work around 1775 in applying the new Linnaean classification to British plants.

Erasmus cultivated an ornamental garden a mile from his house, which served as a test-bed for his theories about plant life.

Darwin formed the Lichfield Botanical Society to translate the works of the Swedish botanist Carolus Linnaeus from Latin into English. This took seven years.

The result was two publications: A System of Vegetables between 1783 and 1785, and The Families of Plants in 1787.

In these volumes, Darwin coined many of the English names of plants that we use today.

Towards the end of his life he gained recognition as the leading English poet of his day.

He wrote The Loves of the Plants which was a popular rendering of Linnaeus’ works. Written in highly sexualized language, it  can be described as a catalogue of the sex lives of plants, and first published anonymously in 1789.

In 1791, The Loves of the Plants was republished as the second volume of The Botanic Garden. 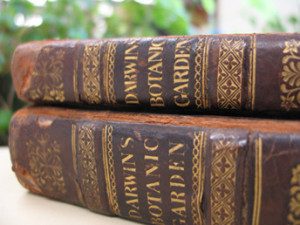 In an essay entitled “Sexing the plants: why we should revive the poetry of Erasmus Darwin” (The Guardian 2002) Jenny Uglow puts it thus:

“The Swedish botanist Carl Linnaeus had revolutionised plant taxonomy. In his Systema Naturae he divided them into classes by the number of “male genitals”, the stamens (monandria, one stamen; diandria, two stamens), and then into orders by their pistils, the female “genitals”: the supporting structure, the calyx, became the “nuptial bed”. This meant, of course, that some flowers had far more than a single male – and the sexual naming went further, with some structures compared to labia minora and majora, let alone a whole class of flowers named Clitoria. There was no escaping the link between Linnaean botany and sex. His system was as accessible to schoolgirls as to scholars – and since botany was an accepted feminine subject, worried translators like Withering hunted feverishly for inoffensive English terms for the sexy Linnaean language, much to the scoffing of Darwin.”

Now very much overshadowed by his more famous grandson, Charles Darwin’s grandfather Erasmus, deserves recognition for his many-fold qualities and achievements; as a highly-regarded physician, a critically-acclaimed poet, an ahead-of-his-time inventor and, last but by no means least, a dedicated, pioneering eXtreme botanist!

“ Hence on green leaves the sexual Pleasures dwell,
And Loves and Beauties crowd the blossom’s bell:
The wakeful Anther in his silken bed
O’er the pleased Stigma bows his waxen head;
With meeting lips and mingling smiles they sup
Ambrosial dewdrops from the nectar’d cup;
Or buoy’d in air the plumy Lover springs,
And seeks his panting Bride on Hymen-wings.
The Stamen-males, with appetencies just,
Produce a formative prolific dust;
With apt propensities, the Styles recluse
Secrete a formative prolific juice.
These in the Pericarp erewhile arrive,
Rush to each other, and embrace alive.
Form’d by new powers, progressive parts succeed,
Join in one whole, and swell into a seed.”

Check out more extracts from his extraordinary works here.

Featured image from the volume: The Loves of the Plants

Portrait of Erasmus Darwin and information at Wikipedia