Guest blog: Mosses, Mosses, everywhere, is that Sphagnum? You think?!

Dr M continues his occasional series of guest blog posts with a glimpse into the wonderful world of the bog mosses (Sphagnum species) by Charlie Campbell.  As you read this, Charlie is travelling north to bog moss capital Sweden, to really indulge his passion through PhD research in Sphagnum ecology!

Hello I’m Charlie Cambell and I first met Dr M a few years ago when I was working as an ecological consultant and then subsequently as one of his students on the University of Reading MSc Plant Diversity. I am particularly fond of Sphagnum!

Now, there is a tendency, when first introduced to mosses, to assume that every moss is Sphagnum.  Whilst the genus undoubtedly deserves its celebrity status, your average day to day moss is unlikely to be Sphagnum.

Sphagnum (commonly known as the bog mosses) is a genus of around 120 species mostly occurring in wetlands in the boreo-temperate climates of the northern hemisphere. Sphagnum dominated ecosystems cover 3% of the land surface of the planet (between 3.8 and 4.1 million km2).

By the way, there is probably more global carbon stored in Sphagnum and the subsequent peat deposits than any other ecosystem so Sphagnum is pretty central to global climate regulation. 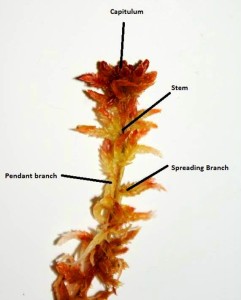 So what does Sphagnum look like?  Most plants, be they vascular or non-vascular (NB lichens are NOT plants), have a root or rhizoid system tying them to the substrate.  Sphagnum does not.  Like all bryophytes it is poikilohydrous – which means it gets its water from the environment.

Sphagnum species come in a range of colours, sizes and shapes: from the dark reds of S.rubellum and S.capillifolium through the greens of S.fallax and S.denticulatum to the ochres of S.papillosum. 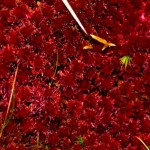 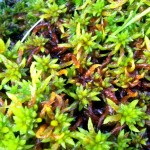 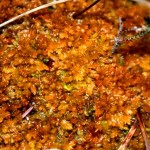 Should you be lucky enough to find Sphagnum you will notice that the plant is only a few 10s of cms long and not metres and metres.  This is because Sphagnum plants grow in such close proximity one to another that light can only penetrate a few centimetres into a Sphagnum carpet and below this depth the lower parts of the plant die and begin to break down to form peat.

There are a number of books and guides to help in Sphagnum identification some of which are free on the internet:

So remember: If you go down to the bog today, why not take a Sphagnum Guide?

Dr M wishes Charlie all the Sphagnaceous best for his future research and life in Sweden!