Ethnobotanist on a rope: eXtreme Malagasy orchidology for Boxing day! 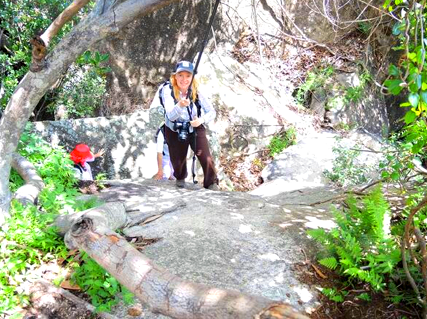 “Madagascar has plenty of snakes and we did see a large one around those rocks. In general most people don’t want to be bitten by snakes, but the Malagasy snakes are not as alarming as some; they are not deadly venomous like the kraits of Asia.

Travelling after dark on the roads in Madagascar is not safe for a few reasons including the potholes that mean people drive on whichever side of the road is not too bad. But our Malagasy guides referred to the area we explored that day as ‘bandit country’.

There is sapphire and gold mining accompanied by gun ownership, and taking zebu from other people was the way to increase the size of your own herd. So after scrambling around the rocks and having some lunch we were racing the sunset to get to the place we were staying before it was dark.

I would emphasise that Madagascar has amazing landscapes that contain extreme conditions. I am impressed that people manage to live in those landscapes, and that they can still expect kindness from strangers.

As we neared the end of our journey that day a herder asked if we had any spare water. Of course our Malagasy guides responded by giving the herder water in a bottle to take with him on his journey.

Our journeys in Madagascar were facilitated by luxuries such as having a mechanic travelling with us in case our bus needed fixing, mosquito nets and storm proof buildings, in fact the endless trappings of our relative wealth.

I was on an orchid orientated trip, but one of the highlights for me was getting to explore a piece of rain forest with a local guide who showed me different plants that he had used as medicines for example to treat malaria, when his hand swelled from a spider bite etc.

I have been to Madagascar before, and once again I found it a magnificent and humbling place to visit. Both because of its immense beauty, and because of how tough it is in some areas for people live – yet they do.” 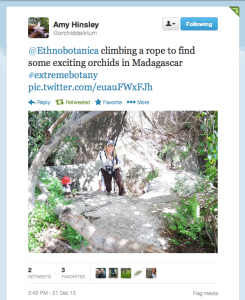