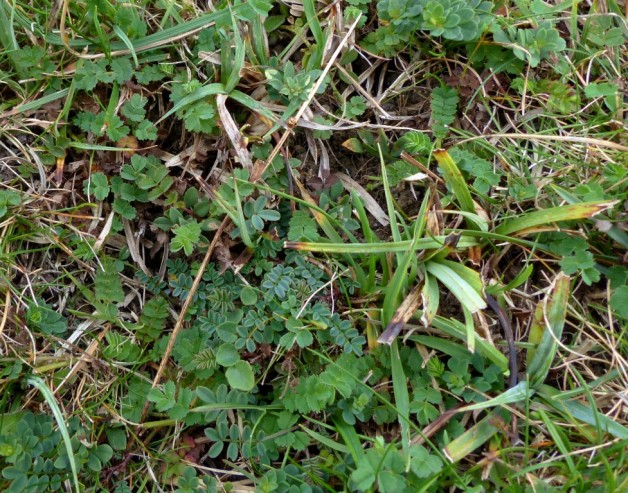 If you arrived here and have not completed Dr M’s Maiden Castle mini-quiz and you would like to, then check it out here! and then the answers here!

If you have, well, with Part 1, the easy bit, out of the way, here’s the real eXtreme botany bit: vegetative plant ID and in chalk grassland – one of the most species-rich communities in Britain – to boot!

Indeed, chalk grassland is famed for it’s species diversity and is one of the most species-rich vegetation types in Britain, and indeed the World too, if we measure species richness as the number of species per small quadrat (so-called  alpha diversity). 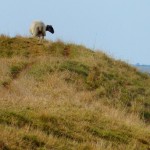 By-the-way, if you are interested in the question “which is the most species rich vegetation in the world?” check here.

Incidentally, one of the contenders is the wooded meadows of Estonia where no fewer than 72 vascular plant species were counted in a single 1m x 1m quadrat recently. Watch this space for a post from Estonia’s wooded meadows on Dr M’s recent eXtreme botany European tour!

Well, back to chalk grassland, and in this tiny fragment of chalk grassland vegetation illustrated, about 20 cm across (8 inches), on the steep south-facing slope to the ramparts of the iron-age fort at Maiden Castle, Dr M found ten different vascular plant species, while an eagle-eyed botanist on Twitter (@botanicalmartin) found one more, making eleven in total, not bad for such a little patch!

In terms of plant families, the eleven are one sedge (Cyperaceae), five grasses (Poaceae), two Fabaceae, one Asteraceae, one Rosaceae and one Campanulaceae.

The image below indicates plants of the eleven species with 2-letter codes referred to below (click on the image for more detail): 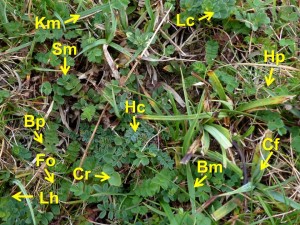 “Sedges have edges” so they say, this means that the inflorescence stem is usually triangular in section, i.e. with edges.

We don’t have flowers here, however we can still tell sedges have edges because the leaves are arranged in three ranks, i.e. with angles of ca. 120 degrees between adjacent leaves). This is very clear in the picture and there are several shoots of this sedge visible.

Using this character it should be fairly easy to recognise sedges in the field, but now we need to know which sedge!.

The colour of the leaves is clear, they are not bright green, but rather they are more blue- or grey-green (especially the young leaves), which botanists, in their infinite wisdom, call glaucous.

There are several glaucous leaved sedges of this size in Britain (this is a medium-sized sedge) but the commonest in chalk grassland is Carex flacca (Cf: Carnation Grass – sorry about the confusing vernacular name but that is why latin names are the best!).

With grasses it’s easy to spot the family (so long as you can rule out Cyperaceae (Sedges: leaves in 3-ranks) and Juncaceae (Rushes: usually with uni-facial leaves, i.e. round in section).

Then it gets a lot more tricky because, without flowers, there are only leaf characters to go on and, surely, I hear you say, all grasses have long, thin, green leaves, end of? There can be nowhere further to go ID wise?

Well even beginning eXtreme botanists know that nothing could be further from the truth!

Leaf dimensions, colour, form, hairiness are all characters which help ID grasses in the vegetative state.

So what of the five species here?

Festuca ovina (Fo: Sheep’s Fescue) – a small to medium sized grass, usually tufted and the leaves are very narrow, usually 1 mm or so wide, bristle-like, and often rolled up tightly so they appear even narrower and even more bristle-like.

In chalk grassland leaves as narrow as this will almost certainly be Festuca and, although the larger species F.rubra (Red Fescue) can occur, it is usually in taller, rough grassland. In short turf such as here, it is usually F.ovina.

There are sheath characters which separate these two species, but for the moment suffice to say F.ovina is tufted without rhizomes, whereas F.rubra is creeping with rhizomes (underground stems).

Koeleria macrantha (Crested Hair-grass) – another small to medium sized grass, also quite a narrow leaf, sometimes only 1 mm wide but usually to 4 mm or so.

The leaf is folded down the middle (like a book) but easily opened out to reveal a markedly ribbed leaf surface, i.e. with 3 broad, parallel ribs or ridges running down the leaf, this makes it very corrugated in transverse section.

The leaf is also glaucous and densely hairy above. It’s a cute grass in flower (with silvery inflorescence) but Dr M thinks it’s ribbed and hairy leaves make it a cute grass even when not in flower!

Very characteristic of dry, short chalk grassland turf, and if you want to find it, seek out the very short grass in bare, open areas e.g. on bumpy ground or near ant-hills etc.

Briza media (Bm: Quaking Grass) – this is another small to medium sized grass, but the leaf here is not so narrow as the species above, usually about 5 mm or so wide, and the youngest leaf is rolled in the sheath, like a furled flag.

The leaf blade sometimes has purple blotches and the leaf tip is slightly hooded or rolled at the pointed apex.

The mature leaves are very clearly held in two ranks (no chance of mistaking this for Cyperaceae!) and are usually held out flat, 90 degrees to the sheath and parallel to the ground.

Dead easy to spot when in flower due to the beautiful, quaking spikelets, but actually is it is also not a difficult grass to spot in the vegetative state, once you get your eye in!

Helictotrichon pratense (Hp: synonym: Avenula pratensis) (Meadow Oat Grass) – as all chalk grassland herbs, this can be a very small plant when in short, grazed turf (as here), but it can also grow quite large, with tough, wiry leaves only about 4 mm wide but up to 50 cm long and often twisting or spiraling somewhat.

The youngest leaf is folded in the sheath and the leaf surface is glaucous and pruinose (with a bloom like on the skin of fresh, wild plums) and with lines of tiny white dots (actually indicating the position of stomata).

But here, due to the steep slope, shallow soils and sheep grazing the plant is tiny! Not much to go on for ID, much easier in the field when you can handle the plant and check it with a hand lens, but the sharply pointed leaves and the bright yellow-green colour are hints!

Hippocrepis comosa (Hc: Horseshoe Vetch) – pinnate leaves clearly hint at Fabaceae, and the presence of a terminal leaflet and no tendril tells us it is NOT a true vetch (Vicia sp) but the vernacular name is vetch nonetheless!

Horseshoe Vetch is another characteristic plant of species rich chalk grassland and its distribution is restricted to the chalk in southern England. It is also the food plant of the caterpillars (larvae) of the Adonis Blue butterfly.

Lotus corniculatus (Lc: Bird’s-foot Trefoil) – the leaves here appear trifoliate (a good Fabaceae character) with a pair of leaf-like stipules at the base of the leaf stalk. However, actually all five are leaflets and the real stipules are tiny!  You learn something new every day!

A very common plant in many different types of grassland and other vegetation types, so by no means restricted to chalk grassland (distribution map here).

Leontodon hispidus (Rough Hawkbit) – the hairy dandelion-like leaves tells us it is one of those damned elusive yellow composites!  But, the important thing is whether the hairs are simple or forked. Now the little plant here is quite hidden and the image is not razor sharp however the forked hairs are quite discernible:

Poterium sanguisorba (Ps: synonym: Sanguisorba minor) (Salad Burnet) – the pinnate leaves with toothed leaflets hint at Rosaceae, and, if you were in the field, you would find stipules at the base of the leaf stalk to clinch the family ID!

In the field you can see the plant is slightly hairy, the leaflets are dark green above, glaucous below and you might get a faint whiff of cucumber when you bruise the leaves.

Another typical chalk grassland species, though not as restricted as Hippocrepis, (map here) and the leaves are edible as befits the cucumber odour and the vernacular name!

Campanulaceae – Bell-flower family (Dr M has not yet posted on the Campanulaceae family, but watch this space…!)

Campanula rotundifolia (Cr: Harebell) – Actually this is one of the easiest dicot families to ID from vegetative characters because the leaves have white hydathodes at intervals around the leaf margin. 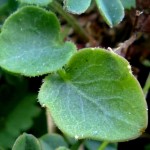 According to the veg key hydathodes (NB don’t fall into the common trap of calling them Hydra-thodes, they are Hyd-athodes) are glands which exude water and are usually confined to the apex and teeth of a leaf.

Harebell is the most common of the Campanulaceae in chalk grassland but also grows in other habitats (map here) and the basal leaves are small (0.5-1.5 cm diameter) and rounded (hence the vernacular name) while the stems leaves (not seen here) are more linear.

Dr M says: Hope you enjoyed that foray into eXtreme vegetative ID, how did you do? Contact Dr M if you think there are other plant species in the picture!

Dr M is planning: an introductory video to the veg key as it such a valuable skill to be able to ID plants when they are not in flower.

Dr M feels that: an introductory video is needed as many beginning botanists pick up the book, and then quickly put it down again! Why? Well because looks rather different to other more conventional keys and it  does take a bit of getting used to. But it is well worth the effort!

Dr M has yet to decide: quite what format such a video might take, and he hopes he will be inspired by his new MSc Plant Diversity students and MSc SISS students who are arriving in Reading as this post is being penned!