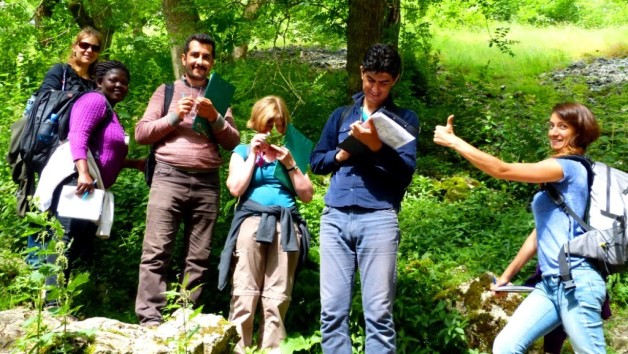 Day 5 Wednesday: Today is assignment day! Could explain why students were so (unusually?) quiet at breakfast!

Dr M started the day leading students in a walk from Malham village to Malham Cove with a spot test en route, Dr M pointing out twenty different plant species for students to ID there and then, no books, no notes, just their botanical knowledge and skills and native wit!

Reaching Malham Cove and the spot test over, students breath their first sigh of relief and Dr M left them under the watchful eye of Hermione and walked back a short distance to mark out an area of base rich flush vegetation then returned to fetch the students who then worked as a group to identify everything within the perimeter of the demarcated area. 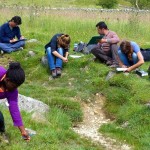 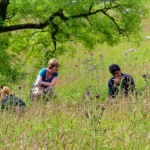 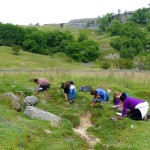 Students then worked on for an hour after which Dr M returned to check progress, and a further 30 minutes was allowed to complete the work.

Record sheets and lists were checked by Dr M against what was growing in the area. Students had risen to the challenge and done sterling work identifying no fewer than 16 grasses, 5 sedges and 3 rushes and 23 dicot species, a grand total of 47 species – eXtreme field botany for sure! 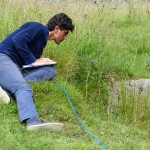 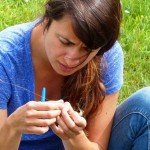 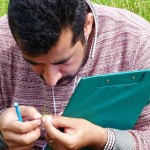 One “sedge” had been listed by the students but they did not know what it was so a specimen was “taken back” to identify by the Sedge Queen who later provided an object lesson in plant ID (see below).

From thence Dr M drove the group back to the FSC and to the Malham Tarn outflow stream for a look at aquatics and base rich flush species to add to our field course list.

Just as students were asking tricky questions about the orchids growing in the wet grassland, who should appear but David Streeter in the nick of time, offering an impromptu masterclass on the subspecies of Dactylorhiza incarnata (Early Marsh-orchid). 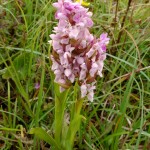 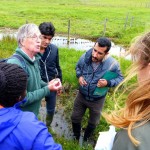 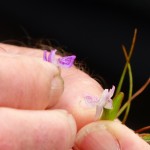 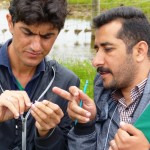 The evening ID: Sedge Queen on that unidentified “sedge”.

The Sedge Queen volunteered to work on the unidentified “sedge” from the earlier group quadrat, a correct ID in the classroom could add marks to the groups assignment, so no pressure! 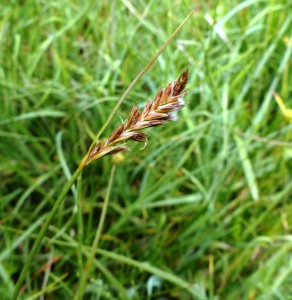 First she checked the flowers and on examination under the dissecting microscope she noted that these were bisexual, bearing both male and female parts in each flower. This was an important observation and meant that this plant, so far assumed to be a sedge, could not be a Carex because members of this genus have unisexual flowers, i.e. separate male and female flowers, usually on the same plant and often confined to separate spikes.

The Sedge Queen also noted the presence of long perianth bristles in the flower, these were retrorsely scabrid (and reminiscent of insect legs!), also she noted the shoots and inflorescence were flattened and laterally compressed.

So using this information and going through the family key to Cyperaceae in the book of Stace, the Sedge Queen reached the correct ID: Blysmus compressus (Flat-sedge), flat by name flat by nature! And an uncommon (RBC Vulnerable) plant of wet, base-rich grassland.

Being the last night the class packed up the classroom and some members of the group felt that an end of field course drink in the local pub was in order. But pubs are not just for drinking, and Guest Tutor Hermione made sure botany was not far away by bringing along a sedge from a patch growing in the nearby Malham Beck.

Enthused by the chance to witness eXtreme botany in the pub, Dr M challenged the Sedge Queen and her colleague Edwina Hugginbotham to key the sedge using the book of Stace in 5 minutes, speed keying at its finest!

Rising to the challenge, they made use of what little light there was glimmering from an overhanging light bulb, and Edwina read out the couplets whilst the Sedge Queen checked the characters on the specimen.

There was no time for uncertainty or prevarication, and the tension and excitement mounted as they tore through the couplets arriving at a correct ID, Carex acutiformis (Lesser Pond-sedge), in just 3.5 minutes!

Lesson for Dr M: speed keying (including perhaps a trip to the local pub) is definitely on the agenda for Dr M’s plant ID module next term!