Dr M’s mini-quiz #5 was about the plants used by a spider to support her web?

Here they are again: 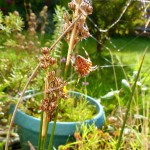 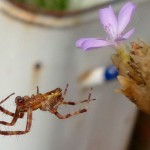 Well the family of the upright monocot (left) was pretty obvious, Juncaceae and the genus Juncus, but which species?

You might have wondered Juncus effusus (Soft Rush) but that species has either a lax or compact inflorescence, whilst the plant here has an interrupted panicle with erect branches.

The plant was actually Juncus maritimas (Sea Rush) and the other important characters were not visible in the original image – so you have done very well if you got it to species!

So a bit tricky from the information provided, and the second species arguably at least as tricky, especially as it is a rare species in Britain (grown in his garden by Dr M from seed).

Well the petals obviously fused into a tube with 5 pink petals might have hinted at Caryphyllaceae (correct) and looking rather like Dianthus (incorrect!).

However, the flowers grouped in heads and surrounded by papery bracts is a feature of the genus Petrorhagia and the species is Petrorhagia prolifera (Proliferous Pink) which is native on dry, sandy banks in parts of Norfolk and a few other places and introduced elsewhere.

OK, so maybe a rather tough weekend quiz this one! Dr M will try and be a bit more gentle with you next time!