Autumn brings eXtreme botanical challenges of the bryophyte variety: mosses flourish and become especially luxuriant in the wet autumnal weather and it is an ideal time to renew and refresh our acquaintance with these marvellous little plants!

Dr M has been helping his colleagues unravel the mysteries of mosses in a lunchtime CPD session at Hemel Hempstead.

Bryophyta is the botanical term for the group of plants known as the mosses which are lower plants (non-vascular plants).

Sometimes the term “bryophyte” is used more generally to include mosses and another group of lower plants, the liverworts, but technically liverworts are in the group Marchantiophyta. Dr M will post on liverworts another time!

So here we take Bryophytes to mean the mosses, and there are around 700 species of moss in Britain and  it can be a struggle to tell these apart.

A common reaction is: “…surely mosses are just little green plants all alike and indistinguishable from each other?”

To which Dr M says: “Well actually no, they are all have their own individual character and it doesn’t take too much effort at least to tell the common ones apart. 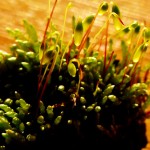 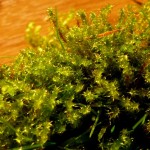 Growth habit: It is useful to divide mosses into two main types according to the growth habit – we call these acrocarps and pleurocarps.

Acrocarpous mosses:  here the shoots are upright and unbranched (or only sparingly branched) and the whole plant may form neat cushions or carpets, or more uneven patches or as individual shoots, and if there are capsules, the capsule stalk (seta) arises from the tip of a shoot (i.e. terminal position).

Pleurocarpous mosses: here, in contrast, the shoots are prostrate and pinnately branched (sometimes unevenly), and the whole plant forms intricate mats or untidy wefts as a result of the interweaving branching, and, if there are capsules, the seta arises from the junction of one of the branches (i.e. lateral position).

NB Capsules are the spore-bearing part of the moss plant, capsules are very common in some species but they may be seasonal and may not be present at the time of collection, and some specis don’t have them at all or only very rarely.

So the first job is to have a really good look at your moss and decide which type it is, acrocarp or pleurocarp?

If your moss is an Acrocarp the following characters are useful to help determine which genus or species you have: what shape is the leaf and do they have hair points? does the leaf have a central nerve or mid-rib? is the leaf margin toothed? is the leaf opaque (or partially) or more transparent?

Click on the images once and then a second time and you will see a lot of the important details. 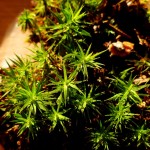 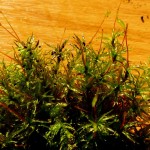 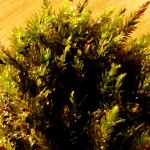 Bank Haircap (Polytrichastrum formosum) – This is a common moss growing on soil in deciduous woodland, with stems reaching about 5-10 cm tall (excluding the capsule) and growing on soil, e.g. at the base of trees. The leaves are thick and dark green (due to layers of lamellae on the surface), toothed leaf margin and the whole plant like little palm trees and robust and not drying out very quickly.

Common Smoothcap or Catherine’s Moss (Atrichum undulatum) –  This is another common woodland moss with stems 2-5 cm tall growing on soil often in clearings. The leaves have a thick dark green midrib (with lamellae, but just confined to a narrower midrib than Polytrichastrum). The leaf has a transversely undulating surface (wavy) and a toothed leaf margin (often with double teeth), the whole plant drying out very quickly when collected – but can be rejuvenated by spraying with a fine mist of water! Capsules are quite common, narrowly cylindrical and curved.

Swan’s-neck Thyme Moss (Mnium hornum) – Can be confused with Atrichum but has no lamellae so the midrib is not so thick, and although the leaf margin also has teeth (again often with double-teeth) the leaf surface is not wavy. This moss also dries out rapidly but rejuvenates with water. Capsules are quite common and are pendulous with a tapering neck (quite different from Atrichum).  This is a moss of a range of habitats and may be dominant on earth banks and soil at the base of trees as well as on dead wood. 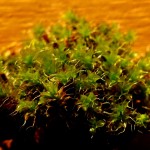 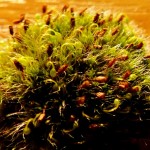 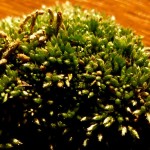 Great Hairy Screw-moss (Syntrichia ruralis) – This is a bright golden green moss, quite robust, but smaller than the mosses described above, with stems 2-3 cm tall, forming irregular cushions on old walls, roof tops and rocks. The capsule when present is erect and narrowly cylindrical.  The leaves are tongue-shaped with conspicuous long white hair points. The whole plant becomes all screwed up when dry (even more than Atrichum etc) hence the common name.

Grey-cushioned Grimmia (Grimmia pulvinata) – This moss grows as compact little grey cushions on walls especially where there is limestone or cement mortar, it is one of our most familiar and common wall mosses. The stems are 1-1.5 cm tall and the narrow leaves have very long white hair points. The oval capsules are held on re-curved stalks (seta) when young and which straighten as they age. More by Dr M on Grimmia here.

Silver-moss (Bryum argenteum) – Look closely on the edges of the pavement and there is a good chance you will find the silvery patches of this pretty little moss.  It is a small moss with crowded, egg-shaped leaves forming cylindrical shoots often less than 1 cm long with the appearance of miniature catkins.  The pendulous capsules are often abundant and held on short stalks (seta).

If your moss is a Pleurocarp the following characters are useful to help decide which genus or species you have: are the leaves curved over in one direction or are the leaves spreading around the stem in all directions? are the leaves toothed and do they have a midrib? 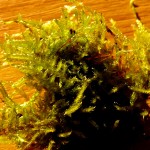 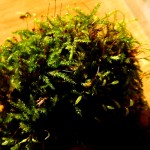 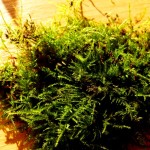 Cypress Plait-moss (Hypnum cupressiforme) –  One of the most abundant and also the most variable of mosses. This is a prostrate, pinnately-branched moss forming mats on top of walls, boulders, decaying logs, tree trunks and branches as well as on the ground. The leaves have only a very short midrib and are curved in one direction and overlap, rather like a cypress branch hence the common name and the specific epithet “cupressiforme ” = Cypress-like. Capsules are quite common and curved-cylindrical with a beaked lid.

Rough-stalked Feather-moss (Brachythecium rutabulum) – Another extremely common moss of tree stumps, this time of decaying branches and of boulders in woodland but also in grassy places and lawns. The shoots are irregularly branched and bright green or yellowish and glossy.  If you look at the pointed oval leaves with a lens you should see that the leaf margin is finely toothed and there is a obvious central nerve or midrib.  Capsules are common and there is no beak (unlike Hypnum and Kindbergia) and the capsule stalk (seta) is red and minutely rough with papillae hence the “rough stalked” of the common name.

Common Feather-moss (Kindbergia praelonga) –  A third really common moss, very shade-tolerant and may be dominant on shaded banks, bases of trees, rotting logs and rocks. Characteristically forming dark green wefts regularly pinnately branched and feather-like (hence the common name). The ovate, pointed leaves have toothed margins, a clear midrib and the stem leaves are broader than the branch leaves.  Capsules are not common but are curved with long beak.

Moss ID Books – a great recent book for identifying mosses is the British Bryological Society Field Guide. It is a brilliant guide for both the beginner and more experience bryologist alike. There is a wealth of colour photographs and diagrams and keys which (on the whole) really work! Check it out and get your copy now!

Dr M says: There are plenty of other mosses to find, watch this bryological space for more magical mystery mosses, coming soon!