Home   Dicots   More to Brambles than meets the eye (and the taste buds!)

More to Brambles than meets the eye (and the taste buds!) 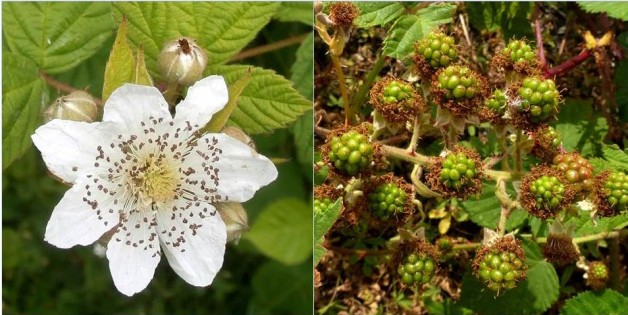 Dr M has been admiring the super-abundance of developing Blackberries (Rubus fruticosus L. agg.) in the hedgerows and it seems that the unusual combination of spring and summer weather has helped provide a bumper crop for the coming weeks!  Have your collecting baskets to hand and don’t miss out on this delicious food for free!

The genus (actually sub-genus, see below) Rubus includes a number of bramble species in addition to the familiar (but hugely variable) Blackberry (Rubus fruticosus agg.) which is known for its pinnate leaves, trailing stems, all with often vicious, downward-curved and wound-inflicting prickles, but compensating for injuries received by its delicious fruits! (actually drupelets – succulent fruits enclosing the seed and grouped together in the familiar black fruits that we harvest during our blackberrying forays!).

The other native “brambles” in Britain include:

Cloudberry (Rubus chamaemorus) – low, erect shrub with simple leaves and hairs rather than prickles on the stems, and orange fruits, a native shrub of bogs and mountain moorland.

But there is much more to the brambles than this!   Indeed this is one of the most taxonomically challenging of flowering plant groups, and the complication stems from a raft of biological processes including hybridization, polyploidy and apomixis (the production of seeds without sexual reproduction so seeds are genetically identical to the parent whereas more usually sexual reproduction results in each seed being a unique genetic individual).

To those unaware of this complexity, the familiar spiny and deliciously fruited Blackberry is generally recorded as Rubus fruticosus agg.  But the suffix “agg.” is important and stands for “aggregate” which refers to a group of species comprising several very similar species formerly regarded as a single species.  Most plant groups are identified as a number of genera and associated species.  However, genus and species is not sufficient to deal with the complexity in Rubus and a number of sub-genera have been defined as well as sections and associated species.  Indeed so challenging is the genus Rubus, that a whole discipline – Batology – has developed as the branch of botany that studies brambles Rubus species! Surely Batology must be one of the most extreme forms of eXtreme botany!  And why is it called batology?  Well this term stems from the scientific names given to the sub-genera such as Idaeobatus (with 117 genera and 9 sections), Malochobatus (115 genera and 7 sections) and Eubatus (132 genera and 6 sections).

Distinguishing between the 400 or so microspecies of the Rubus fruticosus agg. in Britain (don’t even ask how many in the whole World!) is well beyond the scope of this blog post, but those interested can find a valuable treatment in the Book of Stace.  For the rest of us, next time you go blackberrying bear a thought for the work of the dedicated Batologist devoting their working life to naming and organising every sub-genus, section, species and micro-species of Rubus currently known!