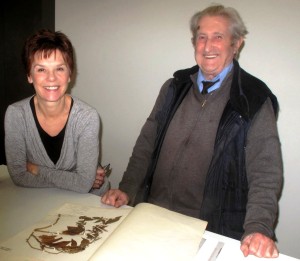 We cannot afford to lose our brilliant botanists, here Dr M reflects on the news of the death of Peter Sell late of the University of Cambridge Herbarium and botanist extraordinaire.

A school leaver at 13, spotted by his teacher as a gifted natural historian, Peter Sell started work in the Cambridge University herbarium aged just 15, where he stayed for the rest of his remarkable and botanically productive life.

Dr M ‘s first encounter with Peter Sell was back in the early 1980s when Dr M (then plain JM of course!) was working on his PhD on chalk grassland ecology at the Botany School, Cambridge.

Dr M had found a Hawkweed (Hieracium sp.), a notoriously complex group and known taxonomic speciality of Peter Sell, who has since done even more mammoth work on this difficult group, culminating in the publication in volume 4 of his magnum opus Flora of Great Britain and Ireland with Gina Murrell.

Dr M cannot now recall why he did this next bit.  But having collected the Hawkweed plant on one of his botanical excursions, rather than preparing a herbarium sheet as you might normally do, Dr M took the dried plant specimen and cut it into pieces and organised them into small paper bags, the flower in one bag, the achenes in another, the leaves in another and so on.  Don’t ask why, he doesn’t know, he just did it! He then took the motley collection of baglets from Room 16 (where he was ensconced as a new PhD student) along the hallowed corridors of the Cambridge herbarium and into the botanical hands of Peter Sell.

Dr M recalls quite vividly that Peter Sell was extremely courteous to this young extremely inexperienced botanist and, before suggesting what this mangled specimen might have been in a previous existence, respectfully pointed out that this was not the way to preserve plant specimens of any kind, let along one from this notoriously tricky genus!

This could so easily have been one of those excruciatingly embarrassing experiences suffered in the excusable ignorance of youth, but over which you might cringe for evermore.

Instead Dr M recalls it vividly to this day with the happy, slightly wry smile as befits the memory of a lesson well taught and one well learned! A small but telling recollection of one of our great botanists, greatly missed.

For a really lovely account of Peter Sell, see this article written in 1997 by Max Walters and Chris Preston, on the occasion of his election as Honorary Member of the BSBI.

Image credit: The featured image is of Gina Murrell and Peter Sell in the Herbarium, Cambridge 2011 – Image: P. Oswald.