A portrait of Rory McEwen: botanical artist and musician 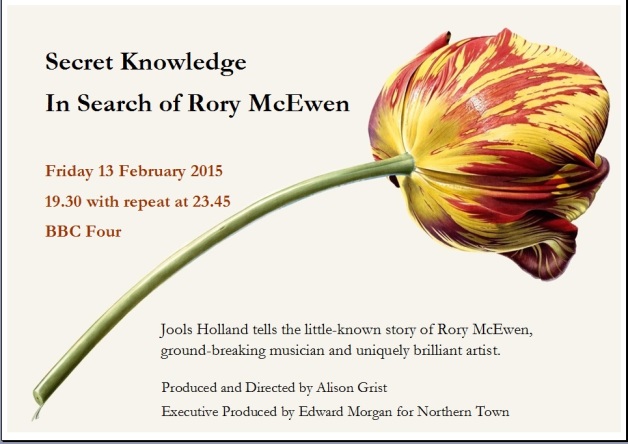 Friday night is botanical music night, on BBC Four this week at least, with an exploration of the life of Rory McEwen – botanical artist and musician.

In the latest episode of BBC Four’s fourteen-part documentary series “Secret Knowledge” Jools Holland tells the remarkable story of his father-in-law Rory McEwen – aristocrat, artist, folk singer and pioneering TV presenter, and the man who brought the blues to Britain.

Illustrated with rare archive and McEwen’s own beautiful paintings, the programme features contributions from an eclectic cast including Van Morrison, David Dimbleby and Jonathan Miller.

Through a series of personal testimonials from McEwen’s family and friends, and the artists and musicians he influenced along the way, including Van Morrison, this film follows McEwen on his life journey.

From his years on the Scottish borders as a young man, to his time at Cambridge when he played guitar in the Footlights, onto his first road trip across America in 1956, when he taught himself the blues.

McEwen’s other love was botanical painting, which he practiced throughout his life. He is best known for his studies of plants, painted in watercolour on vellum.