Social media to the rescue! 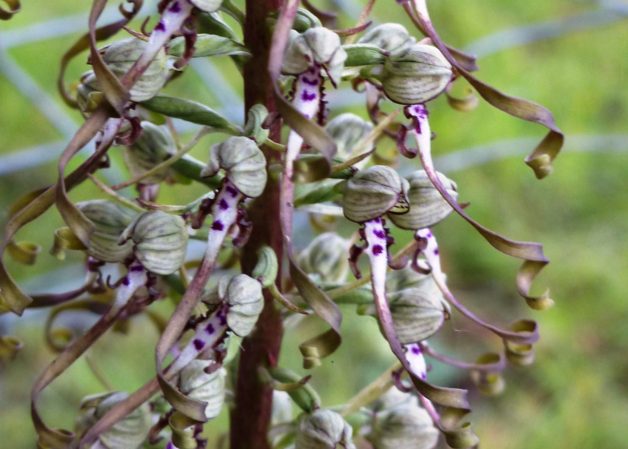 It is not uncommon to hear about common plant sightings from botanists via social media these days but on 16th June I received a tweet from a past Reading botany student concerning a rare plant spotted in Reading, this was a Lizard Orchid (Himantoglossum hircinum) which had been photographed on a busy roadside verge.

The Lizard Orchid is a very rare and legally protected plant most well-known from the sand dunes at Sandwich Kent.  It has only rarely been recorded from Berkshire and never before in Reading so this was likely a new record and, judging from the picture, a fine and imposing specimen standing around 50cm tall.

Dr M says: The story that followed is a good example of how social media can galvanise action and come to the rescue in times of need.

Reading Borough Council was informed of the plant find by two past University of Reading botany students Rupert Wilson and Stephanie Bird but their first reaction was:

“We simply are not geared up for protecting plants on areas that are routinely mowed.”

Whilst this was perhaps an understandable response in general terms, the protected status of the plant was of concern.  There followed a flurry of tweets including one from Trevor Dine’s, Botanist & conservationist at the charity Plantlife stating:

“the Lizard Orchid is protected under Schedule 8 of the Wildlife & Countryside Act 1981 meaning “intentional picking, uprooting or destruction” is illegal. Knowingly mowing it down could constitute an offence.”

This pretty quickly prompted a response from the council: “Please can you tell us exactly where you found it, and we will seek to protect it. If it has been there for some years, it may well have been coping with the mowing regime.”

Details were sent to the Council who replied: “Hi Trevor, thanks for your message. We are taking steps to locate the orchid in order to protect it.”

Then on June 20 came the good news from the Council: “Orchid Update: The Lizard Orchid is now well protected.”

Trevor responded: “That’s great news! Hopefully you’ll allow the orchid to set seed so that it can thrive in the future. We have lots of advice & guidance on road verge management for rare & common flowers, all of which support a host of pollinators & other wildlife.”

Dr M visited the site later and viewed the post and wire tree guard which provides a very satisfactory temporary protection from the verge mower. 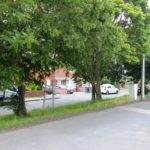 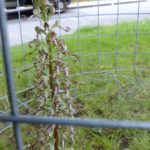 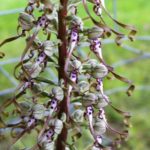 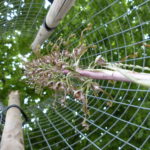 The Lizard Orchid is an unusual and strangely attractive plant with flowers reminiscent of shed lizard skins hence the common name.  This verge location is slightly at odds with the usual habitat for this species which is open chalk grassland, though the species has been recorded occasionally on roadsides and in quarries in south-east England. This plant was restricted to Kent until the early 1900s, when it underwent a remarkable expansion, reaching as far north as Yorkshire. After 1934, it declined rapidly but maintained this range. Many occurrences are of monocarpic (flowering then dying) plants; with 9-11 populations recorded each year.

Dr M says: The Reading plant could be one of these temporary occurrences and so it will be important to let it set seed so that new plants can have a chance to establish and maybe sustain a population for the future.

Note: Mick Crawley’s Flora of Berkshire has the following to say about the Lizard Orchid in Berkshire:

A Red Data Book species which increased its distribution markedly between 1900 and 1930. It was formerly restricted to Kent, but spread as far as Yorkshire in the north, and Devon in the west. It looks as if this increase was transient, and the distribution has since contracted markedly to just 2 large populations at Sandwich Bay in Kent and Devil’s Dyke in Cambridgeshire. Since 1987, however, at least 7 new populations have appeared, so it is well worth searching for re-established populations in the Berkshire downs.

East Berks: no records from the eastern chalk.

West Berks: not in Druce. Tall, open chalk grassland; very rare, sporadic or extinct. Pitchpole Wood at Letcombe Bassett [3784] in 1936 (OXF), and Lollingdon Hill above Cholsey [5785] in 1921 (OXF) and 1979. There is a field record from Kingston Lisle [3287] in 1970. It is not known how these populations became established nor how long they lasted, but they may have been single, essentially casual establishments.