Dr M takes a big pea on the roadside…

This rather magnificent member of the Pea family – Fabaceae – is very conspicuous on roadsides and waste ground around Reading and much further afield at the moment. 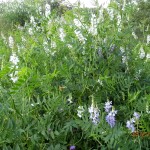 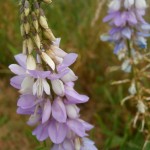 Have you spied it already on your travels? Do you know what it is?

Clue: It’s not native to Britain, but cultivated forms are often planted in gardens and have won horticultural prizes!

Dr M says: OK, here is the Fabaceous lowdown on the roadside Pea!

It’s most familiar common name, Goat’s Rue, derives from gale (milk) and ega (to bring on), and it has been used as a milk promoter in small domestic animals (hence the name “Goat’s rue”).

It is a herbaceous perennial native to the Middle East but extensively naturalized in Europe, Western Asia and Western Pakistan.

The plant has been extensively cultivated as a forage crop, a prize-winning ornamental, a bee plant and as green manure though it has proved too toxic for widespread agricultural use.

It is considered a Neophyte in Britain where it is naturalised in roadsides, waste places, railway banks, gravel pits and rubbish tips especially in the south.

Though introduced into cultivation by 1568, and first recorded in the wild in 1640, the spread of this species has been very recent.

It was not mapped in the 1962 Atlas of the British Flora, yet in parts of London is now found in 75% of the tetrads in each 10-km square. Whilst predominantly an urban plant, it is now spreading into rural areas. possibly along the road network.

It self-seeds and can form a large seed bank, so that it can be locally dominant for a year or two following soil disturbance but Mick Crawley in his Flora of Berkshire reckons it is soon out-competed by perennial grasses.