There was a bit of a miniature plant theme running through the day, early on  we encountered the immensely tiny Radiola linoides (Allseed in the Linaceae) and mini examples of the annual grasses Aira caryophyllea and Bromus hordaceous ferronii, the latter with just a single spikelet!

There were a number of new and unfamiliar plants and botanical memories were liable to lapse from time to time, so our resident Botanical Wizard Carter introduced the invaluable “Thingummywhatsit” in the “Watchermecallaceae” for all those botanical senior moments! 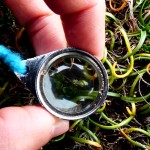 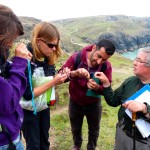 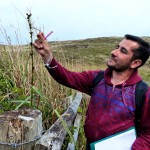 The day ended with a rather spectacular “little and large” comparison of the Cyperaceous variety when we encountered the tiny Isolepis setacea (Bristle Club-rush) not far from a majestic stand of Cladium mariscus (Saw Sedge) one of the largest Cyperaceae in the UK, a photo opportunity for a dramatical botanical size contrast!

Of necessity a short post today as  Monday night is music night in Lizard village and Wizard Carter will be braving the rain (yes it’s raining folks!) and joining local folk musicians including the possibility of a song or two from Dr M!