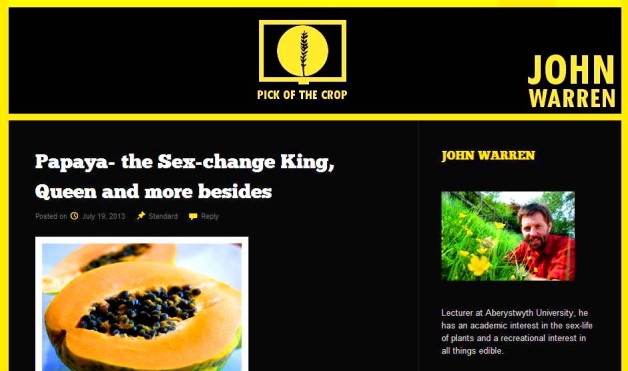 John Hieronymus Warren is a self-confessed grumpy botanist and lecturer at Aberystwyth University (2).

John has an academic interest in edible plants and a recreational interest in the sex-life of plants…or is it the other way around? I can’t remember, but you can certainly check all the details on “Pick of the Nose” his shiny black and yellow botanical website packed with fascinating facts and anarchic anecdotes.

John is a champion of the the Aberystwyth degree in plant biology and a passionate advocate of botany in higher education.

“The thing that sells the plant biology degree here at Aberystwyth” he says: “is the hard data on jobs per graduate. The ratio of plant biology graduates to jobs asking for plant biology is about 2:1, in zoology it is close to the national average of around 80 graduates per advertised job.”

So more evidence, if evidence were needed, that botany is not dead but alive and kicking and being taught in Aberystwyth (and University of Reading!) among other places!

Below is John Warren’s article all about why plants are wonderful and why zoologists – even if they are not villainous Dr Evils (this was just Dr M being mischievous) – do need to love and respect botany, as we all must, for the joy of plants and for the future of humankind, so read on…

“At a tender and impressionable age my generation was systematically and ritually terrified by the state, by being shown Protect and Survive and other flickering public information films that told us we were all going to die. Back then, the world was a simpler, scarier place. We believed in the technology of Tomorrow’s World. But we also knew that the same science was probably going to turn us to dust courtesy of Einstein’s famous equation:

“Now, of course, working one day a week, commuting by monorail and sporting skin-tight tinfoil suits, we know better. In spite of “Climategate” and the ostrich-like global-warming deniers, we know that the world is not going to be cooked in an instant like a ready meal in a microwave, but will be slowly simmered like the mythical frog being boiled in a laboratory, so gently that it does not detect the rise in temperature until it is too late.”

“In my youth we expected the 21st century to be the age of physics, but it turns out that the science of our time is biology and the most important of equations is not Einstein’s, but the one representing photosynthesis:

OK, I understand that not everyone appreciates the beauty of equations, so in words it is:

But to make this simpler still, albeit even more controversial:

Lots of Animals = Atmospheric Carbon (rising global temperatures) <->Lots of Plants = Fixed carbon (all is well with the world).”

“Photosynthesis is effectively reversible as respiration (the reaction by which animals burn plant material to gain the energy they need to function). Plants capture energy, lock up carbon and make useful things, whereas animals burn useful things to release energy and carbon dioxide.”

“Cutting the crap, what I am saying is that the world is doomed because we have an imbalance of animals and plants. But any ecologist will tell you that such equilibrium equations balance themselves out naturally. Unfortunately, this equation is currently balanced thus: all living animals (too many humans) are balanced against all living plants, plus many of the dead plants. That is, we can support a human population of this size only because it is supported by oil, coal and gas (the plants of former ages). The only way to balance this is more dead humans, or fewer humans. Neither of these options appears acceptable, so, QED, the Earth is screwed.”

“But perhaps there is a Tomorrow’s World-style technological solution. If we cannot reduce the number of animals, perhaps we can increase the number of plants or their ability to fix carbon. Unfortunately, here again we come crashing into the same equation again in another form:

Nobody wants to be a botanist. Plants are boring, they don’t do anything, and animals are majestic, beautiful, cute and dynamic. In a world of free-market universities and student choice, we have just 10 universities offering degrees in plant science, each struggling with a handful of students, while there are about 40 universities offering zoology, all with students bursting out of the lecture rooms (3).”

“I am not arguing that zoologists are villainous Dr Evils determined to destroy the Earth (4), but that many of them are plant scientists whom we have failed to inspire. So can we save the world and recruit a new generation of botanists? Or do we hope that before they go extinct, the last few plant scientists are able to create a super-efficient biofuel crop?”

“Nope. As the number of plant science degrees in the UK looks likely to fall again, it’s obviously easier to sit in this nice warm beaker with the zoologist and the frog and wonder if it really is getting hot in here (5).”

(1) This article first appeared in  Times Higher Education 17 June 2010, you can read the original article here, though its more interesting to read it here at Dr M Goes Wild, topped and tailed as it is by Dr M’s unique brand of witticism, inaccuracy and innuendo.

(2) John’s middle name is not actually Hieronymus, indeed his middle name doesn’t even start with an ‘H’, but Dr M thought it looked especially fine against the dramatic black and yellow of John M Warren’s homepage (where John’s actual and real middle initial “M” is unlikely to stand for Michaelis-Menton, but then again John Michaelis-Menton Warren sounds impressively splendid).

(3) Despite the passage of four years, the facts in John’s article still pretty much stand, though rather than ten Universities offering plant degree programmes, the number now is nine, and not all of these were in John’s 2010 list, there have been losses and gains among the HE institutions teaching botany and plant degrees. For example at University of Reading we have lost the BSc Botany a couple of years back, though the MSc Plant Diversity remains as strong as ever. Oh, and there are probably now more than 40 institutions offering zoology, and still no doubt bursting at the seams with students, not that Dr M suffers from zoology envy!

(4) Dr M has always been impressed how context changes meaning so!

(5) Despite the pessimism, it is good to see a core set of institutions still offering the botany subject albeit re-branded into plant science or plant biology. Check out Dr M’s post “Botany is dead, long live eXtreme botany” for more discussion of these issues and championing of the glorious “B” word.