Home   BSBI   Giant Hogweed: a new contribution to understanding this plant in the UK

Giant Hogweed: a new contribution to understanding this plant in the UK 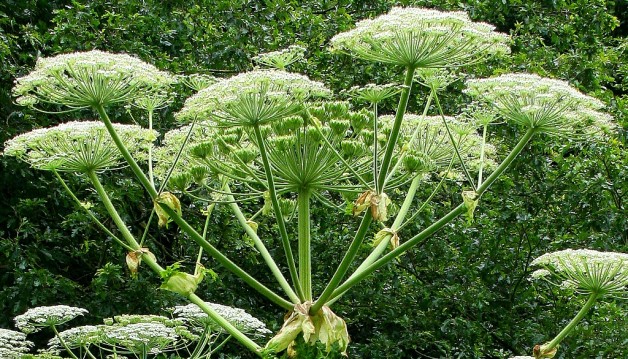 Dr M loves it when his students work gets published!

The paper, co-authored by Amy Denness, James Armitage and Alastair Culham, was published in the December 2013 issue of the New Journal of Botany published by the BSBI.

The work was carried out in collaboration with the Royal Horticultural Society as part of Amy’s RHS Fellowship which is awarded annually to a student on the MSc Plant Diversity at the University of Reading. 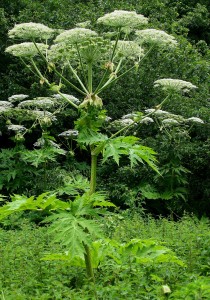 Giant Hogweed in the UK – is it really Heracleum mantegazzianum?

Details of the paper are given below, but Giant Hogweed is a plant who’s natural range is in the Caucasus and Central Asia. It has only been found in Britain since the 19th century when it was introduced by Victorian gardeners due to its impressive architectural appearance, indeed Dr M is rather fond if it as a landscape plant of large gardens!

However, as with a number of non-native garden species, it soon escaped from the confines of Victorian gardens and is now well established as a naturalised species and is spreading in the UK.

Another important feature of the plant is that the sap can cause photodermatitis (as do several native members of the Apiaceae such as Wild Parsnip (Pastinaca sativa) and Common Hogweed (Heracleum sphondylium)) and it is this toxicity, as well as the ability of the plant to spread, which are the reasons why the plant is included in the list of invasive non-native plants on  Schedule 9 of the Wildlife and Countryside Act (1982).

Amy’s work is important because the taxonomy of the species has been in doubt for a long while and the contention is that there are several different large Heracleum species in the UK and not just Heracleum mantegazzianum.  If this is so (and Amy’s work confirms that it is!) then there are obvious implications for UK Wildlife legislation.

Here is the abstract in full:

“The identity of giant hogweed species in the British Isles has been under debate in recent years. A morphometric analysis of fruit characters was used to study the number and identity of giant hogweed species occurring in these islands. Five clusters were identified, probably equating to species, to two of which the names Heracleum mantegazzianum Sommier & Levier and H. lehmannianum Bunge are tentatively attributed based on inclusion of type material. Details of the vittae and stylopodium are shown to provide a high level of discrimination and a preliminary key based on fruit characters is provided for the clusters identified. The legislative implications of these findings are considered and an amendment to Schedule 9 of the UK Wildlife and Countryside Act (1981) is advocated. An additional study of furanocoumarin content confirms that all naturalised populations of giant hogweed, regardless of identity, have the potential to cause phyto-photodermatitis and pose a threat to public health.”

Check for the full article here

All images by Amy Denness who is also a fine landscape and wildlife photographer, check out her wonderful images here