Botanical University Challenge – at least 5×4 reasons to be cheerful about the future of botany! 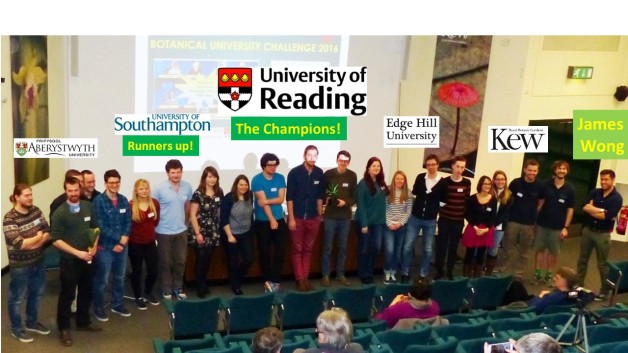 The outcome could not have been better!  The first Botanical University Challenge drew five fabulous teams with botanical knowledge, skill and enthusiasm in spades. Literally!

Indeed, by all accounts, this was a great day for British botany!

Not only was it enjoyable and fun but it was also a supremely optimistic day for British botany, and its future looks secure in the hands of these talented and enthusiastic young botanists!

Colin Clubbe – Head of conservation at our host RBG Kew – gave a warm and generous welcome and James Wong – self-confessed botany geek – provided inspirational words of introduction: “plants are fundamental to our culture, to how our brains are set up and to society, we have a human fascination for plants”.

You can see the whole intro from these two botanists here.

There will be a YouTube video of the best of the rest as soon as possible, but in the meantime, to give those who couldn’t attend a flavour of the day and to bring back some memories to those that were there, here, in a nutshell and few screen grabs, is the days proceedings:

After the initial genius of an idea (the origin of which is lost in the mists of botanical time) and what seemed like an eternity of organisation and  planning, Thursday 10th March 2016 arrived at last: Botanical University Challenge day!

From about 11 am the teams arrived at the Jodrell Building at RGB Kew – the bus with the Aberystwyth team driven by co-organiser Professor John Warren, setting off at the ungodly hour of 5 am!

Dr M and John Warren welcomed the teams and there was an introductory session and a run through of, more or less, what was going to happen (though no-one could quite have predicted what would happen in the first round (you’ll have to wait for the video to find out!). 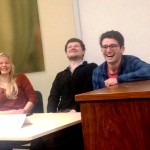 Having a laugh in the run through 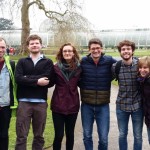 Enjoying the gardens before the main event 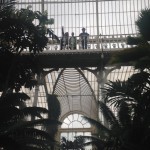 Then teams had a hour or so to visit the gardens and glasshouses and get fed and watered in preparation for the main event at 2 pm. 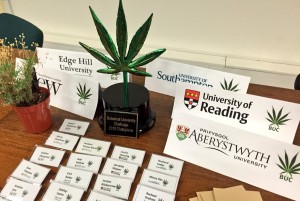 The BUC Trophy plus team name tags ready and waiting!

The main event: Botanical University Challenge 2016, started pretty much on cue (and at Kew!) and after a warm and generous welcome from Colin Clubbe (Head of Conservation at Kew) and inspirational words from our question master James Wong (our botanical Paxman), Dr M stepped forward to give his own welcome.

This included some unexpected tidings from the Prime Minister’s Office and from H.M. The Queen herself, who sent some kind words insisting that, despite recent newspaper headlines, her key interest is NOT Brexit but rather who will pass the BUC! 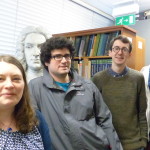 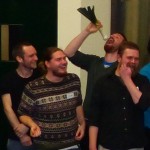 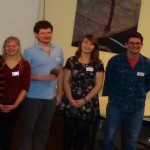 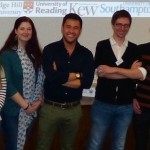 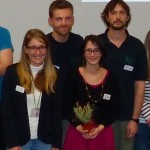 Then the teams and their mascots were introduced one by one:

John Warren introduced IBERS, Aberystwyth: Team Salvias and Alliums (or according to James Wong “the beardies”) with their mascot Josh (the Leek!). The BUC teams ready to do botanical battle!

Following this was a group photo and then John Warren explained how the afternoon was going to run. With a prime number of (five) teams competing it was not possible to have a straight forward University Challenge type play-off between pairs of competing institutions. Instead the #BUC2016 started with James Wong selecting two teams at random (from little brown envelopes) for a round 1 play off.  The winning team would go to later rounds while the losing team would leave the contest at this stage.

In the event it was the host institute Kew and Reading that were selected for the first round playoff.  Not exactly Dr M’s ideal draw this, afterall Kew and Reading having a long and close relationship with many Reading alumni working at Kew and/or with other long standing and close connections.

Reading vs Kew, round 1

However the watch words for this #BUC2016 day were fun and participation not competition and winning, so the two teams entered the BUC arena in friendly spirit but nonetheless prepared to do significant battle for a place in the semi-finals! James Wong ready to “Science the shit” out of the BUC!

The two round 1 teams in their places, James Wong kicked off the event with a quote from “The Martian” announcing “let’s science the shit out of this!”

And so the questioning began, and what a diversity there was! Botanical latin, fruits, vegetables, ethnobotany (James Wong’s fav!), oh and Welsh plant names, classical music and poetry and literature! Yes, #BUC2016 was a true demonstration of the wide impact botany has had on the world and its people!

This diversity did stray beyond the accepted norms, and fungi were there even though, as James Wong pointed out, they are a totally different Kingdom!

Here as a taster, is the first question: In angiosperms the structure traditionally called the pistil is more precisely called what? (A: The Carpel).

Many other and varied questions followed, and eventually Reading came through, and Kew were the first team to bow out. the next round saw Edge Hill do battle with Southampton. Edge Hill had a very natty way of holding the bell off the table in absolute readiness for the jingling thereof.  But in the end this was not sufficient to see off their opponents and it was Southampton who emerged the victors of this first semi-final. The second semi- was Reading against Aberystwyth, or seagrass vs leeks! Being the teams of the organisers Dr M and John Warren respectively this was always going to be a pairing to watch out for!  And in the event there tough competition as the two teams jostled and jousted for the lead. But eventually the bearded leek-eaters of mid-Wales succumbed as Reading once again proved the tough act to beat. Reading vs Southampton – the final!

This left the truly grand final between Reading and Southampton fighting for the title!

Again Dr M had some mixed feelings as one Southampton team member was, until recently a student on his very own MSc Plant Diversity at Reading, such close inter-connections not surprising given the close-knit nature of the global botanical family. 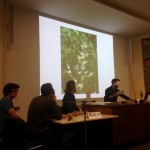 An early lead for Southampton looked likely to put an end to Reading’s previous promise. However, Reading eventually managed to break their duck and pulled ahead and, after a nail-biting final (the stuff of botanical dreams!) Reading emerged as the botanical heroes, or “teacher’s pets” as James Wong put it!

So, with some final words from James, the Reading team were declared the worthy champions and lifters of the Cannabis sativa leaf (don’t ask!). 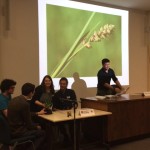 After a magnificent afternoon of botanical facts, figures and fun, all teams were applauded for their knowledge and skill and good humour. There was a short closing vote of thanks from Dr M and a final photocall and then the teams and followers adjourned to the nearby pub most aptly named “The Botanist”. Amidst a bevy of  botanical beverages certificates of participation, signed by James Wong and the organisers Dr M and John Warren, were distributed to the teams and much botanical banter and joviality ensued. 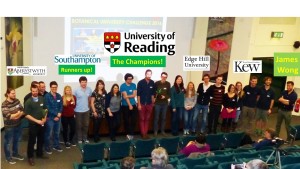 The winners, runners up and all the BUC teams!

The final verdict then?  #BUC2016 was a huge success and had absolutely NO losers only winners for botany and botanists!

The second final verdict? The event MUST be repeated, probably next year at Reading to coincide with Fascination of Plants Day so get in touch with Dr M or John Warren and stake your claim to a place in #BUC2017!

Final thanks go to RBG Kew for hosting and to Laura Rosario and Rhian Smith for logistical support before and on the day, Jame Wong for being such a sport and skilfully hosting a challenging contest, to various colleagues for the questions and finally to John Warren and Dr M (i.e. me!) for the initial idea and for seeing it though to its conclusion!