Home   eXtreme botany   To be Cotoneaster or not Cotoneaster? That is the question…?

Cotoneaster is a diverse genus of shrubs and small trees in the family Rosaceae and much beloved of gardeners (but less so by  British conservationists see below!).

There are between 70 and 300 different species of Cotoneaster, with many apomictic microspecies considered species by some authors but only as varieties by others.

Related to Crataegus (Hawthorn), Pyracantha (Fire Bush) and Sorbus (Rowans), Cotoneaster is native to temperate Asia, Europe and north Africa, with particularly high diversity in the mountains of southwestern China and the Himalayas.

Cotoneaster is a difficult group to ID, being complicated by apomixis and hybridisation. Careful examination of flowers, ripe fruits and summer leaves is needed and those interested should take a look at Clive Stace’s treatment in The Book of Stace.

Only one species is native to Britain (C.cambricus) but there are dozens of species widely planted in gardens and parks in Britain for their attractive foliage and red “berries”.

BUT, not all are delighted by these ornamental plants! Birds are attracted to the fruits and many garden species are dispersed via seeds transported in bird poo and have become widely and extensively naturalised on waste ground.

More significantly, in semi-natural habitats, such as the limestone grassland of the Great Orme National Nature Reserve in North Wales, the invasive Cotoneasters threaten the existence of our only native Cotoneaster cambricus.

For this reason, Cotoneaster species are listed on Schedule 9 of the Wildlife and Countryside Act 1981 England and Wales, the so-called invasives, and it is an offence to plant or otherwise cause these species to grow and spread in the wild.

Cotoneaster is a very diverse genus but some of the commonest of these invasive species have small leaves e.g. Cotoneaster horizontalis (Wall Cotoneaster). But if you find an evergreen shrub with small green leaves can you be sure it is Cotoneaster?

The answer is no! (well I guess you saw that coming!)

Not all evergreen shrubs with small leaves are Cotoneaster, obviously! The botanical world is more diverse than this!

So, how can you tell Cotoneaster from other similar but unrelated plants, such as those illustrated above?

Well naturally, as in any problem of eXtreme botany, the answer lies in close attention to the important ID features at the family level for a start. 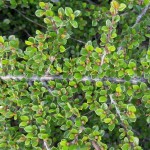 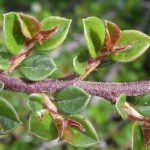 These two are Cotoneaster horizontalis (Wall Cotoneaster), as in many members of the Rosaceae, the shoots are dimorphic, with long shoots producing structural branch growth, and short shoots bearing the flowers; this pattern often developing a ‘herringbone’ form of branching.

Both evergreen and deciduous species occur and leaves are arranged alternately on the stem and with a great variety of size and shape, small, large, ovate to lanceolate. Flowers appear in spring and may be solitary or in corymbs of up to 100 clustered together. The fruit* is small and berry-like and coloured pink, red, orange maroon or black with 1-3 (5) seeds. These are what the birds like!

Here are three shrubs with small leaves, are they all Cotoneaster? 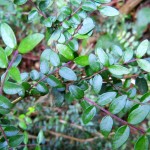 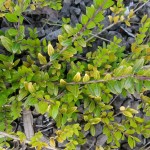 The answer is NO, only the middle one! With flowers or fruits it would be easier, but even without these you can see that Cotoneaster in the middle has alternate leaves while the other two shrubs have opposite leaves. 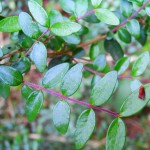 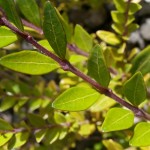 Close-up it’s even clearer. Again in the middle is Cotoneaster horizontalis (Wall Cotoneaster) with alternate leaves and herring-bone structure.

Either side are species of Lonicera (Honeysuckle) in the family Caprifoliaceae.

Dr M says: It’s easier when you know how!