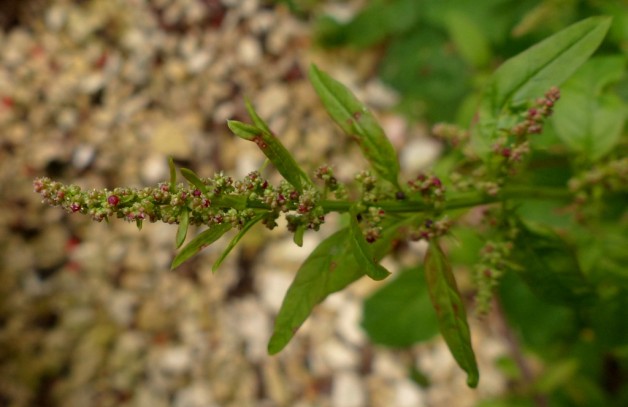 OK, the soggy Bank Holiday Monday is over and now we are into a soggy week at work!

You’ve had plenty of sodden hours to contemplate this plant so here’s the low down:

The mystery plant is in the family Amaranthaceae which includes three genera.

(1) Chenopodium which is a genus of annual herbs with grooved, often striped stems and leaves which are often mealy (with bladder hairs), the tiny flowers are born in clusters on branched inflorescences (cymes), there are 5 tepals sometimes partly fused and 2-5 stamens, the fruit is a tiny nutlet with one seed.

(3) Amaranthus is not native to UK but occurs as a introduced casual and garden escape.

The mystery plant is Chenopodium polyspermum (Many-seeded Goosefoot or Allseed – the name derived no doubt due to the conspicuous small black seeds). 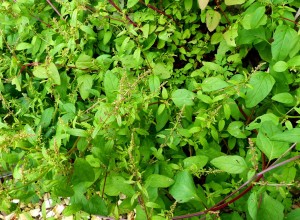 This is a spreading annual with square and rather reddish stems, which are not mealy (unlike many members of the genus), the leaves are simple, oval and more or less untoothed, the inflorescence is of tiny green flowers.

An archaeophyte (i.e. naturalised  in Britain prior to AD 1500), it grows on waste ground and arable land, common in southern England uncommon elsewhere.