The Orchidaceae in brief:

An example from the Orchidaceae: Ophrys apifera (The Bee Orchid) 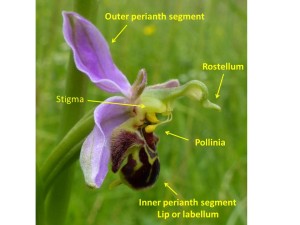 A familiar and beautiful species with the labellum furry and bee-like, hence the specific name “apifera” from “apis” meaning bee. The leaves are grey-green and elliptical-oblong, pointed, in a basal rosette and also along the glabrous stem. The flowers are large (to 3 cm) and spaced out up the stem, the sepals are rosy pink and with green veins, the two upper petals are shorter and stocky, downy, greenish, the labellum is bee-like, brown and furry, convex and blunt tipped. The rostellum is large and shaped like a ducks head and the pollinia long stalked.  Not an especially rare species and can be frequent in calcareous and damp grassland also colonising disturbed ground and quarries.