The Ranunculaceae takes its name from Rana (the latin name for the frog) due to the aquatic nature of many Ranunculaceae, e.g. The Spearworts (Ranunculus lingua and R.flammula), the Water-crowfoots (Ranunculus spp.), Marsh Marigold (Caltha palustris).  But there are also terrestrial species such as Wood Anemone (Anemone nemorosa), Pasque flower (Pulsatilla vulgaris), the climber Old Man’s Beard (Clematis vitalba) and the Hellebores (Helleborus spp.). Ranunculaceae are found in a wide range of habitats; grassland, woodland, arable fields, streams and marshes.

Example of the Ranunculaceae:

Ranunculus (Buttercups) – The terrestrial buttercups, and some of the aquatic buttercups, have bright yellow petals and many stamens and many carpels.  Superficially looking like the Cinquefoils (Potentilla spp.) in the Rosaceae, but Ranunculus has no stipules and no epicalyx both of which we find in Potentilla. 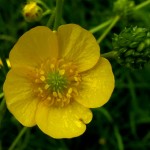 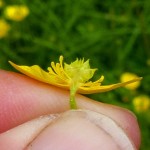 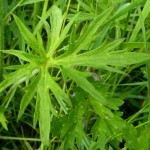 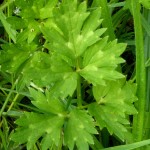 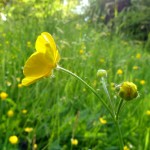 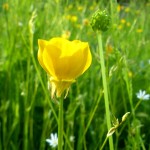 Click on the images (once then once again) to get a better view!

There are three common terrestrial species of Ranunculus in Britain and they look superficially similar but can be told apart if you look carefully at the growth habit, the leaves, roots and the sepals on the flowers.

Ranunculus repens (Creeping buttercup) – a plant of medium height to 60 cm tall, leaves with 3-lobes often with pale-whitish blotches, plant spreading by creeping runners (stolons) rooting at the nodes, flowers with sepals spreading, not reflexed, common arable and garden weed and also very common in damp grassland and many other habitats.

Ranunculus bulbosus (Bulbous Buttercup) – a shorter plant to 40 cm tall, leaves with 3-lobes no white blotches, base of plant with swollen stem tuber (which is a corm (like crocus) rather than the bulb (like onion) that the name suggests), flowers with sepals reflexed (bent back), this is the clincher when in flower (look for the corm when not), common in dry grassland often on base rich soils.