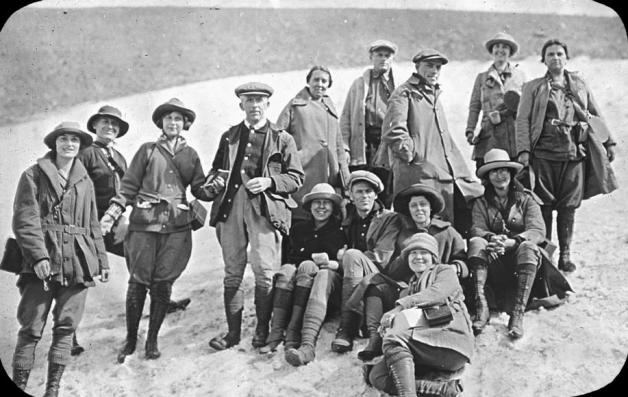 With International Women’s Day on Sunday 8th March Dr M is wondering, could botany be the most gender neutral profession?

It would be nice to think so, but a glance into botanical history suggests otherwise.

Back in the 18th century, dallying with Linnaeus’ sexual system of plant taxonomy and classification was certainly considered an unsuitable occupation for a lady!

Indeed, as Sandra Knapp has pointed out, his system was controversial at the time and he was accused of being a botanical pornographer, and his rivals criticised his system as ‘loathsome harlotry (scortationes quasi destabiles)’.

It was certainly thought that ladies shouldn’t deliberately look at the sexual parts of plants, perish the thought! But it’s no joke, and  no doubt impeded the progress of women in botany at the time.

By the 1920s the situation had improved and the featured image shows George Damon Fuller and botany students from University of Chicago Department of Botany field ecology class in Yellowstone National Park Wyoming in 1923.

Bang up-to-date and Sunday 8th March is International Women’s day and Dr M celebrates botany for all whatever race, colour, creed or gender, with peering, poking and prodding the sexual parts of plants par for the botanical course!

So then, who’s your favourite notable significant female botanist?

Well, there are, Dr M is delighted to say, plenty to choose from, check these lists here and here.

It is, perhaps, invidious to list living botanists, so here Dr M provides a list of female botanists no longer with us in body but very much with us in terms of their botanical legacy.

The list is far, far from exhaustive and simply reflects a few, eleven in fact, of the botanists that Dr M has encountered in one way or another and who have inspired him in his own botanical life journey, check the names to see their achievements:

Of these, Dr M remembers especially the botany text books by Esau Anatomy of Seed Plants and Arber Monocotyledons were central to his botany studies at Bangor University back in the 1970s.

Then the wonderful illustrations by Stella Ross-Craig have been a favourite of his since he first discovered the superb and vividly accurate botanical illustrations in the multi-volumes of her magnum opus “Drawings of British Plants”.

Dr M’s list is highly selective and totally temperate/northern-hemisphere, and he would be delighted to hear about women botanical movers and shakers from the tropics and sub-tropics and other distant botanical lands.

As for a featured female botanist, Dr M’s roving botanical eye, never one to immediately opt for the obvious, has alighted on Hildegard of Bingen (1098-1179), who was introduced to him by a women botanist a few years back.

She was elected a magistra by her fellow nuns in 1136, she founded the monasteries of Rupertsberg in 1150, and Eibingen in 1165.

One of her works as a composer, the Ordo Virtutum, is an early example of liturgical drama and arguably the oldest surviving morality play.

She wrote theological, botanical, and medicinal texts, as well as letters, liturgical songs, and poems, while supervising miniature illuminations in the Rupertsberg manuscript of her first work, Scivias.

Hildegard’s botanical skills come to the for in her treatise Physica on herbalism and heath and healting.

In honour to her contributions to herbal medicine, the plant genus Hildegardia is named after her.

Not only religion but philosophy, not only philosophy but botany, not only botany but medicine, not only medicine but poetry, not only poetry but drama, not only drama but music, Hildegard was a true polymath.

If you are not familiar with Hildegard’s music then you could be in for a surprise, her ground-breaking music forms one of the largest repertoires among medieval composers.

It’s wondrous music, and here’s a taster: a fitting part of a soundtrack for International Women’s Day: