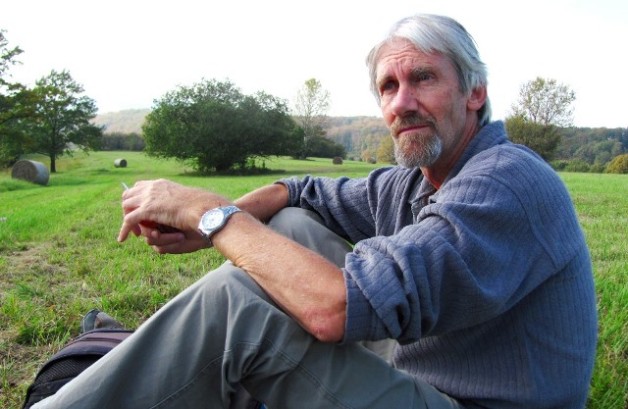 Dr M is delighted to introduce this botanical selfie from Jan Wim Jongepier, a Dutchman who has made his  home in the little town of Veseli in south Moravia in the Czech Republic near to the border with Slovakia. Dr M first met Jan Wim when he attended a summer botanical trip organised by the British Ecological Society and hosted by Jan Wim and his wife Ivana Jongepierova, way back. The actual date is hidden in the mists of time, but Dr M recalls an amazing trip which included visits to flower-rich hay meadows the like of which he had previously only dreamed.  The trip was a huge success also for visits to ancient castles, wine cellars (with sampling) and Czech folk music, a veritable cultural extravaganza in fact!

During the trip, Jan Wim’s wife Ivana, a scientist at the Administration of the White Carpathians Protected Landscape Area and a member of NGO “Bílé Karpaty”, discovering Dr M was rather partial to grasslands, persuaded him to help design a field experiment on the restoration of flower-rich hay meadows in the region. The rest as they say is history and Dr M has returned regularly to monitor the experiment, write up scientific publications on the work, also to help in the production of a magnificent book on the Grasslands of the White Carpathian Mountains. These visits are made the more enjoyable for the botanising in wonderful landscapes, the sampling of local produce including Czech beer and plum brandy (slivovice) and the great Czech hospitality. But enough if this, over to Jan Wim:

I am… Jan Willem (Wim) Jongepier – in Czechia better known as ‘Honza’, not a botanist, just a person with a great love of plants and mushrooms. Born and raised in the province of Zeeland, the Netherlands, I have been living and working in south-east Moravia, Czech Republic since the Spring of 1989 just half a year before the Velvet Revolution broke out. In the Netherlands I studied civil engineering, taught mathematics and computer programming, but currently I am an English teacher at a Czech grammar school.

I got my interest for plants… through searching for fresh grass and herbs for my guinea pigs, especially after winter, but the greatest inspiration was my best friend Henk Schat, who had handbooks on seashells, water invertebrates, trees and many other plant and animal groups, given by his grandparents. Inevitably, he later got a degree in biology. After having built up a collection of about 170 species of seashells, we then focused on vascular plants, which we looked for on our bicycle rides through the countryside and identified with a flora. We even set up a modest herbarium, which proved to be useful to correct some of our misidentifications. I remember one of them was Euphorbia helioscopia misidentified as Chrysosplenium alternifolium…

I studied plants in the field… initially with Henk on our joint tours, later with Dutch botanists at national excursions, and then often on my own. I learned a lot by doing ‘grid mapping’ for the National Herbarium, Leiden, which meant recording vascular plant species in 5 x 5 km grid squares.

I have worked with plants… since I was about ten years old, gradually building up my knowledge of Dutch plant species, later also including those growing at holiday destinations, and then of Czech species, particularly of the White Carpathian Mountains. Most of my work includes finding, photographing, collecting, identifying and drying plants. Interesting finds have been published in separate articles. My most extensive work is an overview of all vascular plant species (nearly 1,500 taxa) recorded in the White Carpathians Protected Landscape Area and Biosphere Reserve, published in 2006. 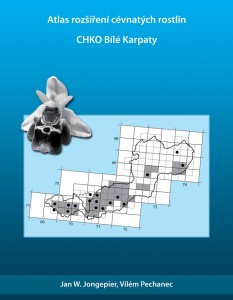 My research/interest area… geographically speaking, is the White Carpathian Mountains. on the border of Czechia and Slovakia. Not only is it close to the place where I live, but the area also exhibits grasslands with an unusual richness in flowering plants, with up to 75 different species in a quadrat of 1.5 x 1.5 m and 110 species in an area of 20 m² (Wilson et al. 2012). However, my main interest is not the orchids or other rare and beautiful grassland flowers, but arable weeds and ruderals. This is because I like the new and unusual, and these plants are dynamic and ephemeral in nature, appearing in disturbed and man-made habitats, some of them quite unexpectedly, and then disappearing through competition from other plants or man. So you can often find me looking for plants in gardens and edges of arable field, along paths and in streets, at railway stations and harbours and the like.

The biggest challenge for botany today… I have a dream. Wouldn’t it be lovely if modern techniques like fingerprinting and DNA analyses would lead to a sort of final solution in taxonomy? Wouldn’t it be beautiful to know definitively how many species the Chenopodium album aggregate really includes and which taxa in the genus Dactylorhiza are good species? Developments go fast, so these questions might be answered within a few years. But let’s hope this dream of high technology improving botany will eventually not turn into a nightmare. What should we think of the introduction of portable plant-identifiers able to do the botanist’s work? Would botanists be doomed to lose their jobs? Well, one thing is clear: in the near future botanists are awaiting substantial changes.

My favourite plants… to admire are the weeds and ruderals, especially of course the less common ones like Galium tricornutum or Bupleurum rotundifolium. An exciting plant to observe at dusk is Oenothera biennis (and related species), whose flowers open at that time with incredible speed. However, I can’t get enough of photographing Orchis militaris (Military Orchid).

Being a vegetarian, plants are indispensable for me to survive. Besides consuming the commonly available fruit and vegetables, I like tasting and eating wild plants as well, favouring the Brassicaceae, Rosaceae, Apiaceae and Lamiaceae families. Outside of these, I recommend Allium ursinum and Chenopodium album agg., prepared as spinach. A wide range of herbs can also be used in salads. Trying them out, I was surprised to find that the taste of Diplotaxis leaves is nicely spicy, strongly reminiscent of the fashionable rucola (Eruca sativa).  My favourite medicinal plant is garlic (Allium sativum). I have successfully solved toothache with a slice of a garlic clove, and garlic has been proved to help against other infections as well. I do not believe much in the medicinal properties of Wild Plum (Prunus domestica) in the form of plum-brandy or slivovitz, commonly used in Central and Eastern Europe against all kinds of illnesses. If it helps, it must be because of the alcohol, not the fruits. 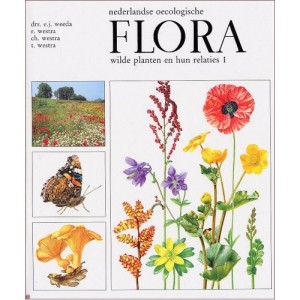 My botanical superhero… is Eddy Weeda, a Dutch botanist and plant ecologist. He not only knows practically every plant growing in the Netherlands, but also has broad knowledge of the ecology and phytosociological classification of each species. Fortunately he has published his knowledge in a series of beautifully illustrated books under the title “Dutch Ecological Flora – Wild plants and their relationships”, in which he describes plant species in terms of structure, habitat (relation with other plants) and other ecological relationships, particularly animals (mostly insects, but also humans) and mushrooms. Interestingly he also characterises entire genera and families ecologically, and the text is written in a style accessible to any plant lover.