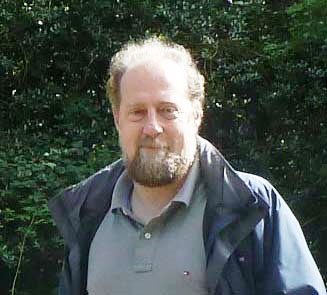 Dr M is delighted to continue this series of botanical selfies with a colleague, Richard Bateman, visiting Professor at University of Reading, whose wit and wisdom has leavened many a board of studies meeting. Richard is a fan of motorbikes, palaeobotany, European orchids and good beer but not of fools, foolishness nor of glib soundbites! A relative magnum opus this, so settle down and enjoy the ride!

I am… a natural scientist – obsessive, politely stubborn, individualistic, opinionated, uncompromising, idealistic (and therefore pessimistic) … Oh, I see … you meant what is my job?! Well, I’ve been unwaged for the last four years and at age 56 appear to have become unemployable, presently operating as an unpaid research Fellow at Royal Botanic Gardens Kew and a Visiting Professor at the University of Reading. But in more lucrative days I was first Director of Science at the Royal Botanic Gardens Edinburgh and then the penultimate head of the very last of the UK’s Botany Department’s to be merged into obscurity – that of the Natural History Museum. In my copious spare time I have enjoyed the relative freedom afforded by promoting several independent scientific societies.

I got into botany… at an exceptionally early age. According to my (plant- and especially animal-loving) mother, my first word was ‘mama’ and my second (gurgled to a garden-loving neighbour) was “Mesembryanthemum’. Admittedly, my father challenges my mother’s account of my early history, understandably arguing for the priority of ‘dada’. By the age of 12 I had appropriated one quarter of my stepfather’s greenhouse, then his own father’s demise allowed me to inherit a half-rotten 6’ x 4’ greenhouse; this I renovated and immediately populated with plants, including three orchids. Within four years I had crammed two larger greenhouses to the gunwales with tropical orchids. Then disaster struck, in the form of a virulent strain of tobacco mosaic virus that all but destroyed my plant collection. Recollecting a recent A-level field trip to a strip of chalk downland rich in native orchids, I decided that studying orchids that grew themselves might be a less traumatic (and less expensive) prospect. I therefore conceived a field survey via motorcycle of the orchids of my home county (Hertfordshire) and adjacent areas, beginning a love affair with European orchids that so far has lasted 37 years. 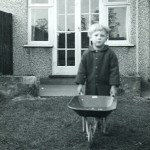 An early foray into horticulture, aged 3 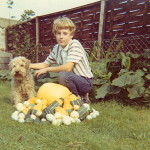 Evidence of a transient obsession with Cucurbitaceae, aged 13

I studied botany… for just eight days! My comprehensive school didn’t offer A-level Botany, so I avidly consumed the modest amount of classical botany included in the Biology syllabus at that time … which was of course far more than anyone can find in any A-level Biology syllabus today. This modicum of knowledge was sufficient gain me entry to the Botany BSc at Bedford College (then part of London University), where I barely lasted a week! Never the most patient of folk, I found that I hadn’t learned anything new during the first eight days of lecturing. Finances were also problematic, so I left.

This rash decision led to seven years working as a full-time technician in an agricultural research laboratory while pursuing two part-time BSc degrees, the first in life sciences and the second in earth sciences. Finally, I was unleashed on an unsuspecting doctoral market at the comparatively advanced age of 26. By then, I had accumulated several peer-reviewed papers, split between palaeoenvironment reconstruction and orchid systematics, and had become a proficient sedimentologist and mineralogist during work time and a field botanist and morphometrician during my spare time. Presented with a spectacularly wide range of offers of doctoral positions, I accepted a palaeobotanical project that usefully drew on both my biological and geological backgrounds. The tortoise had become a hare! 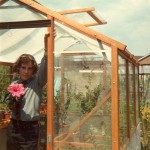 Installing his new tropical glasshouse for orchids and at least one Hibiscus, aged 15 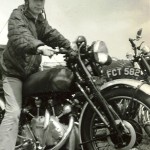 Trying to persuade his father that botany is actually a macho occupation, aged 15 (father’s motorcycle is a 1000cc 1950 Vincent Comet)

I have worked with plants… arguably since my early teens (much depends on the chosen definitions of ‘work’ and ‘plant’) … and I guess I always will. Between the ages of 13 to 26 I was a botanical hobbyist, and between the ages 26 to 39 I was employed wholly or partly as a palaeobotanist rather than a neobotanist, focusing on Carboniferous fossils. It could further be argued that my resignation from the Natural History Museum in 2006 returned me to the ranks of amateur botanists. Such labels are of decreasing relevance in today’s unstructured job market, and in any case, it is primarily hobbyists who are keeping field botany alive in the UK today. Also, these vicissitudes may have influenced the nature of the research that I pursue, and the level of support that I can draw upon, but they have never seriously impeded the flow of research papers from my beloved iMac.

Unlike colleagues who view science as the antithesis of religion, I view science AS a religion – and moreover a fundamentalist religion, centred very simply on the constant search for quasi-objective truths. This principle extends well beyond a mere job, or even a mere career, to become a blueprint for life. Such fundamentalism was never likely to sit comfortably alongside the increasing politicisation of science and consequent emphasis placed on short-term economic factors requiring pragmatic and/or compromise ‘solutions’.

One consequence of the erosion of academic autonomy has been the increasing expectation that senior figures who are brave enough accept greater responsibility should no longer work with plants, nobly abandoning hands-on research in order to manage large teams full-time. I regard this argument as analogous to arguing that one should cease having sex and instead hire a gigolo to have sex on one’s behalf. By definition, a botanist works on (and instinctively loves) plants. Not grant proposals or committees, nor a disembodied gene or a single crop cultivar – a botanist works on PLANTS. ‘Modern’ academic managers please note – all other activities, including fund-raising, are unquestionably important but they are means to an end, not ends in themselves. THE goal is adding to the sum total of human knowledge, and there is no other goal in existence that is of equal importance. It is a deeply satisfying goal to which anyone can contribute, given sufficient commitment.

My research/interest area… is unusually difficult to pin down; sometimes to my cost, I have been much better at acquiring new research projects than abandoning old ones, though I have been known to place individual projects in abeyance for a decade or more to await technological and/or conceptual advances. Palaeoenvironments now play only cameo roles in my outputs, but I still generate modest amounts of work on Palaeozoic and Mesozoic plant fossils (mainly clubmosses and seed-plants, respectively), particularly those that are exceptionally well-preserved and so can be inserted into morphological phylogenies designed to reconstruct evolutionary relationships. Traditional approaches to reconstructing fossil plants that use two-dimensional sectioning plus scanning electron microscopy are now being supplemented with higher-tech approaches such as synchrotron microtomography.

The majority of my current outputs within the neobotanical realm concern temperate orchids, building upon early work that relied primarily on large-scale morphometric field surveys plus microscopic study. As they became available I added to my repertoire first molecular phylogenetics, then population genetics of the orchids, eventually extended to encompass co-occurring symbiotic fungi. Current experimentation being pursued in the laboratory by valued collaborators across Europe includes epigenetics and next-generation sequencing.

From a conceptual viewpoint, much of my research concerns integrating diverse data sources to best circumscribe species, determining the evolutionary relationships of those species, and ultimately seeking to infer the underlying speciation mechanisms. I have a particular bee in my bonnet that neodarwinian views of evolution, particularly those relying primarily on perceived directional or disruptive selection, are being pursued too superficially and accepted too readily, often being based on inadequate approaches to estimating fitness. Each case-study in which I am actively involved points toward a different evolutionary mechanism, reinforcing my belief that a diversity of mechanisms underlies the observed (and inspiring) diversity of botanical form.

The biggest challenge for botany today… is the same as that for any other non-medical research discipline in today’s pressurised, highly competitive, economically oriented research environment – justifying, in the face of increasingly concerted opposition, the pursuit of intellectually stimulating research that neither yields immediate economic rewards nor accrues the huge overheads required by modern employers to squander on non-scientific activities. The result is a negative feedback loop, whereby a discipline under pressure shrinks, thereby attracting less funding, fewer citations and fewer prospective students, thereby shrinking further after failing to achieve ‘one-size-fits-all’ academic targets. In the complete absence of centralised control to assess how much botanical research – and how many home-grown botanists – the UK actually needs, this regrettable trend is difficult for anyone, however committed, to reverse. Perhaps the current furore surrounding major science staff reductions at the Royal Botanic Gardens Kew will bring these crucial issues to a wider audience?

My favourite plant to eat/use… Now you’re not going to catch me out like that! It seems to have become de rigueur to justify botanical research largely in terms of immediate economic benefit to mankind, thereby playing into the hands of the monetarist philistines. Economically important plants are without doubt THE cornerstone of civilisation, but casting all research in such terms cruelly constrains botanical research and reduces the probability of achieving major discoveries. Even David Attenborough felt that either time-lapse motion or interaction with a (moving) animal was necessary to make plant appear interesting when he developed The Private Life of Plants. The more you understand the biology of a plant the more fascinating it becomes in its own right, even if its charisma is initially well hidden. 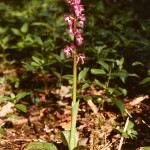 I’m tempted to select as my favourite plant one of the ‘tyre-track’ Carboniferous clubmoss trees, constructed so differently from any extant tree and a major component of northern hemisphere coals (economic impact, anyone?!). But surely my choice has to be a British orchid. In my eyes, the cutest species (also one of the most biologically intriguing) is the beautifully adapted, pseudocopulatory Fly Orchid. However, upon reflection, I feel obliged to select the less obviously charismatic Early-purple Orchid. Discovering a small population of this species in my early teens along the margin of our local golf course first prompted my interest in native orchids – an interest soon reinforced by finding an ‘in memoriam’ copy of Victor Summerhayes’ superb Wild Orchids of Britain in my school library.

My botanical superhero… has yet to make himself/herself known to me.

My web presence… is largely confined to depositing pdfs of my peer-reviewed papers on any website that will accept them, though I do have plans to also upload my raft of less formal publications. I’ve always felt that it was desirable to publish at least one comparatively accessible article for each hard-core scientific paper that I produce.