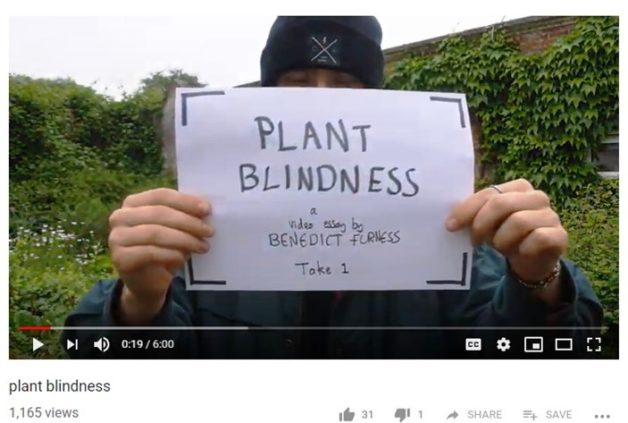 Dr M says: The critical concept of Plant Blindness has featured on drmgoeswild.com before, for example, Dawn Saunder’s post in the botanical selfie series in March 2015 and Dr M’s account of his lecture tour of Japan in May 2018.  The recent video essay by Bath Spa student Benedict Furness featured here came to Dr M’s attention when a link from Benedict’s tutor at Bath Spa University appeared on Twitter.  Dr M was so impressed with the effective and powerful way this video dealt with the issues and was quick to get in contact with Benedict. The result is the additional essay set out below as an introduction to his video posted below that.  Benedict now continues the story:

“The video was originally produced as a coursework item for my final year ‘Digital Imaging’ module, run by Graham Smith, at Bath Spa University. The module sought to partner traditional scientific study with communication and creativity. My assessment brief was focused on these principles. With an overarching theme of ‘Seeing the Unseen’, we were tasked with producing a six-minute video on a contemporary biological issue of our choice. Having been given free reign of topic, I gravitated towards one which I felt particularly strongly about.

I first came across the term Plant Blindness during my first-year undergraduate studies. Fascinated by the concept, I decided to read up on it further. For those who don’t know, Plant Blindness is the name given to the biological phenomenon whereby humans fail to notice the plants present in their external environments. As explained in the video, this often leads humans to the conclusion that plants serve as nothing more than an insignificant backdrop to animal life. Such attitudes are unhelpful to all humans and devastating in the minds of policy makers.

As someone who had produced a plethora of papers and essays detailing the innermost intricacies of plant biology, I could not help but feel somewhat guilty. Yes, I could outline the fundamental differences between Gymnosperms and Angiosperms, perhaps, at a push, I could describe the subtle differences between the C3 and C4 photosynthetic pathways. But, tell you how many oak trees I passed by on my walk from my house to the university bus stop, I could not. There was a discourse in the way I interacted with plants academically, and in my normal, day to day life. Just like many other people, I was guilty of Plant Blindness.

Presented with the opportunity to communicate a biological issue of my choice potentially to hundreds of my contemporaries, I saw no better topic than Plant Blindness. Having never produced a video before, I armed myself with one of the university’s video cameras and took to the streets, hoping to build up some sort of portfolio of ambient plant shots, taken in proximity to humans and human society. A fern creeping through the cracks in a pavement illustrated far better the concept of plant blindness than did an old oak tree deep in the woods. Soon I had filled folders with interesting clips and images, spanning multiple seasons and inadvertently, multiple continents. Then came the time to stitch them together, into something coherent.

To communicate my ideas efficiently, I opted for the ‘voice over’, a technique championed by documentary makers and video essayists. Whilst I may not have possessed the technical knowledge and experience of even the freshest first-year film-school student, I did have, like many of my age, a substantial YouTube watch-history. Dotted here and there, were the sources of inspiration and insight I needed to construct an effective communicational video. Creators like Evan Puschak (Nerdwriter), Polyphonic and Jack Nugent (Now You See It) are masters in the field of video essays.

For the most part, a video essay is identical to the classical written essay, with a subtle difference: they are communicated through the medium of moving pictures and sound. Both forms open with a question, or a statement of intent: what is plant blindness? Both forms proceed to pick the question apart, open new lines of thought, propose secondary questions and provide evidence in support of it all. And both forms ultimately arrive at a conclusion, a summary of information that the audience can latch on to and use to form their own opinions. This is how science has been communicated for centuries, the video essay can be considered merely an audio-visual upgrade. My enthusiasm for plants, my desire to communicate and my love of YouTube ultimately came together in the production of this video essay, which has now been viewed over one thousand times, by people all over the world.

Confronting plant blindness will take time, a concerted effort to promote plants through education might act to shift our perspectives. At its root, plant blindness is an evolutionary and psychological phenomenon, intrinsic to human nature. But textbooks can be rewritten more easily than can our genome. The way we interact with plants can change for the better. If more people stopped to count the number of oak trees spanning their walk to work, we might be on our way to a brighter, greener future.”