If it’s plant ID books you are looking for then check Dr M’s review here.

If its botany of the more literary and philosophical variety then read on! 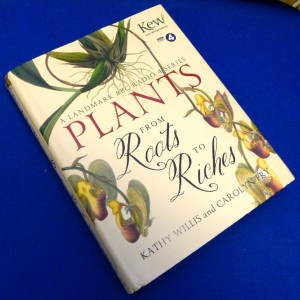 First up is “From Roots to Riches” the book of the landmark BBC radio 4 series by Cathy Willis (Kew) and Carolyn Fry.

This book takes a botanical journey through the scientific life of the unique British institution which is Kew Gardens: and explores how the last 250 years have transformed our relationship with plants.

Through the course of 25 episodes (chapters) the authors take the reader on a journey from the birth of botany as a science right up-to-date with the most recent developments. They delve into Kew’s archive and world-class collections and begin with Carl Linnaeus and his invention of the universal language to name plants, through Joseph Banks’ exotic discoveries and how Charles Darwin’s fascination with orchids helped persuade doubters about evolution. As the British Empire painted the atlas red, explorers, adventurers and scientists risked their lives to bring the most interesting plant specimens and information back to London, and to Kew. From the lucrative races to control rubber, quinine and coffee to understanding the causes of the potato famine, the science of plants has taught us fascinating and enormously valuable lessons.

Each chapter tells a unique and fascinating story, but, gathered together, a great picture unfolds, of the development of a most remarkable science, the magic and beauty of plants and ultimately our dependency on them. 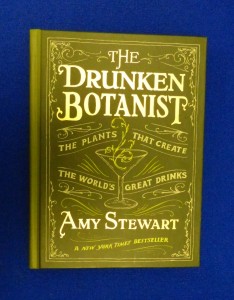 Next up “The Drunken Botanist” by Amy Stewart with a very different take on botany “every great drink starts with a plant” she says and uses this simple truth as a starting point for a fascinating book. The first part of the book covers the classic booze-worthy plants, the ones used most often to produce alcohol. Here you’ll find agave, apple, barley, corn, grapes, and onward through wheat. She discusses the history of each crop and its history as an ingredient in beverage alcohol. She doesn’t shy away from unpleasant facts, either, such as the sustainability crisis facing agave agriculture in Mexico.  The first part concludes with a look at less-common plants that have been turned into booze: bananas, cassava, parsnips, and even Dr M’s favourite tree, the monkey puzzle!

In part two, she turns her green thumb toward the flavouring elements that go into alcoholic beverages. She first covers herbs and spices – allspice, angelica, bison grass, cardamom, gentian, ginger, juniper, liquorice and its relatives, vanilla, wormwood, and many others. Then she tackles the flowers – chamomile, hops, jasmine, rose, etc. Next up are trees—angostura, birch, cinchona, cinnamon, sugar maple. Next up is fruit—apricots, currents, figs, and the variety of citrus fruits, among others. Finally, she takes a look at nuts and seeds: almond, coffee, hazelnut, kola nut, and walnut.

In part three, the shortest part of the book, does she tackle the topic of infusions, syrups, home-made liqueurs, and pickles and even instructions on home-brining olives.  Finally, though it’s not a plant and therefore not botanical at all, Stewart takes the time to discuss a topic without which, none of these wondrous drinks would be possible: yeast. 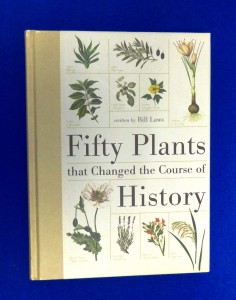 Third up  is “Fifty plants that changed the world” by Bill Laws. This is a beautifully presented guide to the plants that have had great impact on human civilization. Each plant featured includes a description of the plant, its botanical name, its native range and its primary functions – edible, medicinal, commercial or practical. 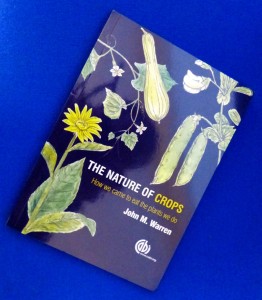 Fourth is “The Nature of Crops” by Dr M’s friend and colleague Professor John Warren who takes a sideways and humorous look at the sex lives of our most cherished plant crops and asks why we eat only a couple of hundred plant species when our botanical world is replete with thousands of edible plants.

Producing enough food to feed an ever-expanding population is one of the great challenges in global food security.  Around half of the total calories consumed by humans come from just three crops – wheat, maize and rice.  With that in mind, the author asks why, out of the almost half-a-million plant species thought to exist on the planet, why we don’t eat the plants that we don’t?  The author quickly debunks the key popular misconception that we don’t eat plants because they are poisonous or harmful.  Quite the opposite is the case and years of experimentation have shown that we have succeeded in domesticating many crops that have high levels of toxins (e.g. potatoes) or that ripening or sufficient cooking can ameliorate the effects of other toxins.  Cassava, fifth on the list of plants consumed by Homo sapiens, contains enough cyanide to kill us if eaten raw, and the akee –staple of the Jamaican national dish of salt fish and akee – can kill impatient locals who can’t wait for the fruit to ripen.  Indeed, the toxins in many plant species are just what makes them so attractive to (at least some) humans – habañero chillies weigh in at around 400,000 – 500,000 on the Scoville scale, but how many of us would fancy tacking the naga chilli (923,000 units)?  And forget eating – what about the pharmacologically active compounds in legal (e.g. tobacco) and not-so-legal (e.g. cannabis) crops? 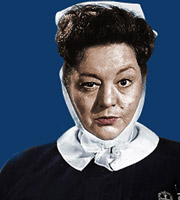 As it turns out, one of the most important concepts of what makes a good crop is that of reproduction – sex, or lack thereof.  Vegetative propagation is key to the production of many crops, and reproductive isolation of the putative crop plant from its wild progenitors is often an important step in the domestication process.  A complete chapter is devoted to the weird and wonderful sex lives of plants and – not surprisingly – we very often find ourselves in “Carry On” territory.  Sections of Chapter 3 entitled “Behind the fig leaf”, “Papaya – the sex-change king, queen and more besides” and “Avocado – the flasher” (Ooooh – Matron!!) are fascinatingly funny.

The book is littered throughout with many anecdotes on historical reasons why we do and don’t eat various plants.  When it all comes down to it, though, we still have the important question of why we eat the plants that we do, and not others.  The author’s answer is a simple one – ourselves.  He argues that we are conservative and / or complacent in our choice of foods, but does acknowledge that very often, necessity (i.e. famine) has been the mother of invention. 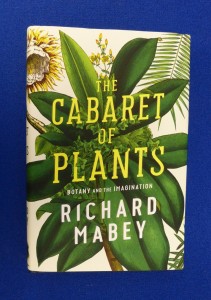 Last but by no means least, “The Cabaret of Plants” by the doyenne of botanical and natural history writing Richard Mabey.

This elegant and beautiful volume is a masterful, globe-trotting exploration of the relationship between humans and the kingdom of plants and is a rich, sweeping, and wonderfully readable work of botanical history. It explores dozens of plant species that for millennia have challenged our imaginations, awoken our wonder, and upturned our ideas about history, science, beauty, and belief. Going back to the beginnings of human history, Mabey shows how flowers, trees, and plants have been central to human experience not just as sources of food and medicine but as objects of worship, actors in creation myths, and symbols of war and peace, life and death.

Writing in a celebrated style that the Economist calls “delightful and casually learned,” Mabey takes readers from the Himalayas to Madagascar to the Amazon to our own backyards. He ranges through the work of writers, artists, and scientists such as da Vinci, Keats, Darwin, and van Gogh and across nearly 40,000 years of human history: Ice Age images of plant life in ancient cave art and the earliest representations of the Garden of Eden; Newton’s apple and gravity, Priestley’s sprig of mint and photosynthesis, and Wordsworth’s daffodils; the history of cultivated plants such as maize, ginseng, and cotton; and the ways the sturdy oak became the symbol of British nationhood and the giant sequoia came to epitomize the spirit of America.

These are edited extracts from the the dust jackets and the following book reviews:

The Nature of Crops