Dr M has previously posted reviews of the two indispensable eXtreme botanical books: the veg key and the book of Stace. The eXtreme botanist just cannot be without these on their shelves.

But also important are the illustrated plant ID guides to supplement the advanced ID books. You need to be able to check determinations against descriptions of the plant in the floras but also against reliable pictures: line drawings, colour illustrations or photographs. This is where the illustrated guides come in.

So here, Dr M checks out and weighs up the current contenders and finds that, we are rather spoilt for choice when it comes to wildflower guides, but that is no bad position to be in!

There are five illustrated wildflower guides and related volumes in the bookshops, and the commentary below gives Dr M’s own personal views on some of the strengths and the weaknesses of each one.

To illustrate the format of each book, Dr M has selected the first of the 30 most common British plant species which is found in all of these five books: Achillea millefolium (Yarrow).

The books are reviewed below in order of publication date and with prices according to NHBS and Summerfield Books: 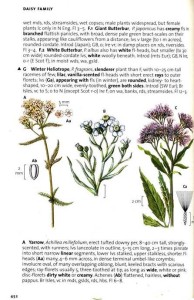 The Wildflower Key (2006) by Francis Rose and Clare O’Reilly (£24.99 from NHBS, £22.50 from Summerfield books).  This classic volume was the first of these five to be published (1981 authored by Francis Rose alone) and revised in 2006 (by Clare O’Reilly while she was undertaking the MSc Plant Diversity at the University of Reading, a busy year for her!).  The Wildflower key has been the mainstay for field botanists for decades, but now, in 2013, they are facing some stiff competition! Strengths of the Wild Flower Key are  the inclusion of all the native and long-established wildflower species you are likely to find in Britain plus more recently introduced species, a really good illustrated glossary, good dichotomous keys for identification of families, genera and species, good plant descriptions and helpful boxes setting out the key characters which separate tricky species. Weaknesses include the out-of-date taxonomy, the narrow range of plant groups covered (no grasses, sedges rushes or ferns, clubmosses and horsetails) and the illustrations, which are not always up to the task. In addition, a minor point, but Dr M does not like use of letters/numbers rather than names against illustrations, this means you cannot flick through the book to help you learn plants, you always have to cross-check against the text. 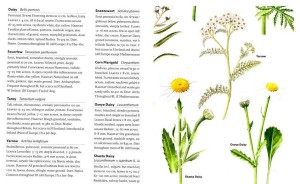 Collins Flower Guide (2010) by David Streeter (£19.99 from NHBS; £18 from Summerfield books).  This book was published in 2009 (large format) and 2010 (field guide format). Taxonomically this was unfortunate timing, coming just before the reorganisation of some major plant families by the Angiosperm Phylogeny Group (APG3) and also arriving just before the 3rd edition of the Book of Stace (2010).  So, the Latin plant names in Streeter’s book are out of date in places, e.g. Scrophulariaceae and Liliaceae have since been radically organised. Streeter’s strengths include the wide coverage of plant groups – including all native vascular plants including grasses, sedges, rushes, conifers and ferns plus many introduced species, the lovely illustrated glossary, the keys presented in range of formats to help ID the 20 most common plants families as well as all the rest. David Streeter has a knack for producing really good, workable keys which makes this a really good book for learning and using keys to identify the whole British vascular plant flora. There is also a large format hard-back which is not that expensive but too big to use in the field!  Streeter’s weaknesses include the partially out-of-date taxonomy, the relatively brief descriptions of plants and the rather washed out colour reproduction of the illustrations. In addition, Dr M does not like use of just the common names against the illustrations and would much prefer both Latin and common names to avoid having to cross-refer from illustrations to text all the time. 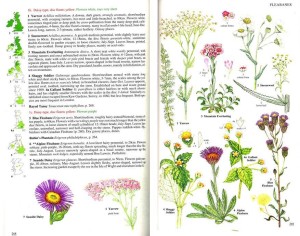 Wild Flowers of Britain and Ireland (2013) by Marjorie Blamey, Richard Fitter and Alastair Fitter (£18.99 from NHBS; £15.95 from Summerfield Books).  This is one of three wildflower books published in 2013, a vintage year!  Here Dr M must declare an interest for an earlier incarnation of this book (Wild Flowers of Britain and Northern Europe, 1974) was the first wildflower book Dr M used as a botany undergraduate at Bangor University in the 1970s. He still treasures the volume, with its scribbled annotations, made during his early botanical years when eXtreme botany was not even a twinkle in his eye!  This new book is a completely revised, updated and expanded version. Strengths include the wide coverage of plant groups with all native vascular plants including grasses, sedges, rushes, conifers and ferns, clubmosses and horsetails plus many introduced species, and the handy (though rather tiny) distribution maps. Weaknesses include the often very brief descriptions, the rather rudimentary keys which are mainly based on organisation on the pages rather than dichotomous keys, these are not to Dr M’s taste, though this might work for some.  Blamey’s illustrations rather divide opinion, although the colours are vivid, the botanical detail is not always accurate (the illustrated glossary is a case in point with some rather curious depictions).  Other minor details, this book gives just the common names against the illustrations not favoured by Dr M as indicated above, also Dr M is not a fan of including two indexes, one of common names and one of Latin names, better to combine these so that beginners and more advanced users are using (and learning from) the same source. 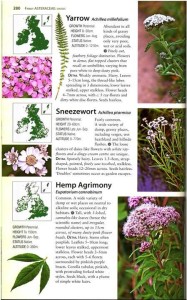 Harrap’s Wild Flowers (2013) by Simon Harrap (£16.99 from NHBS, £14.95 from Summerfield books). Also published in 2013, this is a completely new book and  differs from those above in being a photo guide. But this is much more than just a photo guide, it is a botanically well informed field guide.  The coverage is limited to plants likely to be most frequently encountered, excluding many of the rarities.  Also excluded are grasses, sedges, rushes, ferns, club mosses and horsetails. The book’s strengths include the photographs, which are not only beautiful, but also very carefully selected to show key features and with additional inserts showing details such as leaves and fruits. Another strength is the compact layout with all the details of each plant, including clear distribution maps, in one place (including Latin and common names), none of the other books (Averis apart) do this. There is a decent glossary – though Dr M would have preferred more illustrations here.  This is a stunning looking volume, and if this were a beauty competition Harrap would win hands down! Weaknesses include the limited coverage of plant groups, and the absence of any keys at all. Harrap’s philosophy here is that “the many photographs in this guide will do the job as well [as any keys] if not better”. This not Dr M’s preference, flicking through images, though a useful plant-learning pastime, is no substitute for learning plant by using keys! 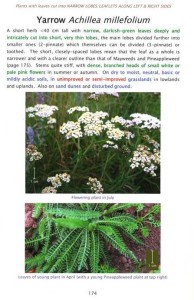 Plants and Habitats: An introduction to common plants and their habitats in Britain and Ireland (2013) by Ben Averis (£24.99 from NHBS, £24.95 from Summerfield books). This is the third of the 2013 publications and another brand new guy on the block.  But this is a different beast, compared to the above four more standard wild flower guides. Averis has produced an altogether new kind of book designed to show common plants (700 species in total) and the vegetation in which you find them.  This is very much a labour of love and Ben Averis is an experienced botanical teacher and trainer and is keen to avoid what he sees as the unnecessary jargon and complexity  of traditional illustrated floras. So here he presents a plain English guide with minimal botanical terms to confuse and befuddle the beginning eXtreme botanist  Paradoxically, in his presentation of vegetation features, he uses the straight NVC codes (MG5, CG2, W25 etc) which, though useful to those in the know, is going to be rather baffling to the beginner. Strengths of this volume include the page per plant approach and the photos which, although not always beautiful, are taken to show important ID features.  Weaknesses include the absence of dichotomous keys, although there are plenty of tables of ID features for some key plant groups, e.g. grasses.  In addition, Dr M is not a fan of the ordering of plants by  leaf type, as Averis does here, some may like this approach (which somewhat mirrors the veg key), but Dr M prefers an ordering by family to enhance the learning of family characters which is so essential for sustained botanical learning.

So who wins?  Well that would be to miss the point of this review, it’s a case of apples and pears and horses and courses.  So much depends on what you are looking for and what works for you. The good news is that we are now blessed with at least five great wild flower guides to British plants, each with positive strengths but also some weaknesses.  You may agree or disagree with Dr M’s analysis, and this is one reason why he has resisted electing a single winner.

Beginners will likely take to Harrap and Averis because they have clearly been designed with them in mind. But both books have somewhat limited botanical scope.

Those looking for more complete coverage of plant groups, especially into the challenging, but hugely rewarding, territories of grasses, sedges, rushes and ferns etc will need to think about Streeter and Blamey et al..

Fans of Rose and O’Reilly may not be won away by the newer, glossier books, however one or two of the newer books might be recruited to join it on their shelves! Surely there will continue to be new recruits to Rose and O’Reilly for its undoubted authoritative botanical charms and it remains a classic of its kind.

Dr M’s Coda: Dr M plans a class exercise with his MSc botany students in 2014 when he will split them into seven groups at random and provide each group with the same set of common and less common plants and each group will get one of these five books or the Book of Stace and the veg key. Groups will work on the plants to test the ease and speed of accurate identification! eXtreme botanical camparisons and contrasts and an interesting and informative exercise for sure!

Dr M’s Post Script: Dr M has never been the biggest fan of photo guides, often because they tend to be either good photographically and poor botanically, or vice versa. Harrap is the first guide Dr M has seen where the photographs and the botany are on a par.  The quality of photographic reproduction that we can find now in the digital age of the 21st century is extraordinary and improving year on year.

Add to that the potential for digital manipulation to create wonderfully informative as well as stunning botanical illustrations. Check out the work of Niki Simpson – who provided many of the illustrations for the veg key – for the state of this art.

Dr M says: A book with this quality of images, including all the British flora and with good, workable keys would be a formidable volume indeed!

Dr M concludes: 2013 has been a bumper year for wild flower guides, and these will serve the eXtreme botanist for the while, but it is nice to have something even bigger and even better to hope for!

As ever, watch this botanical space…