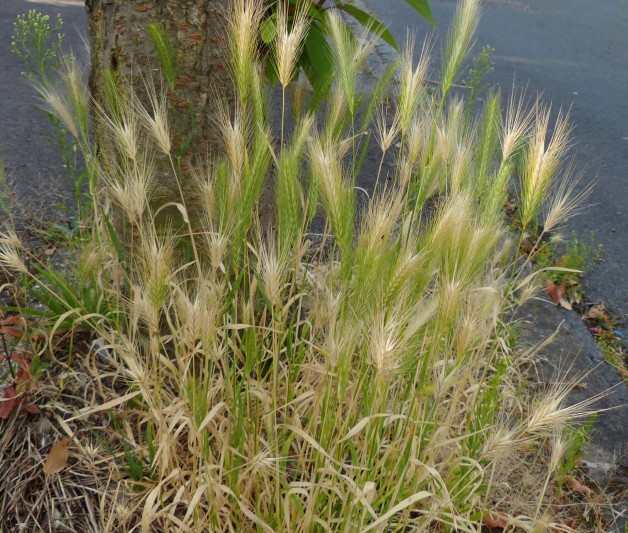 Dr M now turns his attention to the tribe Triticeae with 6 genera in Britain including the domesticated crop species and their wild relatives wheat (Triticum) and Barley (Hordeum) and Rye (Secale).

A relatively small tribe then, but not without its complexities, as Cope & Gray (2009) note: “the tribe as a whole is plagued with taxonomic uncertainties, difficulties of identification and rampant hybridisation both within and between genera“!  Dr M likes the bit about rampant hybridisation, nice turn of phrase!

One complication for the British genera, the genus Elymus (the couch grasses) as recognised by Cope & Gray has been subdivided into two genera – Elymus and Elytrigia – by the Book of Stace and other British authors. There is also the old name for couch grass (Agropyron repens) which you may come across in older texts.  As in previous Poaceae tribe posts, Dr M here follows the taxonomy in Cope & Gray, but provides synonyms as required for the species discussed below.

So what can we say about the Triticeae?

Well, auricles are important in Triticeae. Auricles are outgrowths at the junction of ;eaf blade and sheath which wrap around and hug the sheath.  Auricles are very useful for grass ID and if you find a grass with auricles your ID work is immediately reduced, because not so many genera and species have them. Now, although we have come across the Poaceous auricle before (Lolium in Poeae often has auricles, and we have seen pointy auricles in Bromeae (Bromus ramosus) a number of genera and species in Triticeae have leaves with auricles  (e.g. Hordeum and Elymus). 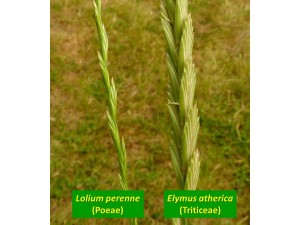 The inflorescence is a single bilateral raceme and the spikelets are one-many flowered, laterally compressed, and positioned alternately in 2 opposite rows, broadside to the axis.

Compare with Poeae e.g. Lolium, where the spikelets are also positioned alternately but edgewise along the rachis.

The glumes are persistent and shorter or narrower than the lemma, leaving it exposed. The lemmas are 5-11 nerved, with or without a straight or recurved (geniculate) awn from the tip. 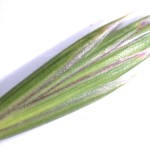 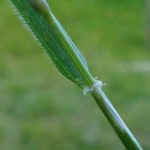 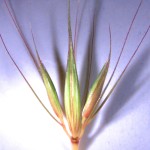 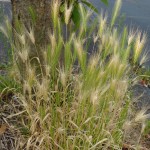 Hordeum murinum in the dog zone!

Elymus repens (Syn. Elytrigia repens, Couch Grass or Twitch). Green, often glaucous perennial, extensively rhizomatous making this possibly the worst weed in the temperate zone. The leaf sheath is usually glabrous and there are falcate (sickle-shaped) auricles, while the leaf blade is loosely hairy on the upper surface. Raceme stiff and 7.5-13.5 cm long. Spikelets 12-18 mm and 4-7 flowered. Lemmas 9-14 mm sometimes with an awn to 5.5. mm. Widespread and abundant in arable farmland, gardens and waste ground and a wide range of other more natural habitats.

Next tribe is the Brachypodieae, one UK genus, nice and simple!